Writer/director John Ridley Talks about his Hendrix Pic, All is By My Side 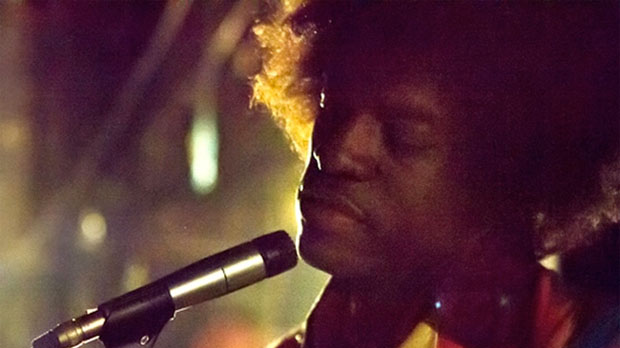 All Is By My Side

All is By My Side, Biopic, Jimi Hendrix, John Ridley, Toronto International Film Festival 2013

With so many overstuffed biographical dramas barreling from cradle to grave, the creative possibilities of the intimate biopic, one focused on a formative and often little known period in a subject’s life, are often neglected by writers and directors. Thankfully, though, that’s the approach taken by screenwriter and second-time director John Ridley to one of the most iconic and fan-obsessed-over cultural figures of the 20th century, Jimi Hendrix. Starring André Benjamin (Outkast’s André 3000) as the iconic singer and guitarist, All Is By My Side focuses on a year or so in Hendrix’s life and how a song written for a British woman, Linda Keith (played in the film by Imogen Poots), began the musician’s journey from Jimmy James to Jimi Hendrix.

Even as it presents a story involving such a legend, All Is By My Side is a personal labor of love for Ridley, who worked seven years to make the film independently. I spoke with him before the Toronto International Film Festival about the challenges of capturing Hendrix, working with Benjamin, and how he’s changed as a director on this second film.

Filmmaker: Why did you decide to focus on such a short period of Jimi Hendrix’s life in All is By My Side?

Ridley: The idea of doing a Hendrix biopic has been out there for a long time. I’ve always considered myself a Hendrix fan, so people had approached me, and we’d been back and forth on different ways of telling the story. Years ago, for whatever reason, I was listening to some Hendrix outtakes on the Internet, and there was a song that I had never heard before, one that had not been formerly released. They were busted outtakes, takes that weren’t really going anywhere, and I almost clicked the [browser] window closed. And then on the fifth take, Jimi kicks into this piece of music that was one of the most emotional, powerful, resonating pieces of music I’ve ever heard. It was called “Sending My Love to Linda,” and I said to myself, “Who is Linda? Who is this person this guy is writing this song for because clearly he is working some things out here?” And as I went back and I researched who this person was, her connection to Jimi and that amazing year of his life, I said to myself, this is the story. This is a story with emotional velocity that has been largely unreported and that has its own mythology. I ended up doing a lot of research, including a piece for NPR about Linda Keith, that time period, and about that song very specifically. The cradle-to-grave biopic has been done. It’s been done sometimes with great success, sometimes with moderate success. And the cradle-to-grave biopic with Jimi Hendrix has been done too. That specific story has been told. For me, any story has got to be relevant and informative. And this time, this space, this relationship, what he went through, the changes, leaving New York City as Jimmy James and coming back as Jimi Hendrix, that hasn’t been explored.

Filmmaker: When you’re making a movie about an icon like Jimi Hendrix, is it important to capture his iconic elements? Or is it more about creating your own original take on him as a person?

Ridley: It’s got to be new. If the only thing you’re doing is giving people what they know, there’s almost no point in doing it. I think the thing with Jimi Hendrix is a lot of us have those images locked in our mind. He’s an icon for a reason. But, for me, it was very important to portray him as a human being. Whether it’s him or the president of the United States, you’ve got to get under the skin [of a movie subject]. Otherwise, you’re just regurgitating what everyone knows. You’ve got to dig deeper. And certainly, André with his performance, he was all about that as well. That’s why André was such a terrific partner, because he didn’t want to just go a Vegas lounge act version of Jimi Hendrix.

Filmmaker: What was different then about the way people made connections to rock stars as compared to today?

Ridley: One of the interesting things about Jimi and that time is that the immediacy of a lot of his performances did not hit the same way [music performance] does now in the era of YouTube. When Jimi was on Dick Cavett in 1969, right after playing Woodstock, there was still an incredible amount of people in America who did not know who he was. Dick Cavett played his Monterey performance where he’s smashing guitars and has a headband on and a really blown-out fro. And Jimi’s watching this as he’s seated there and he’s saying, “That’s not me anymore, that’s not who I am or what I’m doing now.”

Filmmaker: How long have you been working on this film?

Filmmaker: And what made you go a more independent route with the production?

Ridley: There was a time I went in and pitched it [to a studio] and the people I was pitching it to said, “We don’t get it.” It’s one thing when people say, “I don’t like it.” That is their prerogative. But when you’re talking about history and something that really happened and people say, “I don’t get it,” that to me that was the breaking point. It became something not for other people to get or not get, it became something for me to go and do. That was really the inciting incident and in some ways, that was a good thing. You need something that’s going to push you and make you say if it’s going to get done, you’ve got to go and do it.

Filmmaker: Aside from all his obvious qualities, what made you decide Andre was the right actor to play Hendrix?

Ridley: André was likeminded in the sense that he didn’t want to do just the tics and idiosyncrasies people would associate with Jimi Hendrix. André was a student of this individual in every way, shape and form — the written history, the oral history, the physical history. A lot of people know about his music, but I don’t think they really have a true understanding of his musical philosophy or what he tried to accomplish. A lot of people just label him as a psychedelic rocker, which ironically is a phrase that Jimmy hated. He hated that concept of psychedelic rock. He just thought it was flashing colors on a screen behind the artist and turning up the music really loudly. André was a person who really was willing to devote himself to all aspects of playing this character. There were times when André would show up on the set with a really arcane story about Jimi to tell me. He knew I was so steeped in these stories, so he would push me. I would go, “Okay great, I got to go find a story that André’s never heard before,” and I’d try to come back the next day with something. That was great because it made us go back and say, “Okay, I think I know everything but…” It was a push across the board for all of us involved with this film to go, “Okay what else? What else? What else?”

Filmmaker: Did this film go through various iterations over the seven years?

Ridley: It certainly did in the writing because for me it was about trying to dig as deeply emotionally into the story. Again, it wasn’t about hitting moments that people already knew. And because I knew I was going to be hitting a lot of moments that people were unfamiliar with, it forced me to make sure that the emotion moment-to-moment, beat-to-beat was as impactful as it could possibly be. When people are sitting down with something that’s unfamiliar, I think at times there are moments in any story where [the audience feels], “Okay, get to that moment that I know.” It’s like when you go see your favorite band and they’re playing all their greatest hits and then they play a couple of new songs off the album. You’re like, “I love you guys but get back to that song that I know.” I wanted to make sure that [the new] moments were emotional, were emotive. I wanted to make sure the audience felt that, so in the writing of the script, I took the time because, also, I had the time. There was no rush with it. It was a continually evolving process but again, when you don’t have to hit a certain release date, when you’re not under the microscope of a studio, you have that space to evolve. And for me, that was very special, to be able to say, “Okay, I love the script the way it is, what else can I do? What more can I do? How can I change things?” And ultimately I believe the script benefited from the ability to evolve moment-to-moment and not have to rush to any one destination.

Filmmaker: How do you think you’ve changed as a director from this film and your first feature?

Ridley: Two things. One, it really begins with the people you surround yourself with. You have to surround yourself with people who are likeminded, who are creative and who in some ways aren’t afraid to speak up. And you have to allow for that creative space as well. You want people to see things the same way that you see things but at the same time, you want people to see things beyond where you’re going, to offer up things. As a writer/director, you’ve got the big things covered but it’s the little things, those little moments that really make a difference, and they can come from anywhere. You’ve got to be open to any terrific idea and create that environment where people aren’t afraid to go, what about this or how about if we do that? It starts with people you can completely trust. Certainly coming out of that first film I had a better sense about those people. And I don’t mean trust in terms of finances or things like that but just creatively. The other thing for me, the big deal, is as a writer-director, when you really get into the tail ends of pre-production, the thing you’ve got to remind yourself is that you’re way ahead of the story. You have to learn to slow down a little bit and allow for creativity to happen in the moment. Particularly with a passion project that you’ve been working on for seven years, there is that temptation to go, “Look, I know what I want and this is the way that it needs to be.” You certainly can never give that up, but you also can’t get ahead of the story. [You must] allow for that creativity. If you’re driving from Los Angeles to New York, you know you want to get to New York. If you’re the director, you’re going to get to New York. But, you have to allow for side trips just to see what’s there. That’s where I think this film really, really came alive. I want people to feel that sense of discovery and curiosity and those places, those elements discovered along the way, remain the most powerful for me.