by Mary Anderson Casavant
in Festivals & Events, Filmmaking
on Apr 28, 2010 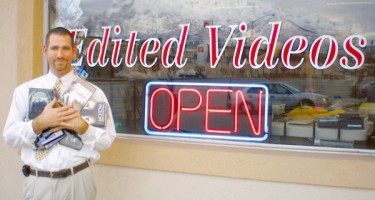 Despite being born and bred on our shores, Mormonism is still something of a fringe religion. For a lot of Americans, there’s something vaguely worrying about its army of clean-cut, nametag wearing missionaries. Neither Hollywood nor the independent film scene have  helped the Mormon case for normalcy – their portrayals tend to fixate on the church’s checkered history with polygamy.

Last night’s Stranger Than Fiction featured Cleanflix, a sympathetic look at the more mainstream side of Mormon culture. Directed by Andrew James and Joshua Ligairi, two filmmakers who grew up in the tradition (James is no longer practicing, but Ligairi still is), the documentary follows the rise and fall of a chain of small Utah-based video stores, who specialize in editing “objectionable” material out of R-rated movies. Hollywood finds out, and the lawsuits start flying.

A third act scandal reveals that even the most “clean” business has its own fair share of cads and perverts. Luckily for us, the filmmakers avoid exploiting the scandal for tabloid fodder, concentrating instead on the sadness at the core of the scandal. By focusing on the Mormon side of the fight, the filmmakers humanize the bright and shiny faces behind the fastest growing faith group in American history.

I spoke to Andrew James and Joshua Ligairi before the screening.

James: I think there’s this perception that they are in buggies like the Amish. Mormons aren’t as old-fashioned as everyone thinks, and that’s what Cleanflix touches on.

Filmmaker: Like Cleanflix, your film re-edits footage from major Hollywood films.  What’s the difference between what you do and what Cleanflix did?

James: We didn’t not pay attention to the rules. We hired a lawyer and went through a rigorous process to make sure the clips were legal and obeyed fair use.

Ligairi: We were using movie clips in a journalistic way to illustrate a point and tell a story within a historical context. The sanitizer were simply censoring content and claiming fair use because they happened to sell the DVDs to some schools. There is a huge difference.

Filmmaker: There’s a sex scandal that involves one of your main characters late in the film. Did you have any inkling about what was going to come out?

James: We heard rumors all along…We weren’t sure how that was going to play out in the narrative in the film…It took him getting arrested for us to put it in.

Ligairi: It was a big revelation to the public. All the information we presented matter of factly to the public wasn’t presented that way to the clientele. I think it was a huge surprise to people who spent money at the store.

Filmmaker: The main voice of in defense of Hollywood in the film is Neil Labute. Did you approach any other directors?

James: We tried, but at that point, it was who are you, you don’t have any big films…. We did get a few responses, but the schedules didn’t quite work out…We decided to really go after Neil Labute because of the Mormon angle.

Filmmaker: What has been the Mormon response?

James: The film hasn’t played in Utah…There are a lot of people within the Mormon community that wouldn’t watch the film. It’s something we’ve kind of joked about. I’ve thought about doing a clean version so we can present these ideas to them.

Ligairi: Ironically, I think it’s something Mormons could point to, something positive that humanizes them to a Christian audiences…At screenings, other Christians have been surprised by how much they had in common with other communities –

James: I think they (Mormon viewers) might like the fact that the perspective is even handed. — Mary Anderson Casavant