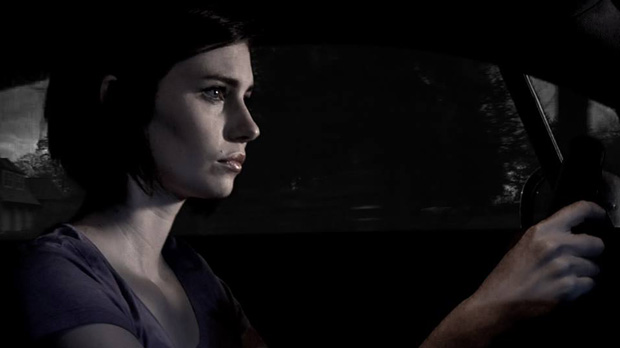 by Randy Astle
in Directors, Filmmaking, Interviews, Transmedia
on Oct 7, 2013

Tokyo Sally is the second narrative feature by director-cinematographer-editor Kal, after his 2010 debut Superhero in the Rain. He’s also a prolific producer of music videos, documentaries, and spots for companies like the Food Network. The Tokyo Sally project, which features Anna Adams, consists of one 60-minute film and a related app, Tokyo Sally: Lost Highway, both of which are nearing completion. Kal envisions the film as the first in a series of ten pictures that will explore different aspects of horror and suspense films; each will be self-contained but, when seen together, will relate to a larger story.

The film — which Kal describes as a mixed homage to Tarantino, Hitchcock, Leone, and The Twilight Zone — is about Dahlia (Adams), who works the night shifts at a cafe. As Kal says, “Break-ups are hard and Dahlia is just learning that firsthand as her boyfriend Georgie just skipped town. So at one of the lowest points in her life, I thought it would be fun to have her evening get a whole lot worse. She receives a strange phone call at the cafe and after she hangs up a series of supernatural events begin to unfold. In a sense, the movie is a metaphor for overcoming a break-up, although it’s expressed in a popcorn thriller context.”

I talked with Kal to discuss his filmmaking process and how the app and film complement each other. More info is at Tokyo Sally’s Facebook page and its page on Kal’s website.

Filmmaker: What’s your background and where did the concept for Tokyo Sally come from?

Kal: I was going through a divorce . . . maybe my darkest hour. Tokyo Sally became my metaphor for persevering through a dark time in your life. At the time, I was running Peanut Butter Blues Cafe which emphasized crazy peanut butter sandwich combinations with live music — bluegrass, folk, and, of course, the blues. I would tell customers that we had a sister cafe on the opposite side of the world in Japan called Tokyo Sally’s — a fusion of Japanese and American bites. If I had the money in the bank, I would have really built one. I was working late one night at PB Blues, no customers had come in for a while and the eerie story of Dahlia began unfolding from there. Tokyo Sally is that truth stretched to its fantastical limits.

Filmmaker: Tell me a little bit about the film portion of the project, the plot and the production process.

Kal: I have this stubbornness about filming authentically so if the story takes place at 2 a.m. then I have to have a crew and actors willing to work at 2 a.m. They were willing and we did, but the truth is it’s hard to work at 2 a.m. night after night. We did 10 shoot nights over two months. The first 10 minutes of the film takes place inside Tokyo Sally’s Midnight Cafe & Radio and I wanted to create a sense of claustrophobia for the audience — similar to what Hitchcock did in Rope — and I wanted that claustrophobia to extend all the way through the promotional material — posters, trailers, etc. — so that the viewer was convinced that the film takes place entirely in the cafe. There should be a sense of “opening” when when Dahlia eventually leaves the cafe and enters the cold unknown of that summer night.

Filmmaker: At what point did you decide to create an app to complement the movie? Was it during production or at some point in post?

Kal: The idea for an app came during post-production. We filmed a segment with Anna Adams in which Dahlia is driving while tired and she thinks she is being followed by a zombie in a car. It sounds ridiculous, but the visuals have a dreamy quality to it. Due to visual fx constraints and budget, we weren’t able to include this scene in the movie, but I thought it would be rich and fun to include somewhere and that’s where the idea for the app came about.

Kal: If David Lynch were to make a video game, that’s what Tokyo Sally: Lost Highway would be like. It’s a driving simulation in an ambient dark world. The headlights reach just so far, but not enough to see what’s lurking beyond the bend. Between gameplay we will intermingle unused footage from the film to create a cohesive narrative that will add to the story for Tokyo Sally fans.

Filmmaker: You also developed two other apps along the way, HugBot and Da MouthWasher. What are those and how do they figure into your production process?

Kal: I developed HugBot and Da MouthWasher as test apps using Flash. Many developers don’t realize that Adobe’s Flash has been repurposed as an excellent tool to build cross-platform apps, both Android and iOS. I built the apps in a few weeks and have been using the money to fuel continued production on Tokyo Sally. [HugBot is a comical social networking app that allows users to send funny messages and “hugs”; Da MouthWasher, which “may just be the ultimate stress relief app ever,” cleans up profane messages with hilariously clean language: proceeds from both apps continue to support Tokyo Sally.]

Filmmaker: So do you work with coders or do all of the programming yourself?

Kal: I do all the design and coding myself. I grew up on Pac-Man and Donkey Kong and always loved that generation of video games. My father was a programmer so he taught me how to program and I started building my own. I haven’t programmed a full-fledged game since I was a kid, so this opportunity to revisit my love of video games appeals to me on many levels.

Filmmaker: Then what’s the end game with these two elements? What’s your release strategy and methodology for prompting viewers/users to migrate from one platform to another?

Kal: Similar to what Lost did with their multi-platform marketing of the TV series, I think the Tokyo Sally video game will generate curiosity about the film as well as vice versa: those who have seen the film may be hungry for more and will want to explore the video game for more clues to the Tokyo Sally universe/mythology.

Kal: Most frustrating is that these types of projects take time . . . and when things start coming together, you become more and more eager to share your work with everyone. And rewarding is the flip-side of that: sitting in an audience when your film first screens; it’s exciting to see and hear whether or not the audience reacts to specific scenes the way you had hoped.