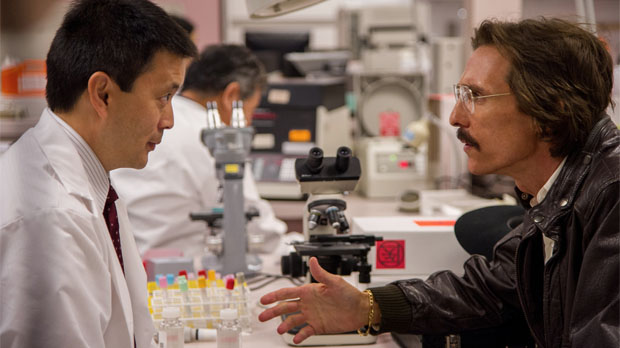 The real-life story of good ol’ boy Ron Woodruff (Matthew McConaughey), a homophobic Texan electrician who discovered he was dying of Aids and decided to fight the system as he fought for his life, Dallas Buyers Club comes out on November 1 through Focus Features.

To celebrate the film’s release, Focus is offering a prize pack of some of the finest films from its back catalogue. Dallas Buyers Club is a strong Oscar contender for its performances by McConaughey and Jared Leto (as transgender drug addict Rayon), so fittingly the Blu-rays up for grabs are also Focus titles that were very successful at the Academy Awards: Joe Wright’s Pride & Prejudice, Michel Gondry’s Eternal Sunshine of the Spotless Mind, Gus Van Sant’s Milk and Ang Lee’s Brokeback Mountain.

There are two prize packs up for grabs, and to win all you have to do is send the answer to the following question to nick AT filmmakermagazine DOT com:

What were the names of the three subsequent films made by Pride and Prejudice director Joe Wright for Focus?