Finding the Right Story to Tell: The Making of AfterDeath (Part 1) 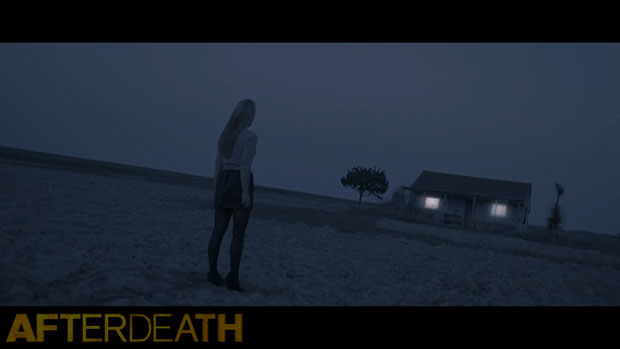 by Michael Murie
in Directors, Interviews, Screenwriting
on Oct 30, 2013

The psychological thriller/horror movie AfterDeath is the first feature film of directors Gez Medinger and Robin Schmidt. Shot on a tight budget and a tight schedule, the development and shooting of AfterDeath offers a lesson to anyone looking to make their first feature. AfterDeath is currently in post-production and is expected to be released in early 2014. Filmmaker spoke to Medinger about the project shortly after shooting wrapped.

Medinger and Schmidt met at Oxford University in the late ’90s. Schmidt was studying English and Medinger was studying engineering. After leaving university, Schmidt became interested in film and video and learned how to edit using Final Cut Pro. Around 2000 they started developing an idea for a TV series about a group of people trying to make a skiing TV show. Says Medinger, “We sent this off to a few different TV companies and they were all interested but we had no experience and rightly they said, ‘Probably not for us.’”

But through that process they met filmmaker Joel Mishcon and skiing instructor Warren Smith, and they ended up making a ski film, Snows in the House.

Schmidt and Mishcon formed Chrome Productions in 2002, planning to make films. Instead, they ended up making corporate and music videos. Music videos, Medinger found, were ultimately unsatisfying: “We’d write 15 brilliant treatments and never get a video and then when you finally do get a video it’s for the one treatment that you rushed out and didn’t really want to make.” On top of that, with music video budgets so tight, “You’re basically expected to lose money on every music video you make, so you’re working for free.”

Note: You can  read an interview with Andrew Ellard, who wrote the script for AfterDeath, here: Andrew Ellard on Writing for Film and Television

Filmmaker: When did you decide you wanted to make a feature film?

Medinger: My goal was always to make feature films, but we started out making a sports film, and then we did TV and music videos, and we were never quite sure about the best way to make a feature film. When we wrote our business plan back in early 2002, I remember writing, “We expect to be in production of our first feature film by 2004-2005,” and as it happened it was 2013 before we actually got there.

Filmmaker: Why did it take you so long to get to that point?

Medinger: There are all sorts of reasons why it took so long, but in a sense it’s amazing that it happened at all because it’s not easy to make a feature film. There are a lot of barriers in the way and not all of those barriers are necessarily real. A lot of them are psychological; you think you have to have this, that and the other in place, and you’re waiting on funding bodies or other people to get behind you. You can end up waiting forever, and I guess that was what happened over the 10-year period from setting up the company and ultimately making the film.

Filmmaker: How did you come up with the idea for AfterDeath?

Medinger: We developed three different projects before we finally came to AfterDeath. The first one was a vampire thriller which ultimately required a budget of more than $1 million to give it the level of production design that you would have to have for the type of film that it was.

The next film was a psychological thriller which again required a bit too much money. The third film was an action comedy and was called Awesome Sauce. If you imagine something like Zoolander with Jackie Chan, then you’d be close to the kind of film it was.

This one was actually the most developed of all of them, and last year we were full speed ahead on Awesome Sauce. We had the fourth draft of the script, we had a business plan, and we were in a pretty good position to go out to investors and raise the budget. But there was a little thing that niggled me about the project which was that the cast that we had weren’t really going to sell the film, and the kind of film that it was, it was going to be slightly Marmite in terms of its comedy.

Medinger: Basically, you love it or hate it.

Also, it had a lot of stunts, production design and a lot of exterior nights, and I was looking at the budget and thinking “even if we mange to make this I can see sales agents and distributors not being able to instantly say, “I know what this is and I know that I can sell it,” and that worried me. 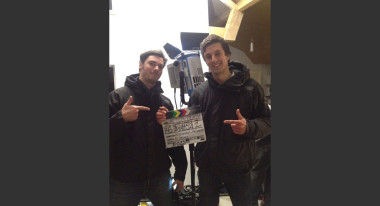 Filmmaker: When did you decide not to continue with Awesome Sauce?

Medinger: I went to a two-day film school that Dov Simens conducted. He was Roger Corman’s production manager for 10 years and he does this two-day class which is brilliant, very inspiring. You can’t learn the industry in two days, but I went there for any little nuggets I could pick up for Awesome Sauce, and what he said was, “For your first feature film, put five kids in a room and chop them up. Shoot it across a week and a weekend either side — a nine-day shoot. Spend the previous five days before that rehearsing it. One location, five kids, super cheap, turn it in for 30,000 bucks and hey presto, there’s your first film done.”

There’s something valid about being smart with what you create and being smart about who the audience is for what you make.

This started off the little niggle that maybe Awesome Sauce wasn’t the right project.

Filmmaker: Where did the idea for AfterDeath come from?

Medinger: Years earlier, we’d talked about adapting the Jean-Paul Sartre play Huis-clos (No Exit), which is the one that’s famous for the expression “Hell is other people.” It’s a one-act, existentialist play about three people who end up in this room in Hell. They’re essentially trying to find redemption from the other people in the room that what they did wasn’t all that bad, but each one of them is the other’s perfect nemesis, and they end up in this merry-go-round where they can never find peace because the only people that can forgive them never will.

And I thought of that as a jumping-off point to make a slightly more intelligent horror film that asks some interesting, modern, philosophical questions that the genre doesn’t usually do. I got quite excited about this idea and thought that it had the ingredients for a project that we could put together.

Filmmaker: How did you make the leap to actually start the movie?

Medinger: After 10 years of saying, “It’s going to happen this year,” I thought we had to take matters into our own hands and make it happen. So we looked at how much money we could definitely raise, and made that the budget, and then tried to figure out, “What can we physically do with this?”

Filmmaker: How did you go from the idea to a script?

Medinger: This was August last year that I had the idea. At that point, I set a target of shooting in February/March 2013, which was going to give me six months to develop and shoot the project. I felt that there was absolutely no reason why that couldn’t happen. 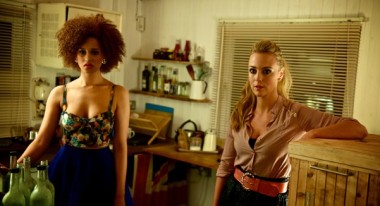 I’ve found that things never happen unless you put a deadline on them; they just get pushed back. And pushed back. When you put a date to it then it seems real. Also, by telling everybody the date it means that you can’t welch out of it and say, “No, I didn’t really mean that.”

I started to develop the story but before writing a 90-page screenplay I wrote a 10-page outline to make sure that I had the story straight. It was quite a big deviation from the play. The problem is that there’s no jeopardy in the play and that doesn’t work on screen because if you’re already in Hell, well can it get any worse? And there wasn’t a normal three-act structure in the play, so you had to identify who your protagonist is going to be, what that journey is going to be, and how it was going to work on the screen structurally.

Filmmaker: How did you get Andrew Ellard onboard to write it?

Medinger: I wrote a 10-page treatment and sent it off to Andrew, who I’d become aware of a year or two earlier. Robin and I had made a film for the Sci-Fi London 48-Hour Film Challenge and the film that ultimately won really surprised us because it was a brilliant story, a lovely idea, really well told. A lot of the time, especially in short film, they seem to feel that they can get away with just a sketch, and I don’t think there’s an excuse not to actually tell a story with a beginning, middle, and an end that takes your characters on a journey. The film that won absolutely did that, and Andrew Ellard had written it.

Subsequently, through a Twitter discussion, we had sent the script for Awesome Sauce to Andrew. This was a few months before I started developing what became AfterDeath, and the notes I got back from him were incredibly incisive. It was clear he shared the same sense for structure that I did.

When it came to developing AfterDeath, the first thing I did was send this treatment to him for notes on the story because I wanted to make sure that when I wrote the script I would not waste any time on a structure that didn’t work.

Andrew came back with all sorts of notes on it, one of the most important being, in my version the characters didn’t realize they were dead until the mid-point. He said, “I don’t think you can get away with that. I think people will guess it far sooner than that and I think you’ll end up with a flat first half of the film because the audience guesses something the characters haven’t,” and I think he was ultimately right.

Aside from all these notes he said, “I think you’ve got an absolutely killer premise here and I’d be interested in coming on board as a writer.” At that point, I literally bit Andy’s hand off, because I knew that if I got him on board, not only would I get a better script, but I would also have the next few months to actually produce the project and make it happen. As a filmmaker you often have to wear lots of hats but I find that writing is one where you have to lock yourself away and get into that world to be able to do it. I think I would have found writing and producing quite difficult.