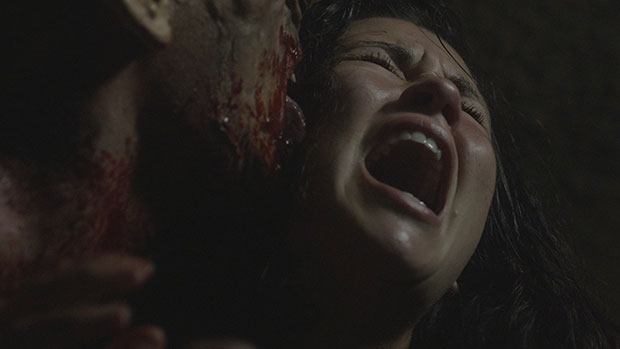 by Michael Murie
in Cinematography, Directors, Filmmaking, Interviews
on Dec 3, 2013

Ryan Lightbourn grew up in the Bahamas, but went to business school in the U.S. Becoming interested in music, Lightbourn transferred to Full Sail University after graduating. He wanted to become a music producer, but after playing with Final Cut Pro he started making “goofy little short films and music videos with my friends.”

Switching to the film program he quickly decided that he could learn more by going out and actually shooting things than by going to class, so he dropped out and bought some gear. He continued shooting music videos, but always wanted to make films, and in 2011 his short film Roid Rage was screened at Screamfest in LA, went viral on YouTube and had over 3 million views. He continued working on short films, and has just completed his first indie feature, Sleepwalkers.

Sleepwalkers, which is currently in postproduction, was shot primarily on the RED Scarlet, but Lightbourn used the Blackmagic Pocket Camera in a couple of key ways to save production time. Ryan recently spoke to us about shooting the film:

Filmmaker: Where did you get the idea for the film?

Lightbourn: I did a film contest when I was in film school called the Annual Zombie International Film Festival. They came to the school with flyers and told everybody to sign up, it was free, and you could win some money. We did a five-minute-long film called Sleepwalkers and we won the contest.

I feel that right now in the low-budget indie horror world there’s a plethora of zombie movies. It’s zombie movie overkill, so I switched it up. Instead of doing zombies, I did underground demons that you could describe as a zombie-vampire hybrid. It’s similar to Neil Marshall’s creatures in The Descent and is heavily influenced by Evil Dead and From Dusk Till Dawn.

Filmmaker: Where did you shoot the film?

Lightbourn: We had a cabin out in Wacissa Springs, which is a completely isolated nature reserve in Florida. We rented this cabin for about $1,800 for two weeks and we could do anything we wanted out there. We could have our actors scream as loud as they can possibly scream, and we could spray blood everywhere. The park was so excited to have us come out there and film a movie they didn’t charge us for a permit and they let us do literally whatever we wanted, it was fantastic.

What we accomplished for the budget was honestly mind blowing and I’m definitely thankful for the cast and the crew that I had. Everybody was working for very small wages, but we all put 1000 percent in to it.

Filmmaker: What was the size of the cast and crew?

Lightbourn: There were six leads and a couple of extras, two guys who played creatures, and there were a couple of small roles here and there, so about 15 in the cast.

For crew, we had a sound engineer, a key grip and two producers, and the AD was one of the actors. When he wasn’t in the film he was ADing, and he did a great job — even if he was in a scene — getting actors rehearsed, getting everything set up while I’m in the background setting up lighting for the next shot.

I was the director, d.p., grip, and almost everything else, which is something I’ve been doing since I dropped out of film school, because my budgets have never really allowed me to hire anybody to help out. 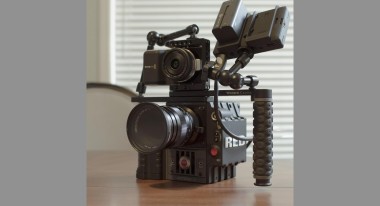 Filmmaker: What did you shoot this with?

We did some interesting techniques throughout the production because we had such a limited budget and schedule. I took the Pocket Camera and mounted it to the Scarlet and got my wide shoots and close-ups at the same time, because it was so small and lightweight. At 1080 delivery the quality was honestly almost spot on between the two cameras

Filmmaker: You also shot at a mini golf course?

Lightbourn: The mini golf course is where the Pocket Camera really came in handy. It was a day where we had a ton of VFX. We had a demon queen who was giving birth to a little person actor that we hired to be the baby demon, and the scenes were short, but they were still intensive and we really needed a full 12-hour day. But we had to shoot in the golf course’s off hours, so we only had about eight hours, which included our setup and breakdown time, and we had to start at 11pm. This meant we had just over six hours of shooting time, and we didn’t really have the money for a second camera operator.

I took the Pocket Camera and a 14mm pancake lens made by Panasonic which is miniscule and weighs practically nothing, and put that on an articulating arm and mounted that with a Wooden Camera mounting plate. Then on the Scarlet I used a Zeiss 50mm lens. In full frame terms, because the Pocket is a 2.88 times crop, I think it was about 40mm, and the Zeiss 50mm on the Scarlet would be something like 80mm.

Because the Pocket was the wide shot, you don’t really see that much of a change in depth of field; the aesthetic isn’t that different going from the Pocket wide to the Scarlet close-up and vice versa. If it were done the other way, it would probably have looked kind of funky, because you would go from a wide with shallower depth of field to a close-up with a fairly wide depth of field. 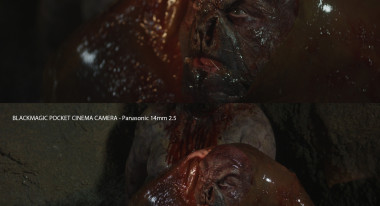 Comparing the field-of-view of the two cameras

Filmmaker: How much of the final picture was shot on the Scarlet vs. the Pocket Camera?

Filmmaker: When cutting footage between the Scarlet and the Pocket there wasn’t really any significance difference between the image?

Lightbourn: No, absolutely not. It’s the dynamic range I think that helps, because the Pocket doesn’t have very shallow depth of field. I bought a Nikon adapter and put some of my Nikkors on there. I know there’s the Metabones Speed Booster, which would of made for more shallow depth of field, but I didn’t have one of those at the time.

I shot a lot wide with the Pocket, and you don’t really see that much of a difference going from the Super 16 sensor to a Super 35 sensor. A lot of those Glidecam shots were wide anyway, and for the close-ups, because I didn’t have a remote focus for the Glidecam I had to keep a constant distance from my actors, so I didn’t mind having a slightly wider depth of field when I was on Glidecam.

Low light is another reason why we used the Pocket from time to time because it was significantly better at ISO 1600 than the Scarlet. I didn’t even want to shoot with the Scarlet over 800. It also has a much higher dynamic range than the Canon 5D Mark III at high ISO’s. At 1600, once you color correct it and export it, I didn’t even need to add noise reduction to the shots we have in the trailer that were at ISO 1600. 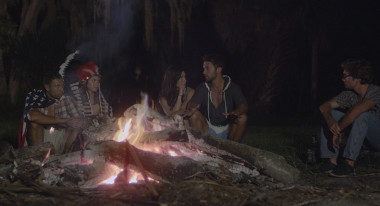 Filmmaker: Are you doing all the editing and postproduction yourself?

Filmmaker: What do you edit in?

Filmmaker: Where are you in post-production and when do you think you might have it finished?

Lightbourn: I recently wrapped the trailer and now we’re starting on the film. We cut the trailer quickly to get it out there to show potential investors because we want to keep this thing going. By the end of January I should have a full draft of the film.

Filmmaker: What did you do for sound?

Lightbourn: We shot separate audio, so I’ve got to sync up all the audio. I use Plural Eyes for that. We just had a reference mic on the Scarlet and I’ve got the reference built in to the Pocket and Plural Eyes does a pretty good job of syncing up sound.

Lightbourn: There are a lot of gunshots and muzzle effects. As far as the blood, we stayed practical. I really, really, hate CG blood; there will be minimal CG blood throughout the movie. We had these guys who work in Universal Studios and do Evil Dead the musical on stage, and they are masters of spraying blood everywhere. This is one of the first times I’ve ever worked on anything that I was satisfied by the amount of blood that I got during production. Things definitely got messy, but I don’t think I’m going to do very much digital blood at all.

I doctored some of our cabin shots. We had a fogger, but sometimes we didn’t have enough fog to fill the entire cabin so I’ve got a couple of smog effects that I’ve dropped over some of our wide shots. If the background behind the cabin is too dark then I throw a mask on top and add a background like trees and a blue sky or something like that, and that definitely helps with the establishing shots.

For the creatures’ eyes, we didn’t have contacts for the actors, so I’m going to brighten up their eyes for the close-ups, and that’s about it.