How Many Films Does The Average Low-Budget Filmmaker Make? 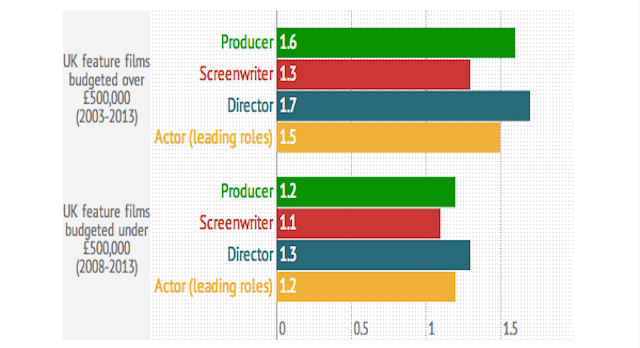 by Sarah Salovaara
in Filmmaking, Production
on Dec 3, 2013

Independent filmmaking is the land of the never-ending benchmark. If you’re not heaving a sigh after finally completing your film, you’re praying it’s accepted into a festival, that someone buys it, that it finds its audience, that you reap a modicum of returns, before daring to do it all over again. Or maybe, not.

With the assistance of BFI, British producer Stephen Follows managed to fashion a list of all UK films budgeted at under £500k since 2008, and over £500k since 2003, for a data comparison on the career trajectories of filmmakers behind 2,737 films. His findings, while vaguely depressing, are nonetheless intriguing. Only 15% of writers, directors, producers and actors continue to work on either side of the budget margin, while just 13% of producers who produced a low budget film go on to make another one. Shocking still, a mere 3% of directors who make their first film go on to make two more.

The infographic above doesn’t exactly paint a pretty picture, but there are some caveats to consider. In low budget filmmaking, producers and actors may not be filling their respective roles out of desire so much as necessity — doing whatever it takes to get the project off the ground. Writers too can sometimes be ambitious actors angling for the right vehicle. Switch-hitting aside, Follows argues that the reason so many independent filmmakers abandon their passion after the first go around is on behalf of unrealistic expectations. Not just about where the film may take you, but also with respect to the sheer amount of work to be put in.

As such, it’s important to be realistic, and honest with oneself. Though technology has democratized the filmmaking process, it still doesn’t mean that it will be an easy progression from your first film to the next. Your investors should be prepared to lose money, and you should be prepared to have an additional fundraising crop. If you (rightfully) wish to recoup funds, you may have to consider budgeting for the unforeseen self-release. You should be prepared and possessed enough to devote a handful of years and exorbitant amounts of energy to the film, in spite of considerable setbacks. Follows suggests that the harsher we are about our prospects, the greater shot we have at longevity.