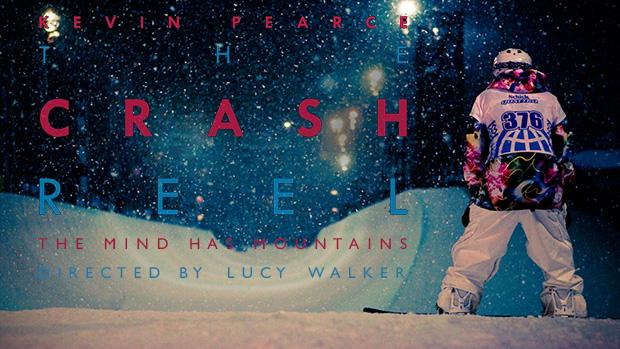 by Michael Murie
in Directors, Production
on Jan 8, 2014

I’ve been to many documentary screenings, and even to some attended by the films’ subjects. But seeing The Crash Reel with its subject, Kevin Pearce, present was one of the most riveting movie screening experiences I’ve ever had.

If you haven’t read about or seen the movie, The Crash Reel follows champion snowboarder Kevin Pearce through a debilitating accident, his recovery and then his slow coming to grips with the fact that he can’t go back to competitive snowboarding. On the face of it, this may sound unappealing, but The Crash Reel is no 60 Minutes bedside weepy. Instead, it is a dramatic story interweaving multiple story lines, all while following the challenges Pearce continues to face.

The film starts just before the accident, then cuts back to Pearce’s biography and the events prior to the accident. Along the way it covers his successes as well as his rivalry with Shaun White, almost managing to paint White, at one point, as an evil nemesis. But then comes the accident, and it’s unclear if Pearce will survive, and if he does survive, what state will he be in?

Of course Pearce does survive, and he’s fortunate that his recovery is close to miraculous. For the average person, it would be a miracle and more than you could pray for, but for a championship snowboarder it’s not nearly enough. His vision is impaired, he has some cognitive problems and spasms in one arm. Doctors tell him he can’t risk having even a minor secondary brain incident. In short, he can’t risk going back to snowboarding. His family doesn’t want him to go back to it, but Pearce is unconvinced, despite interventions from doctors and family.

This is a beautifully constructed film, managing to include several other character’s stories without confusing you, including Pearce’s younger brother David, who suffers from Down Syndrome. It also has some amazing footage and a visually stunning title sequence. 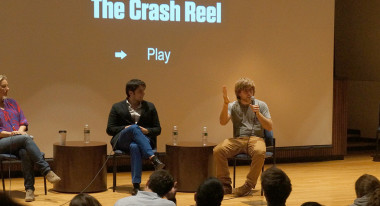 At the screening I attended Pearce and director Lucy Walker were on hand to talk about the movie and his experience. Pearce received a standing ovation when he came on stage, joking, “I knew it was going to be a great day when I got up this morning.”

Watching the movie, consisting of so much footage of events just prior to the accident, as well as footage of the accident, it was easy to assume that the filmmakers had already been following Pearce when the accident happened. But as Walker revealed in the Q & A, she didn’t even know Pearce at that point. “I didn’t meet Kevin until the summer after the crash and I was blown away when I met him,” she said, “but my first thought was that the story happened already and we missed it. But I was so struck by him and then I started to see all the cameras around filming. I heard that the crash itself had been filmed by a random passerby, and I thought maybe there’s enough material that we can put it together.”

Walker talked at some length about the ubiquity of video cameras and how that is changing documentaries, “I think in future you’ll see all kinds of films like this, where you can piece together a story from so much footage that happened to be shot.”

One audience member asked if people found the filming intrusive. Walker said that different people will come to their own conclusions about whether to film something, adding, “Kevin’s brother Adam shot the early stuff in the hospital, and he wasn’t at all sure to start with. He didn’t want to shoot video because he was worried that Kevin was going to die, and he didn’t know what to do. But he also felt this urge to document it, and I think it’s amazing that he was able to do that because it’s so strong to see the very early days. He felt very conflicted when he was shooting it.”

Walker said that another reason she decided to make the documentary is that when she met Pearce she realized the story was not over. Pearce was still hoping to go back to snowboarding. “I thought, maybe he can have one of those great sports comebacks, it’ll be like Rocky. That’s what I hoped, but then I heard that if he hit his head again he could die, and I thought, my god, I hope that doesn’t happen. And then I thought maybe he’ll dig really deep and he’ll reinvent himself, but that’s so hard for anybody, let alone a 22-year-old with a brain injury. I didn’t know what was going to happen but I really wanted to find out, and that’s typical of documentaries; you sometimes don’t know what is going to happen, but you have to know that it’s going to be so interesting.”

In the movie, Pearce clearly wants to go back to snowboarding, and even makes some tentative steps in that direction, which posed a challenge for the filmmakers: what is your responsibility to your subject? Are you there only to document what happens, or should you intervene? Says Walker, “Sometimes when you’re filming you’re the only sensible one in the vicinity, and that’s a different set of pressures. In this case I didn’t have to worry that he was being poorly advised, or that didn’t know what to do with the information I was seeing…. I would have been more worried if the family hadn’t been so magnificent, because I could see these tremendous people around him, and that took the pressure off me.”

Walker told the audience that the feeling we get in the movie, that we don’t know how it will end, is something the moviemakers felt at the time too. Pearce then added that he didn’t know what was going to happen either. “Before this injury I was a snowboarder, and that’s what I could do so well and my life was set. I was 22 and I was making all this money, doing all these amazing things, and I was having so much fun. And then I got injured and I couldn’t do that any more, so now what am I going to do? I didn’t go to college. I didn’t have any other plans of what my life would be except snowboarding.”

Pearce is now a speaker and advocate for families affected by brain injury and Down Syndrome. Pearce makes for a conflicted, and yet compelling spokesman. Clearly he’s concerned about brain injury, but it’s also clear that he might have gone back to snowboarding had he been able to. When asked if there was anything that might of helped him realize his new reality, he says no. “I heard it from the doctors and my family and my friends, and everybody tried to tell me, but it wouldn’t sink into my brain until I actually got to experience it, and that is what it took for me to understand where my abilities were. That was a hard, hard moment for me when I got back on [a snowboard]. I thought I was fine but learning I’m so different now was really difficult.”

Asked if he advocated limitations in extreme sports and whether his feelings had changed since he was injured, he also demurred. Describing himself as the rebellious kid attracted to the lack of rules and freedom of snowboarding, Pearce said “I can tell you, straight-up, 100% that it’s these kids who are pushing the sport. It’s not the sponsors, it’s not the coaches, it’s them wanting to take snowboarding to the next level because there’s so much fun doing it.” He went on to say that he thinks the large half pipes might actually be safer “because there’s more transition. Before it was such a tight transition you had such a small room for error, and I was so unlucky that day. If I was maybe 45 degrees more I wouldn’t have caught my front edge perfectly or maybe I would have gotten my hand out. It was just an unlucky moment. The way I look at it is, stuff happens in life and you’ve just got to deal with it. It’s what makes them so exhilarating and gives you that rush.”

Watching the film, and seeing the stories of others who suffered similar injuries and didn’t survive, or are more seriously impaired, you can’t help but think how lucky Pearce is. And yet, in the context of a successful, champion snowboarder, how unlucky he was as well, and the almost impossible situation he was placed in after the incident. The allure of the sport remained, trying to pull him back in. Nothing before the accident prepared him for that.

In watching this film you can’t help thinking that as we parade and fete modern champions, someone should still be standing behind them, whispering in their ears “memento mori.”

Filmmaker: “It’s Not Enough To Have a Good Story with a Video Camera in the Vicinity”: Lucy Walker on The Crash Reel