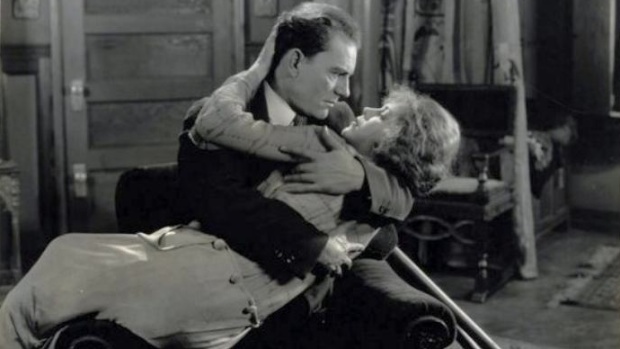 Having kids is hell for your hobbies. After adopting my son, Nicholas, I returned home to discover my father-in-law had boxed up all my DVDs and stored them in the garage to make room for a crib, mobiles, and large, brightly-colored pieces of plastic that light up and buzz. It was just as well. Having a kid is like waking up outside the Matrix—it takes awhile to clean the muck out of your eyes and adjust to the new reality. My horror-fan gorehound friends warned me that watching violent horror films would be much more difficult, that I’d become more hypersensitive to onscreen violence now that I was more in tune with the fragility of life. Oh, please. I had been watching Dario Argento films for so long, geysers of arterial blood were nothing more to me than part of a rococo color scheme. I once watched Cannibal Holocaust while eating a plate of bacon.

Of course, my friends were right. As a new parent, it’s nearly impossible to watch onscreen suffering without thinking of the victim as someone’s child. And if young children are the victims? Forget about it. I was reassured that my skin would someday build back up to its appropriate thickness and I’d be able to indulge in bloodthirsty cinematic voyeurism once again. But until that happened, I needed some other kind of fix—something to keep my hobby alive. I started watching silent films, largely because when holding a sleeping infant, the last thing you want are the sounds of bloodcurdling screams. Plus, I was unlikely to see anything too upsetting. Silent films were objects of nostalgia—they were safe…right?

Right. Here’s how The Penalty, starring Lon Chaney, begins: After a young boy is crippled in a car accident, an incompetent doctor needlessly amputates both of his legs, driving him to grow up and become a murderous criminal.

Everything that drew you to the cinema has been there since the beginning. Even horror. Especially horror. There’s no escaping it. Oh, sure you might not see the Gish sisters drowning in pools of blood and entrails, but dismemberment, metaphysical suffering, torture, even child endangerment…it’s all there. Thankfully I was able to choke back my anxiety attack and push through, because The Penalty is a crackerjack, pulpy, sinister little thriller as potent today as it was in 1920, in spite of a cop-out ending that I’ll talk more about in a bit.

The Penalty began life as a novel by Gouverneur Morris, the great-grandson of the same Gouverneur Morris who became one of America’s founding fathers. Morris’ novel is like a cracked mirror version of something by Horatio Alger—the famous boys’ adventure author that encouraged young men everywhere to “struggle upwards” with optimism and pluck. Morris is more concerned with how tragic acts of fate mold and shape lives. The young protagonist of The Penalty struggles upwards, all right…right to the top of San Francisco’s criminal underworld.

After its opening interlude of psychological child scarring, limb mutilation, and negligent parenting, The Penalty picks up twenty-seven years later as our unnamed protagonist has become a criminal mastermind and taken on the sobriquet “Blizzard.” Chaney famously put his knees in buckets and strapped his legs behind his back during filming, which makes him tougher than Gary Sinise who had his legs digitally erased for Forrest Gump. Chaney hobbles through the streets of the Barbary Coast with freakish dexterity, even leaping onto a table to threaten a room full of starved and abused hat makers. His performance is so electric and savage that very few performances from the silent era can compare. Only Rene Navarre in Louis Feuillade’s Fantomas even comes close.

Now that Blizzard has successfully established his network of crime, he is ready to embark on his master plan to loot the entire city of San Francisco through the brilliant use of hats.

What’s important is that Blizzard gets distracted from his master plan when he sees the opportunity to take revenge on the doctors that crippled him. It comes in the form of the following newspaper advertisement: “WANTED—Model to pose for statue of ‘Satan after the Fall.’ If you think you look like Satan, apply at studio of Barbara Ferris, 32 Institute Place.” Turns out, Barbara Ferris is the daughter of the doctor who crippled Blizzard twenty-seven years ago. This realization leads to one of my favorite moments in the film, in which Blizzard suffers a burst of melancholy and asks two of his agents “Do I look like Satan?” to which they shrug and nod as if to say, “Sure, I guess. I guess you look like Satan.”

While Blizzard is busy posing for sculptures and plotting to crash San Francisco’s economy with hats, the police have sent their best agent, Rose (Ethel Grey Terry), to infiltrate his gang. Her superior hopes that she’ll turn down the assignment—this is no place for a woman, after all—but only a woman will be able to blend in with all the other female hat makers. Naturally, Blizzard is immediately attracted to Rose and invites her into his study to help him play the piano. He can’t reach the pedals, you see. Rose dutifully bends down and works the pedals while Blizzard bangs away at an anguished concerto. The two make beautiful music together; before long, Rose is too captivated by the madman to turn him in to the authorities.

It would be bad form to reveal any more of the plot, but if you’ve been mentally tabulating the pile-up of absurdities (mistaken amputations, coincidental Satan sculpture, mischievous hats), you may safely add “leg grafts” to the list. The Penalty is a hell of a great little film. Until the ending. Without giving anything away, everything you don’t want to happen, winds up happening. A last-second plot device almost makes things right, but not quite. Still, if you can stomach a climax that feels like a bit of a cheat, the rest makes the ride worth the trouble. This was Lon Chaney’s first starring role and he plays it like he knows he’ll never get another chance to make an impression. Even beyond his shocking physical contortions, he commands our attention in every single frame he’s in. Chaney would later join forces with Tod Browning, and while that partnership yielded some great films, The Penalty benefits from not having an auteur at the helm. Director Wallace Worsely had no intention of creating an atmosphere of weirdness the way Browning did. Instead, Chaney was allowed to create the character…then dropped into the real world—our world. The images of Blizzard plodding along the streets of San Francisco are jarring and indelible. Worsely and Chaney later collaborated on Ace of Hearts (1921) and the classic The Hunchback of Notre Dame (1923).

While Kino’s DVD release is probably the preferred means of watching The Penalty today (despite its jarring electronic score), there are also perfectly legal, watchable versions on the internet. My most recent viewing was via YouTube on my iPhone, lying down in my son’s darkened room, waiting for him to drift off…reminding myself of the horrible things that can happen when children play in traffic.

David Lee White currently resides in New Jersey. He is the author of the novel Fantomas in America (available from Black Coat Press) and the plays Blood: A Comedy, Slippery as Sin, White Baby, Random Horrible Thoughts About Love and If I Could in My Hood I Would. He has written articles for Video Watchdog, Geceyarisi Sinemasi, Belphegor and is a contributor to the Turkey edition of the Directory of World Cinema. www.davidleewhite.net