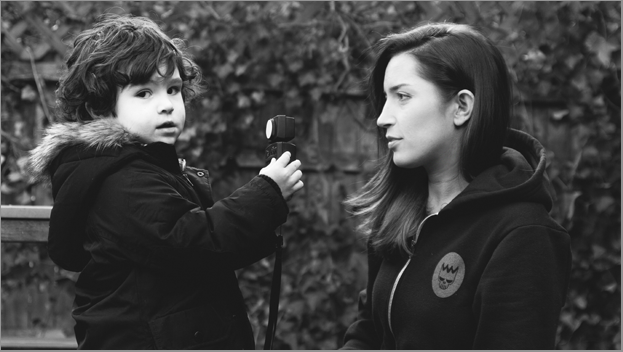 When you meet cinematographer Reed Morano, ASC, you immediately start to think of cultivating ways you could maybe become a little cooler, because she seems to do life – in general – so well. For our photoshoot, Morano invited me over to her home in Brooklyn, which she shares with her husband and two young sons, who are five and three. Her apartment is cozy and magically extends outside into an unusually large Narnia-esque garden, replete with a swing set and slide for her kids to play on. Her kids are like calm, respectful, independent yet obedient unicorns: “We just don’t tell them ‘no’ too often,” Morano explained, “They get to be who they are.”

This seems fitting for a woman who, herself, has carved out her own unique path as one of the film industry’s most sought after cinematographers. Since filming the Oscar-nominated Frozen River several years ago, Morano has shot a string of films which have premiered at Sundance, including two which will be there this year: The Skeleton Twins and War Story.

As for how she does it and why, she shared her answers with me both over email and over tea at her kitchen table, while her kids played quietly in the other room.

Filmmaker: For both your movies: Why this movie? Why did you decide to do it?

Morano: I had met on The Skeleton Twins several times for a long time before it was actually made.  I fell in love with the script that was written by the director, Craig Johnson and Mark Heyman (Black Swan) about two summers before we even did it. The genre is a rare and fun one to work in – a dark comedy/drama.It felt visually like there was a lot to be done and it could be a little bit stylized. My version of stylized, at least. I also bonded with Craig. Every time we spoke about the film, we were on the exact same page about our goals and inspirations for the film.

I was really affected by Mark Jackson’s first feature, Without. It was the kind of movie you see and you wish you were a part of because it had such a precise style and it was very real. It made you feel uncomfortable as the viewer  – those are the kinds of movies I want to make.

Filmmaker: Why do you think you were the right choice to d.p. each film?

Morano: I think being the right choice for a film comes down to your understanding of the narrative of that particular story and your ability to communicate effectively with the director. They should be able to completely trust me as an extension of themselves. I talked with both directors about each film for so long before it happened, that I had so much information to work with once we finally started shooting – it was embedded in me by that point. Aesthetically, I had the same taste as both directors about what we thought was best for each film. The director and the d.p. have to be on the same page or it doesn’t work.

Filmmaker: How much of the entire crew was female? How about your specific camera crew? Was hiring women a consideration for you?

Morano: There were many females on both crews – I would say at least 50/50, if not 60/40 females. Hiring the right person for the job is my number one consideration, male or female – if we get right down to it, personality, skill and work ethic are my criteria. I don’t want someone to take gender into consideration when they are deciding whether or not to hire me, so why would I impose that on someone else? I do not want to be treated special or differently because I’m a woman and I’m a d.p. That’s what I’ve fought so hard for my entire career. I refuse to do that to anyone else. I’m a d.p. and it shouldn’t matter whether I’m a male or female. I can do my job just as well as the next guy.

Morano: Yes, both directors were men. I actually don’t notice a difference working with men vs. women. Every single director is really different and each individual relationship I have is its own animal. I can’t generalize that. I have to say I’m a very good communicator and I’m a diplomatic person, so I’m able to get my opinions heard by everyone. But each director has a different way they like to work with me and/or hear these opinions. It’s my job to learn what that dynamic will be and accommodate it when I’m working with that person.

Filmmaker: What were each of the films shot on? Why did you make those choices?

Morano: Each film was shot on the ALEXA. To be honest, the choice was made out of budgetary restraints. War Story and The Skeleton Twins were both extremely low-budget projects and I wanted the highest quality visuals that we could afford. I’m really learning to love the ALEXA, as long as I can have my favorite older lenses.

Filmmaker: Tell me about the emotions of making each film.

Morano: Skeleton was a very light and fun shoot although the subject matter was a little dark (it’s about suicide). The heart of the film does have some honest, funny moments and being on set with Bill Hader and Kristen Wiig, it was hard not to laugh. A lot of that also had to do with Craig, the director – he’s just a funny guy, always smiling. Additionally I got to do shoot some really cool, challenging things – I shot all the underwater footage myself and it was an amazing time shooting and lighting underwater for a few days.

War Story was a very, trying intense and difficult shoot – relocating our whole family to Sicily for the shoot was stressful for myself and my kids and the subject matter of that film is truly dark. It’s a psychological drama and I know it was very difficult for Catherine Keener to live in that role – she played a prisoner of war. Spending so much one-on-one time with Catherine (which I loved and we were a great support to each other), my camera always being the other character in the scenes, I really felt like I went to that place with her. We also shot with real refugees in the film, when she goes to a “tent city” it was the real deal and it’s really eye-opening seeing what these people have to go through in order to survive and take care of their families. It was an life-changing experience but it was very intense and emotional.

Filmmaker: You are also a mom (Instagram confirms that your kids are ADORABLE, btw). Tell me about juggling motherhood and being a d.p.

Morano: Being a mom and a d.p. is representational of two things you should know about me. I don’t think things through a lot before I jump into them, I just jump! And I don’t want to miss out on anything, not an exciting career that I love and not having the absolute greatest joy in life which is creating another person and having them with you forever. I just want to experience as much as possible. Being a mom and a d.p. is not easy, but it’s certainly not impossible. You have to have the right partner who has similar goals as you and understands your work, which my husband does, being a gaffer who also owns a lighting and grip company. Without his support, it would be a lot harder, if not impossible. You have to realize, as well, that you will not be there for every moment of your child’s life – maybe not all their firsts, so it’s balancing the time you work with the time you’re at home being a mom. I try to take a break if I can in between jobs so I can spend a solid month at home, just dedicating my time to my kids. For the HBO series I just shot (Looking), it was the ultimate test, we were shooting in San Francisco and my oldest son had to start kindergarten in New York. I had to be away from my kids for two months. It was the longest I’ve ever been away, but we got through it and they did not forget their mom. We’re making up for the lost time now. I may have missed his first day of school, but in the end, he won’t remember that, only I will.

Morano: I have to say that there may have been a couple jobs where being female worked against me. But to be honest, it has helped way more than it impeded my career. There are so many talented, skilled d.p.s out there and a larger portion of them are men. The best way for me to stand out from the crowd is by being a little different. I’m a woman and because people think that’s a rarity and an accomplishment in such a male-dominated field, I actually think my gender gives me more of an advantage.

Morano: They just need to do it and persevere. Perseverance is the key. Also, more women need to WANT to make movies. I think we as a gender need to stop worrying about the unfortunate statistics and start worrying a lot more about finding the best, most original stories to tell. That’s what we need to succeed.

Morano: I don’t really wish I directed a big blockbuster. I would have liked to direct a film like There Will Be Blood or Requiem for a Dream.

Filmmaker: Is your goal to d.p. big-budget films or do you prefer the indie world?

Morano: My goal is the shoot the most unique stories and to go on the most interesting adventures that challenge me like I haven’t been challenged before. The budget is secondary.

Morano: I’m prepping a couple of features for 2014 including a personal project, a feature entitled Meadowland.

Filmmaker: What is a question I should have asked but didn’t that you think is relevant to your two films?

Morano: “How did the shooting style differ in the two films and why?”

Compositionally the look of The Skeleton Twins was loosely inspired by Punch Drunk Love. In terms of camera movement, Craig and I wanted the film to have an elegant, almost classic kind feeling, so we stuck to mainly sticks and dolly shots and only had a couple handheld moments. We didn’t want it to get stagnant, so I tried to do some interesting things with the lighting, keeping it dramatic and doing some unexpected compositions.

In War Story, the director, Mark, and I really wanted to make the audience feel like they were going through this experience with the main character, so we made the choice to shoot vérité but do each whole scene in one shot (a oner). Obviously it’s hard to make that work for every scene, so what I would do is vary each take enough so that they could cut into for coverage. In the end, the film was edited in such a way that it’s about 80% oners, which I was really excited about. That’s a testament to Catherine and the other actors as well as my focus puller, Kevin Akers, and the rest of the crew.