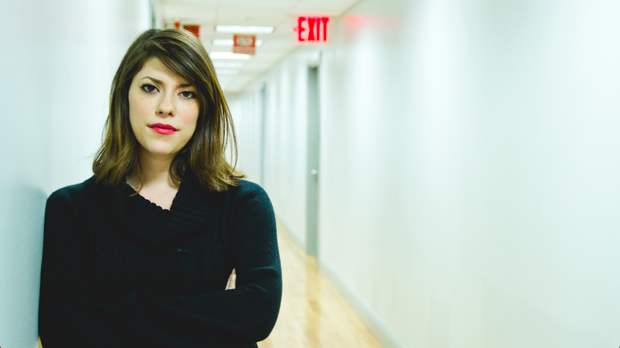 by Danielle Lurie
in Interviews, Sundance, Sundance Features
on Jan 22, 2014

Katie Stern is that inexplicable combination of inviting, accessible, and tough as nails. When I went to photograph her at the color correction of the film she produced, Listen Up Philip, she was wearing all black, despite my suggesting filmmakers wear a splash of color. “It’s just what I’m used to wearing,” she says, a true New Yorker. “But I did wear lipstick – and that’s not normal for me.”

In the color correction suite, Stern was the only woman in a small sea of men, including the film’s director, Alex Ross Perry. The film was on the big screen, drenched in 16mm authenticity. “Your film looks great,” I told Perry. “It’s thanks to Katie,” he said. “She made it happen.”

Ours was the first photo shoot Stern had ever done for a magazine, and I’m certain it won’t be the last. As a writer and director herself, her capacity to understand all sides of the filmmaking process is what I am sure leads her to be the affable yet totally assured producer she has become and will continue to be.

Stern: When I first read the script, I laughed out loud and cried. The writing was so unique and beautiful, and it evoked both emotions equally. I think the best movies strike that balance, and this script did just that. I knew that Alex had an exact and uncompromising vision of what it would be, and that was really exciting. Plus, as a lifelong New Yorker, I had never actually made a movie in the city, and this was finally a New York story I could really relate to.

Stern: Going into any project, you hire the best people for the job, regardless of gender. Our crew was almost exactly 50/50 men and women, and that is very much a unique experience. In fact, this was the most gender-balanced feature I’ve ever been on. So, it is definitely something that I keep in the back of my mind.

Stern: Super 16mm film. This is not a movie of today; there are no phones, computers, or other featured pieces of technology. Presenting this world meant allowing the actual production of the film to mirror the ethos and philosophy of the content. So, shooting on film was really the only choice.

Filmmaker: Do you think this film would have been handled differently without a female creative voice (yours)? How did your being a female producer effect how this film got made do you think?

Stern: The most important thing is to support the filmmaker – male or female – and help make a great movie. Alex and I had a very instant and natural rapport, and we knew right away that we wanted to work together. My co-producers, Joshua Blum, Toby Halbrooks, James M. Johnston and David Lowery each contributed something special to the project, and it was a true pleasure working among them. In this film, the story is told from both a man and a woman’s perspective, so I do think it’s important and necessary to have a balanced creative team. Otherwise, you’re only hearing half the story.

Filmmaker: Who do you hope is your audience? Men or women? Both?

Stern: It is my hope that the film presents an equally realistic, occasionally unpleasant view of the shortcomings and problems unique to both men and women. Audiences deserve a wide range of perspectives.

Stern: I’m not sure it qualifies as a “big blockbuster,” but I thought Spring Breakers was completely brilliant.

Stern: I’m currently writing my own New York movie, a claustrophobic story about a woman’s unraveling, and looking for my next project to produce.

Filmmaker: Considering this article will be released at Sundance, what do you hope to gain from being at the festival?

Stern: This is our world premiere and the first opportunity to screen the film for a large audience. Mostly, I look forward to seeing how viewers respond. I hope people react to the film the same way I reacted to the script and come away caring about the characters. For better or worse.