“The Minute You Walk Out the Door You’re Risking Something”: Philip Seymour Hoffman on the Challenge of Acting 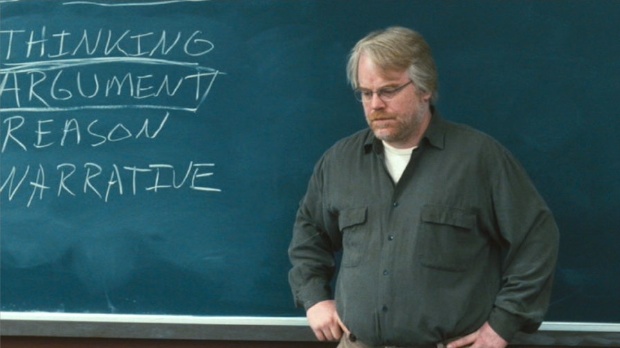 Philip Seymour Hoffman in The Savages

In a free-flowing interview with June Stein in the Spring, 2008 issue of BOMB Magazine, Philip Seymour Hoffman discusses the insights into acting he gleaned from his experience as a director. Early on there is the following remarkable exchange, in which Hoffman says that acting is not about embracing one’s first instincts:

PSH: They’re not making decisions based on the risk-taking that life asks for every time you wake up in the morning. The minute you walk out the door you’re risking something. It’s like—

JS: What is it that Keats said about making friends with uncertainty?

PSH: Anyway, eventually something will settle in or the actor will find something out in the moment and they’ll go, That’s why I didn’t want to explore that, because this is where it gets real uncomfortable.

JS: Don’t you have some remarkable stories around that issue? Because of course that’s where they make the breakthrough, the resistance finally falls apart and everything comes alive and—

PSH: And then they’ll try to make that comfortable. (laughter)

PSH: I think that the more talented people are, the more clever that they become about trying to map the story in such a way that they don’t actually have to experience it. They know the little price that will be paid each night they have to do it.

A common observation in the many tributes yesterday and today to this fine American actor, who died Sunday in Manhattan of a suspected drug overdose, was Hoffman’s talent for and attraction to roles that captured extreme emotional vulnerability. He was expert at evoking both a sense of outsiderness as well as the daily struggle of the Every Man. When there was heroism, it was found in the smallest of moments — in the grace notes. When there was grandiosity, it was never displayed without fault lines also clearly visible.

Because of his attraction to such roles, Hoffman, more than most other “stars,” did his best work in independent film as well as in theater. And when essaying his finest performances — The Master, Doubt, Boogie Nights, Capote, The Savages, among them — it’s remarkable to note the high level of craft, personal dedication and gravitas he lent to a director-driven cinema. His total commitment to the art, and to the portrayals enabled by independent filmmaking, are captured in this anecdote from David Edelstein at Vulture:

Eight years ago, I ate lunch with Hoffman in the East Village for a New York Times profile and had a small inkling of his demons. Capote had just come out and he was the favorite to win an Oscar. (He did.) He talked about what it had taken for a man with a big head, big body, and big deep voice to embody a man with a small head, small body, and bizarre baby voice — about the training that wasn’t unlike what he’d done as a high school jock (yes, he was a jock!), pushing his body and voice to places he wasn’t even sure were in reach. And then he talked about the editing fights he’d had with his old friend, the first-time director, Bennett Miller.

When you hear about cutting-room fights, it almost always means the star thinks he or she is coming off as too unlikable and wants the director to ratchet up the vulnerability quotient. But Hoffman was arguing to make Capote less attractive — to make him, in fact, thoroughly reprehensible. He said he told Miller, “The way toward empathy is actually to be as hard as possible on this character.”

I said I had no idea what he was talking about.

“I think deep down inside, people understand how flawed they are,” he said. “I think the more benign you make somebody, the less truthful it is.”

In the same article, Hoffman is recalled discussing his role in Tamara Jenkins’ The Savages:

“He’s probably one of the characters closer to me than most,” Hoffman said.

“Well, everyone’s life is grotesque if you look close enough. I don’t shy away from that side.”

And here is Hoffman talking on that film’s publicity tour about the need to be fascinated by a role: