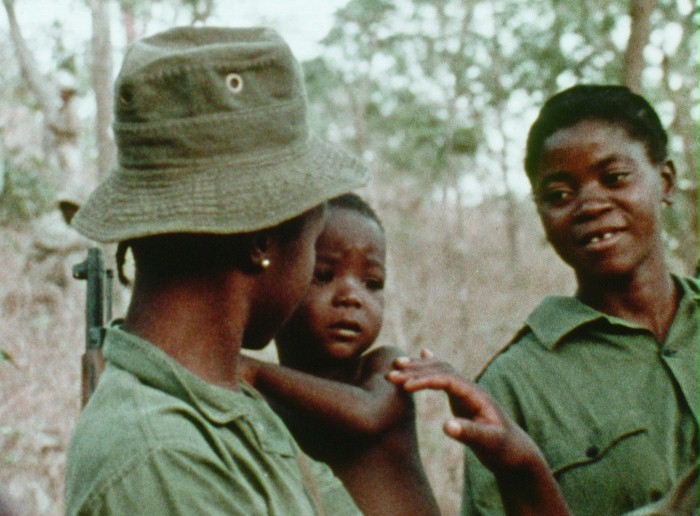 by Ashley Clark
in Directors, Festivals & Events, Interviews
on Feb 11, 2014

After years as a multihyphenate creator of a raft of documentaries (one of which is titled, wonderfully, Fuck You, Fuck You Very Much [1998]), Sweden’s Göran Hugo Olsson has recently come to greater prominence. His documentary on soul singer Billy Paul, Am I Black Enough For You, secured international distribution in 2009, while 2011’s vibrant archive collage The Black Power Mixtape 1967-1975 took him to another level.

Olsson’s new film, like its predecessor, screens in the Panorama Documentary strand of the Berlinale. Concerning Violence is based on Frantz Fanon’s famous 1961 book, The Wretched of the Earth, and focuses, in nine discrete chapters, upon the uprisings that led to Africa’s eventual decolonization. Once again, Olsson plunges into the archives, using frequently astonishing material filmed in Africa by Swedish documentary filmmakers and TV journalists between 1966 and 1987. My friend and colleague Brandon Harris has written about the film in more detail as part of this magazine’s Sundance 2014 coverage, and I can only echo his enthusiasm. It’s a ferocious, consistently stimulating work rife with contemporary geopolitical relevance.

I was on hand to capture the highlights of Olsson’s post-screening Q&A session. (P.S. It’s worth mentioning that in a neat dovetailing of canny marketing and pedagogical altruism, Olsson and his team gave out handouts of the full text used by Fanon in the film, plus the text of the film’s diegetic preface, given by academic and cultural theorist Gayatri Chakravorty Spivak.)

On opting to plunge into the archive
“The film started off when I read the text. I was blown away by how relevant it was today. I wanted to do a film that was taking a non-fiction book of utter importance and bring it into film, but keep the literature in it. The graphics and the voice came before. Very long into the process we were thinking about contemporary images, and that could have been stuff we shot ourselves, or stuff we could buy from the contemporary archive. Also we thought about doing animation or illustration around this [theme]. Archive came late to us, and I wanted to the film to have a timeless feel to it. You can see the oil rigs, the weapons, the machinery, the people. You see that it’s dated, but it’s not so far away. We wanted people to draw their own conclusions from it and not make it about today, in Somalia, or Pakistan, or Palestine.

On the film’s visual influences
“We had a lot of influences – Francis Ford Coppola’s Apocalypse Now (1979) is in there. The use of graphics in Jean-Luc Godard’s films. The Prince video for ‘Sign o’ The Times’ (1987 – incidentally the same year as the film’s most up-to-date footage) was also important. We worked in many different ways.”

On including footage of Robert Mugabe and the ethics of controversial content
“It is him talking about those issues at that time. Even if you know you have [a particular] idea about him, you can see the dynamics of what happened and you can figure it out. I think it was important. We found it. We thought it was strong. Everybody knows what he’s known for today, and it was important to see that things are not black and white. Things change. That’s why people supported him for so long. Some say he’s evil, but he’s not stupid.”

“It’s important. As with the image of the amputee woman breastfeeding [a particularly upsetting image, used in the film’s seventh chapter, set in 1970s Mozambique]. You have these images [in] your hands, and you say, “Are we going to show it or not?” And then I have to say, well, who am I to decide whether to show it or not? We have it. It will mean something. And then you come up with the classical editorial dilemma that if I take the decision not to show it, it’s then more dangerous than the opposite.”

On the involvement of Lauryn Hill, who narrates Fanon’s text over the images
“We had a lot of ideas to incorporate a lot of contemporary writers of today, to reflect on Fanon’s work, but it didn’t pan out. There’s so much talking and text in the film [already]. We had mutual friends with Lauryn Hill and I heard that she studied Fanon as a teenager. This was in the summer when she was in jail [for tax-related offenses], and I wrote her with a pen and paper and talked about the project and I sent the script to her. She immediately replied and said, ‘I will not only do the voice but I will do the music because I’m at this moment reading Fanon in jail’ – so it was a very strong thing.”

“She couldn’t do the music because she was released in November [2013] so we didn’t have time to do that. But when she hooked onto the project she was so forthcoming. She reads it beautifully. It’s not an easy text – it goes here, there and everywhere and she’s done this excellent work. I love her voice. She brings in her perspective too. The aim is to tell the audience that its not just the 60s and 70s, it’s something more contemporary too.”

On taking the film around the world
“We have a distributor theatrically in seven African countries. We have posters in different languages. We have a system for us that makes it simple to produce different versions of the film in different countries. The entire thing will be in Russian, in Arabic, all the text and all the voiceover. We’re working with existing translations. This is a film for Europeans, or people in America or China or whatever, for us to think about what’s actually going on today.”