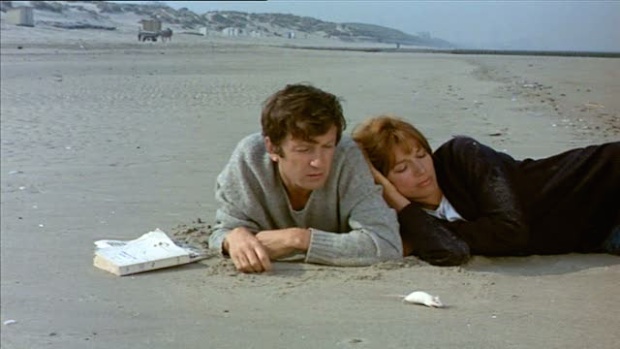 One of cinema’s greats, the French director Alain Resnais, died yesterday, March 1, at the age of 91. The director of such landmark films as Last Year at Marienbad, Hiroshima, Mon Amour, and Night and Fog, he premiered his latest film, Life of Riley, just one month ago at the Berlin Film Festival. In 2000, coinciding with a retrospective organized by both the American Cinematheque and the Film Society of Lincoln Center, Peter Bowen wrote the following short essay, and we collected appreciations from three independent directors — Christopher Munch, Keith Gordon and Radley Metzger. It is reprinted below.

Perhaps more than those of any other modern director, the films of Alain Resnais are synonymous with European art cinema. Hailed as groundbreaking, innovative and intellectual, his films are also lampooned as elliptical, poetic, and populated with impeccably dressed characters adrift in inexplicable existential dilemmas. In truth, Resnais’s legacy – soon to be displayed in a traveling retrospective – remains intact.

Often crowned the theoretician of the French New Wave, Resnais was, in fact, the most schooled in actual film production. While his cohorts — Godard, Truffaut, Rohmer, et al. — were busy raving about their favorite directors for Cahiers du Cinema, Resnais had been working as an actor, editor, screenwriter and assistant director on industrials and occasional features throughout the ’40s and ’50s. And his early films were odd 16mm, black-and-white documentary shorts focusing on art and artists, such as Van Gogh, Guernica and Gauguin.

Rarely revisited, these shorts, Resnais scholar James Monaco suggests, “strangely mirror the features he was later to shoot in the ’60s,” foreshadowing his complex treatment of documentary, time, memory, post-capitalist imperialism and, most importantly, the role of the artist. Throughout his career, the artist — and, by extension art itself — remains a central concern, either in the form of homages (in On Connaît la Chanson to Dennis Potter, in La Vie Est Un Roman to three French filmmakers, Melies, L’Herbier and Rohmer); or as character (in Providence); or in the form of creative collaborations (with poet Jean Cayrol in Night and Fog and Muriel, novelists Maguerite Duras and Alain Robbe-Grillet in Hiroshima, Mon Amour and Last Year in Marienbad, respectively, or cartoonist Jules Feiffer in I Want to Go Home).

While Godard and others attempted to rewrite cinema through the style of Hollywood B-movies, Resnais’s obsession with memory, time and psychological subjectivity continues a French tradition expressed in both the philosophy of Henri Bergson and in the novels of Marcel Proust. In his documentary short Night and Fog Resnais leads a hallucinatory journey into the Nazi Holocaust through use of archival footage and a poetic subject. In his first feature, Hiroshima, Mon Amour, he turned his technique around, using a faux-documentary style to examine the real and ethical aftershocks of the A-bomb’s blast. By the time of Resnais’s 1961 masterpiece, Last Year at Marienbad, history has collapsed into the fashionable relics of the European spa in which his nameless lead characters rewrite the story of their relationship (as well as any expectation of a coherent cinematic syntax) with each new scene.

In the almost 40 years hence, Resnais has continued to challenge our comprehension of film language. And the force of his early innovations led the way for many filmmakers to push their own boundaries and assumptions. To celebrate an upcoming travelling retrospective, we invited several American filmmakers to speak about Resnais and his influence on their own filmmaking practices.

Hiroshima, Mon Amour, which concerns a French actress and her adulterous affair with a Japanese architect while she is in Hiroshima making a film about peace, is among my favorite films because its words and images are so poetic and unforgettable.

In Man and His Symbols, Carl Jung wrote that he had “encountered an extraordinary number of dream reactions” to the film, and this declares something essential about Resnais’s metier as an artist who, like Jacques Rivette and Nicolas Roeg, has sought to free cinema from the linearity with which we often experience time and memory, and grant it permission to do what it does best: express ideas associatively across time, as in a dream. That such a dreamlike work is also so literary is a triumph.

When I first watched the film in my own dream of my early teens, I was struck, as I am today, by Resnais’s masterful handling of essentially static dialogue scenes, in which each composition is absolutely appropriate for its emotional weight, with little movement. The clean modern lines of the hotel where Emmanuelle Riva stays are contrasted not only with the curves of two lovers naked and entwined, but with the twists and turns of two rivers, the Ota and the Loire, and the gnarled plane trees of Nevers, to which Riva’s troubled memory of a German lover returns many times.

An understated score by the always intriguing Giovanni Fusco accompanies some of Marguerite Duras’s most beautiful words:

In some of the accompanying images made at dawn or dusk, the thinness of the negative reminds us that there is almost nothing there, that these pictures have been elegantly fixed in silver as if by alchemy: and herein is revealed, in a small but significant way, the utter inability of the much-touted electronic media ever to record light in just this fashion.

In our present epoch of denatured cinema, when only a producer willing to lose a great deal of money would mount such a production as Hiroshima, Mon Amour, it is worth remembering that there was a time when filmic art was not only avidly practiced by men like Resnais, who were rightly held up as masters, but encouraged by a world audience that had yet to devalue excellence or dismiss the primacy of images to tell a story as a dream.

When Mon Oncle d’Amerique came out in 1980, I was 19 years old, a confirmed movie buff and a wannabe director. I’d seen my share of experimental and surreal films, but there was something about this film that floored me. I ended up going back to see it at least five times in its first New York run, dragging various friends.

What struck such a deep chord in me was the way Resnais used seemingly contradictory elements: distance and emotion; surrealism and naturalistic performances; a real on-camera scientist-narrator explaining human behavior and subtle story lines that transcended this approach to “behavior in a box.” The effect wasn’t just ironic, or moving, or funny, or tragic, or sharp social commentary, but somehow all those things at once. And rather than undercutting the different possible ways of looking at the characters, the mix made each — using the heart, the head, the gut — even more true. The film taught me, as much as any ever has, not to be afraid of letting disparate moods, tones and styles run up against one another — that by deconstructing narrative, by playing with conventional perceptions, there is a chance to do something more than just create an interesting experiment or an anarchist manifesto. There is a chance, by forcing us to look at storytelling in a new way, to get closer to characters, to truths and, ultimately, to our own hearts. I may never be able to do it as well as Resnais — his mixture of boldness and sensitivity was amazing — but I see quiet echoes of this film in everything I’ve done since.

Alain Resnais must be acknowledged as a powerful and lasting influence on filmmakers of the last half of the 20th century.

Although he was technically a product of the French Nouvelle Vague revolution of the 1960s, his style and content set him far apart from contemporaries like Vadim and Godard.

He was the first filmmaker to achieve critical and commercial success with a highly personal combination of realism and memory. Picasso’s Guernica was finally fused with Joris Ivens’s film, The Spanish Earth.

There had been previous hints before (such as Stanley Kubrick’s The Killing), but Alain Resnais’s first feature, Hiroshima, Mon Amour, buried forever the strict linear narrative rule of storytelling. Writers and directors have been drinking from his trough ever since.

His work could not have existed in any other medium: it was pure film.

And if you’ve ever wondered at how truly creative time travel can be, you need only look for the mouse in Je T’Aime, Je T’Aime.

A review of my film Therese and Isabelle once referred to the director as “a pale imitation of Alain Resnais.”

I took that as a compliment.