Nailing the Score of the Art Forger Documentary Art and Craft 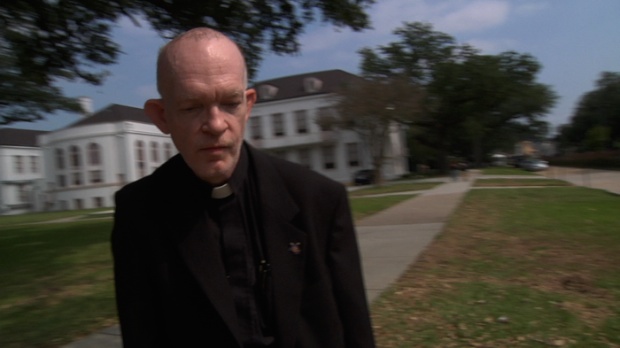 Mark Landis in Art and Craft

by Art and Craft
in Filmmaking, Financing, Post-Production
on Mar 6, 2014

Art and Craft follows prolific art forger Mark Landis just at the moment his elaborate 30-year con is exposed. What follows is a guest blog by filmmakers Sam Cullman, Jennifer Grausman and Mark Becker about a central consideration in making this film. Art and Craft is in the final days of a Kickstarter campaign to raise finishing funds, including monies needed to mix the score they write about here.

When we first read The New York Times story about Mark Landis in 2011, we were immediately intrigued — what kind of art forger donates his work to museums instead of selling it? From the outset we were determined to meet Landis face-to-face and to understand his motivations.

And when we tracked him down in Laurel, MS, we began the three-year journey of telling Landis’ story and unpacking the complicated impulses and influences that brought him to where he is today. We soon won his trust and were given unfettered access, filming him at work as both forger and “philanthropist.”

On our very first shoot, we filmed Landis driving to Hobby Lobby to buy art supplies and ’40s Big Band music filled his red Cadillac as it did throughout the rest of production. We knew immediately that music — and in particular music inspired by this era — would be an integral part of this film.

In the world of vérité documentaries, one’s observations of both image and sound recorded during production often find their full meaning and place when they meet again in the editing process. The score of Art and Craft, initially inspired by observation, eventually transcended its diagetic existence and became a source of narrative meaning.

Landis’ love of old movies and television shows are also a huge part of his life and a great example of this dynamic. The blue light from the television in Landis’ bedroom is always on and casts an omnipresent glow as he paints his copies. Already working within the framework of an art caper narrative, we found inspiration for our score in Landis’ obsession with movies and TV (particularly film noir and others from the 1930s and ’40s) as well as music from that same bygone era.

In his life, Landis is a character in his own personal movie. He thinks of himself as a “philanthropist” when he donates his works to museums. He talks about playing the part, like an actor. “Like those guys on TV.” And this informed our creative choices both in editing and in scoring the film.

Searching through big-band songs, co-director and editor Mark Becker placed Artie Shaw’s classic “Nightmare” as a temp track at the head of the film. We watched Landis walk through a strip mall parking lot and comb through Hobby Lobby looking for frames and painting supplies — an act that without music would play as innocuous and mundane. But “Nightmare” contextualized his endeavor immediately. Here is a Character with a capital C. He’s a man on a mission, and we’re not sure yet whether he’s a hero or villain.

Later on, after we scored this first scene with our composer Stephen Ulrich, Mark suggested squashing the EQ of this opening track in order to make the cue sound iconic — like it came from an period film noir with the production values of older microphones and recording equipment. The score becomes a meta-score, with the subtle connotation that this music was not written for Landis but this is the music of Landis. This cue and its several reprises throughout the film became the sound of Landis’ alter-ego, “The Philanthropist.”

Before we began working with Stephen, Mark chose temp music to carry us through the more intimate scenes with Landis. Sticking with the jazz sensibility, we relied heavily on music from ’20s and ’30s jazz guitarist Eddie Lang. Lang had a somewhat buttoned-up classical sensibility. But there is a rough-around-the-edges quality to the music as well. The sound felt right for the dignified, yet slightly ragged persona of our main subject.

Among Lang’s cues was a guitar-based interpretation of Rachmaninoff’s “Prelude in C-Sharp Minor.” For Landis’ more intimate scenes, during our pre-composer phase, Lang’s guitar (and “Prelude” especially) became the perfect soundtrack for Landis’ interior life. It’s a solitary sound, but unsentimental and full of resolve and strength. Landis is coping with his mental illness, and dealing with loneliness, but he is not a victim: his forgeries and his “philanthropy,” though ethically questionable, are both part of a quest for purpose in life.

All of the Eddie Lang tracks were eventually replaced by Stephen’s fine work. And Stephen brought inspiration, cohesion, and nuance to Art and Craft’s score in a way that needle drop songs never could. But there was one exception where we stubbornly stuck with the melody, the sound of our temp music. We worked with Stephen to re-create Eddie Lang’s “Prelude in C-Sharp Minor.” And thus Stephen adapted the Eddie Lang arrangement of a Rachmaninoff piece.

Here we entered into the world of appropriation.

After all, this is a film about a copy artist.