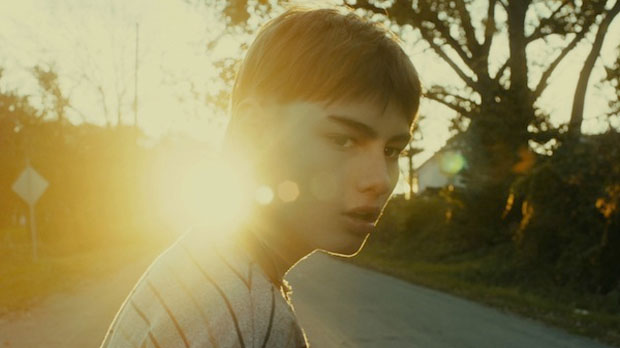 by Kevin Canfield
in Directors, Interviews
on Mar 14, 2014

In The Cold Lands, Tom Gilroy’s intelligent and evocative new film, a resourceful teen is left to contend with a set of existential questions after he leaves home and tries to tough it out in the woods. Atticus (Silas Yelich) and his mother Nicole (Lili Taylor) live an ascetic lifestyle—though he’s interested in hip-hop and video games, Nicole’s doing her best to keep pop culture and materialistic influences at bay. Together, they roam around Upstate New York in a Subaru station wagon, looking for salvageable items left by the roadside and taking long walks during which they explore the rich history of their small town. Hers is a very 19th-century sort of self-reliance—a vein of which Atticus taps into when tragedy upends everything he’s come to count on.

Gorgeously shot by Wyatt Garfield and skillfully acted by Taylor, Yelich and Peter Scanavino—he plays an amiable, if somewhat confused 20-something who lends Atticus a hand—the film is both a paean to principled outsiderdom and a nimble character study. The Cold Lands is writer-director Gilroy’s second feature (Ned Beatty, Liev Schreiber and Campbell Scott starred in his 1999 film Spring Forward). He’s also written extensively for the stage, acted in dozens of films and TV shows and made videos with R.E.M. and other alt-rock notables. In advance of the film’s March 14 opening at the IFC Center, I met up Gilroy at Cinereach, his New York City-based production company.

Filmmaker: The film takes place in the current day, but there are subtle and overt references to some of the writers and revolutionaries who found inspiration in 19th century America. How did these themes influence the story?

Gilroy: The Transcendentalists, Thoreau and Walden—it’s a deep part of American culture that often is forgotten in lieu of things like guys running around with guns and shooting the British. But there was also a peaceful, spiritual, enigmatic, mysterious, shamanistic aspect to American culture—throughout Whitman, the Hudson Valley painters, even up through Georgia O’Keefe and Walker Evans. That kind of thing is as American as people grabbing their guns, and that was important to me.

Gilroy: The big, big difference is that 90 percent of what you do in theater is dialogue-based. I love dialogue, and I love all the great dialogue writers, like Mamet, Arthur Miller, Pinter. Obviously, in film you can huge expanses of silence, and gestures and close-ups. The thing that I want to do is take the construction and the mechanics of cinema and apply it to the small moments that are often explored in theater. In terms of deciding what is what, when these ideas begin to formulate, the story itself kind of says: I’m a short story. Or: I’m a theater piece. Or: I’m a short film. I try to let the piece itself speak to me and say: I’m a film.

Filmmaker: There are some beautiful shots in the movie. A meadow melts into a tree line, a crescent moon hangs in a twilit sky. You mentioned the Hudson River School painters. In terms of landscape shot compositions, how did they influence the look of film?

Gilroy: It’s heavily, heavily influenced by that. I had to study that when I was in high school, and as a person who’s an atheist yet is a big believer in human spirituality, I found the Hudson River School and the Transcendentalists to be fascinating, because you could have it both ways. When I sat down with (producer) Paul (S. Mezey) and Wyatt (Garfield), the cinematographer, I said absolutely from the very beginning that this was going to be based on a lot of very specific paintings. That was all deliberate.

There’s a painting called “Kindred Spirits” (by Asher Brown Durand). It’s two settlers on a small cliff. They’re tiny in the frame. And you just see woods and forest and mountains. The painter means: We came here to conquer this. But if you look at it from a more nature-loving point-of-view, we’re just one piece of all this. That had a massive influence on me as a kid, and it was one of the things I showed Wyatt when we were doing the storyboards and figuring out the visuals for the movie.

Filmmaker: How did you cast the film? You have Lili Taylor, who has loads of experience, and Silas Yelich, who had none.

Gilroy: Lili basically just stuck herself in the movie when I was writing it. We’ve been friends for such a long time; she’s like a sister to me. I began to talk to her over the next year about the story, and she had a very deliberate hand in how the character was designed.

And for Silas—I looked around a lot. I didn’t want a theater kid, I didn’t want a New York kid, I didn’t want a professional kid. I looked at a lot of kids up there (in Rensselaerville) in theater programs, and none of them were right. A friend’s kid was in a church basement production, and she said, “There’s a kid you should come see.” Silas’ sister had a big part, he had a small part. I just sat in the rehearsals and watched Silas, and he had this way of creating this world unto himself. I talked to his father, and then Silas and I began to meet every two weeks for about two-and-a-half hours. I taught him what makes a good scene, how an actor approaches a scene—you have an objective, you have a need. He was open and so raw and so intelligent, and yet it was inside this morose, flippant, terse boy, which is perfect for somebody who’s that age.

And then Michael Stipe approached me and said, “Can you do a film for us?” They knew they were breaking up and they asked artists to do films. I said, “How about if I do one with this kid?” I think it would be a nice dry run, to see if we can make a movie out of my house. Silas had a great time, R.E.M. was really happy with the piece, so we just continued to develop the film.

Filmmaker: Though it’s a very specific sort of character study, the movie takes on a lot of big ideas—the role of technology and pop culture in our lives, the gulf between the 1 percent and the 99 percent. How did these themes emerge as you were making the film?

Gilroy: I think after a while you become imbued with the things that interest you and you know about. I don’t think I have the ability to write a scene that was, say, racist or homophobic. Because of all the reading and experience that I’ve had in my life, I’m not that kind of person. The same is true of politics and culture in general. Just like I wouldn’t make a movie that was racist or homophobic or sexist, I don’t think I’m capable of making a movie that doesn’t have some awareness of the culture around me—whether it’s the 99 percent and the 1 percent, or the crumbling social-services system, or this idea that we have to pull away from society. All of that stuff is part of just being awake as a writer.

For five more questions with Tom Gilroy about The Cold Lands, click here.