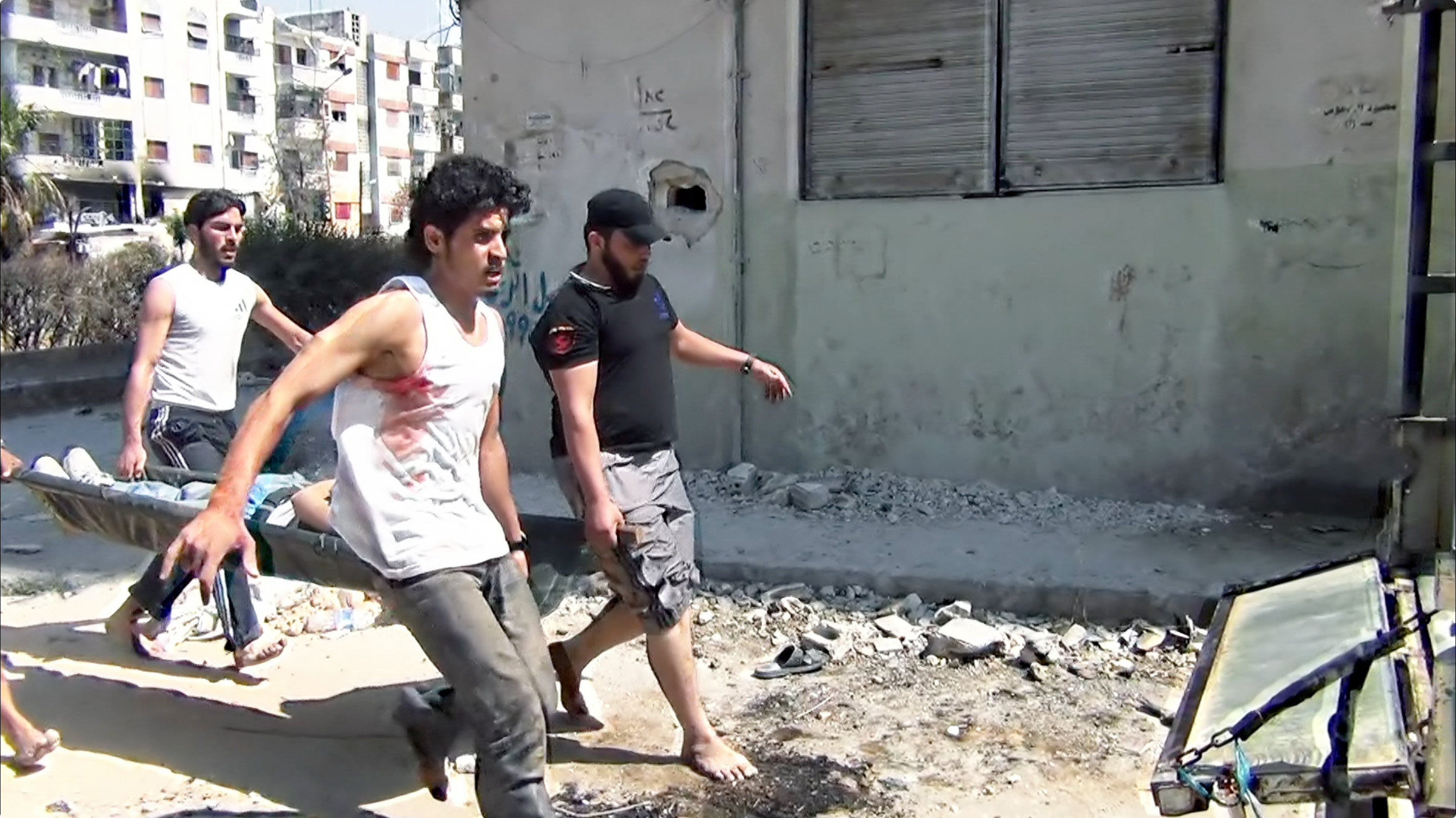 Coincidence or zeitgeist? Three of the four outstanding films in the second, slightly shorter segment of ND/NF feature swarthy, sensuously handsome male protagonists who live and act out their dramas in sweltering countries with edges that kiss the cool yet uncomforting Mediterranean. And no, this is neither a projection nor an implication of selectors.

Violence, be it palpable or discreetly off-screen, is a powerful element in all four. New Directors ends March 30; Part I of this review appeared last week.

Four of 10 viewed (I missed centerpiece Obvious Child and closing nighter 20,000 Days on Earth)? A respectable proportion, indeed. In addition, two or three others in the lineup could easily be given a big thumbs up by another reviewer, but as much as I respect the filmmakers’ intentions, the methods and/or points of view do not ring my subjective bells.

What I love about this festival is that it is highly curated by six knowledgeable and highly, no, severely opinionated colleagues from MOMA and the Film Society. The selection is not diluted with dumped product, the way more market-oriented New York festivals sometimes are in the frantic hustle for distribution. Watching eclectic New Directors pictures in close succession requires a shift, probably unconscious, of visual, aural, affective, and psychological gears. Like an extra on a new dvd, a frisson is business as usual.

In no particular order, the following are my recommendations:

Nobody could doubt that this hurriedly-made Syrian film, though proudly partisan, is an accurate documentation of damage suffered by rebel forces in one urban area; Syrian director Derki vocally records time and place before each scene. (He is also a d.p., along with media activist Ossama al Homsi, Kahtan Hassoun, and, early on, Orwa Nyrabia.) After all, the intention of a courageous and energetic group of civilian special force-types in the audacious city of Homs is to unmask Bashar al-Assad’s propaganda machine and ask for help. With the aid of social media, they reason, how could the world not intervene? We know the answer, but the film does not elaborate on one of the principal reasons it did not respond: No one proposed a viable alternative, raising the fear of perhaps an impending fundamentalist Muslim theocracy.

At the beginning of the shoot in 2011, demonstrators rally more or less freely outdoors. Within a year, the counterinsurgency has revved up, snipers have emptied the streets, and the band of brothers has become largely diminished by death (many corpses made visible), injury, and enervation. Most of the buildings in the area where they are holed up are destroyed. The fighters walk only inside adjacent hollow shells and fire rifles through holes they have punctured in thick exterior walls that still stand.

The title is tinged with irony. After battling against nearly impossible odds, a tiny contingent escapes from the city by digging a tunnel under a street and then crawling through sewers. Feeling marginalized, the goal becomes a reappearance in their front-line prison. All the way through the film, Terki and al-Homsi especially have unsurpassed access, as dangerous as it is intimate.

At the start of production, Terki daringly selects as a focus of audience identification a charismatic looker with piercing eyes and thick raven hair, Abdul Basset Saroot, aka Basset (top photo, foreground), a fast-moving, quick-thinking natural leader. A former blacksmith barely out of his teens, he is already a celebrity: a goalkeeper on the national youth soccer team named second best goalkeeper in all of Asia, and an idolized singer of revolutionary songs to throngs who gather in the streets just to see and hear him.

Terki’s instincts serve him well—up to a point. Basset and the camera enjoy a mutual love affair; a hint of narcissism (he is a performer, after all) is channeled in a positive direction. Even after two injuries that would send most career soldiers into retirement, he bravely continues the good fight. The downside is that this magnetic eye candy becomes less and less interested in political victory and more and more enamored with the egocentric goal of martyrdom. 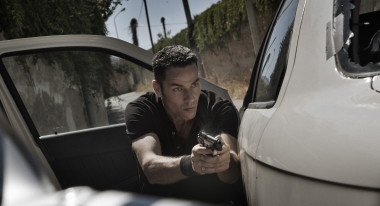 Like other recent Italian films of the genre, this gangster picture breaks the mold. Here the boy-girl romance wins out over the Mafia story. Grassadonia and Piazza juggle the genre’s conventions as well.

The narrative is spare — think Melville’s Le Samurai. Salvo (Saleh Bakri, of the great Palestinian acting family) is a stone- and chisel-faced Mafia hitman with Frank Sinatra eyes and a body of pure muscle. A model of stoicism, he says little — think Delon — and, unless called for a job, is content to lie around in his rented room in a sad Palermo home. He is difficult to read, although when he insists that the family’s large dog stay with him and that they bathe him, we understand that he has emotional needs lurking deep down.

What he has in spades is loyalty. He is as obedient as his new pet. These traits come in handy when treacherous fellow gang members fire clumsily at the boss, Randisi (Mario Pupella), whom Salvo is driving. Here he is pure action figure until he discovers the name of the mastermind behind the operation. He dashes to the beach house the hapless man shares with his sensuous blind sister, Rita (Sara Seraiocco), who, as the other mobsters seem to know, is not so sightless that she can not make out colors and shapes.

The film screeches to a halt. D.P. Daniele Cipri uses a Steadicam brilliantly for a languorous 20-minute survey of the premises from Salvo’s POV as he tiptoes through the place, its shutters providing noirish shadows, accompanied by Guillaume Sciama’s haunting sound design. Having patiently awaited his prey, he does his business, then kidnaps instead of eliminating the almost bestial, highly expressive Rita, an obvious opposites-attract object of desire.

In the abandoned Mafia-favored cement facility outside of town where Salvo holds her hostage, the two play a game of cat and mouse until she caves. It is unclear to me, but Salvo (I save in Italian) possibly restores her sight fully through the biblical laying on of hands. Mafia policy does not allow potential witnesses to remain alive. After the expected showdown with Randisi and his henchmen, Grassadonia and Piazza strike gold with an unpredictable and highly original third act. 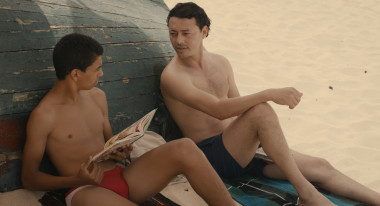 In the first part of Taia’s adaptation of his autobiography, 15-year-old Abdellah (Said Mrini) has a mad crush on his apparently oblivious older brother, Slimane (Amine Ennaji). He even sniffs his underwear and his bedsheets. On occasion he has sex with more senior men at a construction site. The pull toward Slimane is more than sexual: He is the only male role model for the teen, who is lost in the shuffle of an overwhelmingly female household. His father? A wife beater.

The film jumps 10 years, by which time Abdellah (now the seductive, slightly androgynous Karim Ait M’hand) has just relocated to Geneva, ostensibly to begin studies at the university but penniless; hence the bed-providing charity of the title. The one constant in what has probably been a turbulent life is his attraction to older guys. I write probably because Taia requires you to fill in the ellipsis, and you can only surmise that he has hustled and committed violent acts, only because they are hinted at in the last sequence before the leap in time. By the way, any sex and violence in the film takes place off-screen.

Taia uses shorter ellipses throughout the film, or maybe some are just fades to black with an unquantifiable temporal alteration. On either side of these shots are magnificent colorful scenes, especially those in Morocco, by d.p. Agnes Godard. Abdellah’s working-class family lives in a stucco house with traditional multi-colored tiles, which she enlivens when Abdellah and his sisters play or do domestic chores on the patio.

Young Abdellah reads constantly, although Taia does not make a big point of it. Like a closeted youth anywhere, he is unusually self-conscious, but manages to project some joie de vivre. In contrast, his grown-up self is an expressionless mannequin, as cold as ice. When he runs into his ex-lover, an older Swiss professor we saw him with when he was still a teen in Morocco, he refuses to acknowledge that there had been anything honest about their relationship, demeaning himself in the process in order to maintain his blank mask. Can anything or anyone pierce it? Let’s just say Taia honors the titular organization for its part in a modicum of personal evolution. 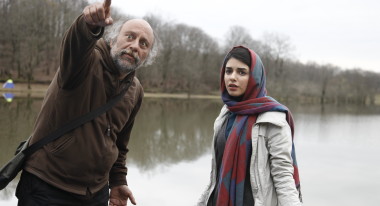 The setting — a university-owned campground on a placid lake during the daylight hours before an annual student kite-flying competition — provides a specific time and location for Mokri’s sublime, 134-minute, single-take ensemble piece. Not one cut!

D.P. Mahmoud Kalari follows educated young people from the city who know one another and speak about trivia or make what they call kite talk outside their tents (be warned: this banal chitchat takes up a lot of film time); the urbanites speaking reticently to one of two creepy,local restaurateurs right out of Deliverance (Babak Karimi, Saeed Ebrahimifar), who signify foreboding with every sentence and movement; and the two fearsome fellows by themselves, talking admiringly about the visitors’ flesh, hardly in a sexual way, or sharing morbid subjects. Written text at the beginning has already told us of rumors about a rural eatery that serves human meat.

Formally, the single take enables Kalari to reverse course at any time — atypical of one-take productions — or shift 90 degrees in this meticulously choreographed enterprise (he rehearsed theater actors for a month). He shoots repetitions of encounters we have already witnessed, the same characters articulating the same dialogue, sometimes from the same angle as before, sometimes from another. As you might expect, the narrative is not linear.

Toward the end, a third local, the elderly Hamid (Khosrow Shahrad), enters from outside the rundown restaurant, which he runs with the other two. His screen time is short, and he talks with only one of the campers, a beautiful, soft-spoken woman whom we have encountered earlier. The meet, however, takes on tremendous narrative significance, which I will not elaborate upon. Suffice it to say that I believe a case can be made for the film to be categorized as non-fiction within a fiction or fiction within a fiction. Here’s my backup: Make your choice.

Fiction within a fiction: stories within stories, first-person voiceovers spoken in the third person, appearances out of nowhere by non-diegetic entertainers, the masterful use of such conventions of the suspense genre as visual maguffins, narrative red herrings, loud non-diegetic bird and animal sounds, and brief, nervous percussive and violin fragments.

Non-fiction within a fiction: documentary feel, bits of evidence that back up  earlier suppositions, odd folks who are merely eccentric, not dramatically exaggerated or otherworldy.