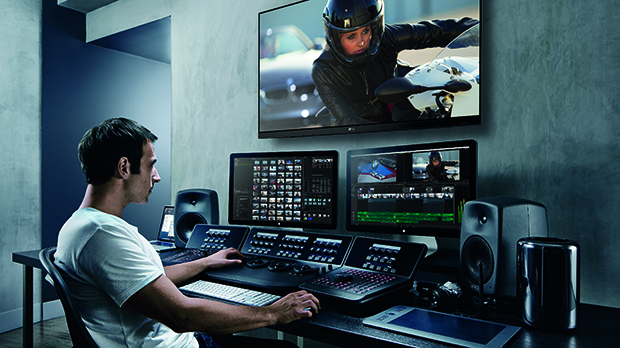 by Joey Daoud
in Filmmaking, Post-Production
on Apr 10, 2014

Besides the new URSA and Studio camera announcements, Blackmagic announced some new updates to their popular coloring software DaVinci Resolve. While the newest version boasts over 100 new features, the vast majority of them are improvements to the editing capabilities. In previous versions the editing area of Resolve was more for making tweaks to an ingested timeline to correct any errors or drop in footage that didn’t import properly. Now it’s aiming to be a full fledged editor.

The latest version adds a bunch of features you’d find in most NLEs – lots of timeline trimming options and keyboard controls, transitions, effects, and robust text editing. A really interesting feature is Collaborative Editing. An editor and up to two colorists can be working on a shared project simultaneously. All they need is the source material on a local drive.

On the Ingest side Resolve now has Cloning, a feature that copies files and media cards to single or multiple directories for ingest or backup – best of all with checksum file verification.

These new features are looking to make Resolve a part of the entire post-production workflow, from the moment the camera stops rolling, not just a color suite after picture lock. Will this become a new major NLE? Not sure. I doubt any established editors are going to jump ship for essentially something that is a version 1, maybe 2, of an editing system.

But if you look at it for students and entry editors, Resolve has the free Lite version that will include all the new editing tools (though not Collaborative Editing). This could get a new batch of editors hooked on the program and it’ll only mature over time, now that it’s clear this is a direction Blackmagic is going in.

Everyone flipped out when FCPX came out and now it’s one of the most common NLEs I see displayed at NAB booths for demos and supported from most plugins. In a few years Resolve could be on that list.

Resolve 11 will be available in June as a free upgrade to current users. For new purchases the software is $995 or free for the Lite version.