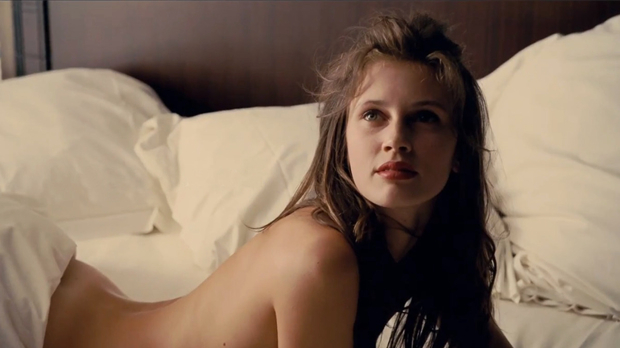 by Brandon Harris
in Directors, Interviews
on Apr 25, 2014

A young, remarkably fetching woman sunbathes on a topless beach at the very beginning of Young and Beautiful, François Ozon’s latest feature film. Her younger brother — on vacation with her, their stepfather and remarkably clueless mother — watches her from afar with a pair of binoculars. A tone of youthful sexual indiscretion is already in play before we properly meet Isabelle (Marine Vacth), the girl on the beach, who can’t be much older than 17 and is looking for concrete sexual experience as soon as she can find it. She’ll first find such experience with a furtive German she meets on the vacation and later as an internet prostitute, arranging encounters with middle-aged men through the information superhighway. She lies about her age and looks awkward in revealing clothing stolen from her mother as she gallivants around Paris, making her sexual rounds when not at high school.

The very prolific Mr. Ozon (at age 46 this is his 15th feature film) hints in the direction of Last Tango in Paris and Belle Du Jour, but he’s made a feminine coming-of-sexual-age film quite unlike any other. He doesn’t undermine the comic and tragic potential of his story, but also refuses to cast moral judgement on Isabelle or her various clients. When one of them dies mid-coitus, the consequences of Isabelle’s action are taken seriously by a narrative whose stakes suddenly grow large and dangerous. Psychology and sociological inquiry are kept at a minimum by Ozon, who presents the goings on with a aestheticized flatness that shouldn’t be confused for a lack of engagement. Joining a legacy of French cinema that showcases the world’s oldest profession in contexts it isn’t normally found in (i.e. middle-class existence), the movie is a significant triumph for its uneven director.

Filmmaker: How did your interest in this subject matter germinate?

Ozon: I wanted to make a film about the sexuality of young people today. I had the feeling it’s very different from my generation. People of today have the opportunity to be very early in their life connected to sexual images with the internet, with all the things you can see on the internet, with all these images. I wanted to explore the sexuality of a young girl today, the fact she doesn’t realize how it can be dangerous, and how she has no fear or complex about her sexuality.

Filmmaker: How did you find your way into imagining what her world was like and her mental and emotional space? Did you do any research in terms of talking to women who had been prostitutes or the like?

Ozon: I read many articles about all these girls who do prostitution. I realized many of these girls do that because of money, because they have to study, they have economic problems. And the idea of my film was the fact this girl is rich. She’s clever, she comes from a very open-minded family and the idea was to develop this character who has the first [appearance] of having no problems. It’s not obvious that she needs to do prostitution because she has a psychological problem or economic problem. It was more interesting for me to try to understand why sometimes some girls do that for other reasons, for personal research.

Filmmaker: It seems to be almost a trope in a certain kind of European cinema that the bored bourgeois, if you will—

Ozon: You know I didn’t want to make a general film about young people. It’s the case of this special girl. The problem of people who see the film and they think it’s my vision of the sexuality of young people: no, it’s just the case of this girl, it’s a special case. I don’t think all the girls are like this or have this kind of sexuality.

Filmmaker: How did you find this young actress? Did you write the film for her?

Ozon: No, I did the script, I read the first version and I began the process of casting because it was important to find the right girl for the part. When I met Marine, I was sure she would be perfect for the film. The fact she was very mysterious in life was interesting for me, because I wanted to have a character who is a blank page on which you can put many fantasies, many reasons, many observations, who has this magical face on which you can project many things.

Brandon: So it was important for you that she was sort of a model, and not just in the Bressonian sense of the word?

Ozon: The fact she was model was very good for the sex scenes, because she has no complexes, she had such a beautiful body. Sometimes it’s easier for sex scenes to work with models because they’re used to working with their bodies. But the fact she was a model was not important. What was important was to have a girl who has a beauty which is disturbing. She’s too much, she’s too beautiful in a certain way. A little bit like Catherine Deneuve in Belle de Jour, you know, this woman was too beautiful and just seemed very cold. You can imagine many things on her sexuality.

Filmmaker: How did you go about explaining the role to her?

Ozon: I said the truth. When I work with actors I’m very honest. I said, “I don’t know exactly why she does that, but she needs to do it, and we’ll try to find out together during the film why she does this.” The script is the facts, after it’s up to us to find reasons, to find the right direction for the character. I think Marine is a very clever girl, very mature for her age, and she had no problem with the fact there were not obvious reasons in the script explaining Isabelle. It was important. She wanted to discern the character and try to understand her.

Filmmaker: Did certain things occur to you in terms of what the story meant that you were not aware of when you were writing or preparing it?

Ozon: Very often in the script you give many details, you explain many things, and you realize when you have the actor in a situation you don’t need all that. Very often just the eyes of the actor or the actress can be enough, and you can cut two pages of the script, which is always a good situation. In the case of this film, I would say I was very surprised. For example, the scene with the stepfather when she’s in front of him and she seduces him in a certain way. It was not written exactly like that, but there was such a chemistry between the actress and the stepfather that it gives something stronger to the scene. This strong girl is playing with her stepfather and it’s something that comes very much from the relationship between the actors. Or the scene when the mother beats her daughter, you know, she was not supposed to do that. The actress who played the mother, Géraldine Pailhas, she has a daughter, and she said if my daughter did this, I would be able to beat her, but just after I would say, forgive me. So we did that in the scene and I think it’s very important to understand the character of the mother.

Filmmaker: Did you want to heighten the sense of the separation between the two generations by having the mother be so unsuspicious, seemingly unaware of what her daughter was going through sexually?

Ozon: What is uncomfortable in the film is the fact it can happen in any family. For parents it’s very disturbing to see your children growing up and becoming adults. During this time they are changing so much, because of their hormones in their bodies, they’re discovering sexuality. They become foreigners to the parents, and it was important to show that in the film. Suddenly the mother doesn’t recognize her daughter anymore. She’s no longer the little girl, very cute and very nice. She’s becoming someone else, and it’s very violent. It’s violent for the parents to assume and accept that their children have their own lives and they will develop their sexuality. It was something, which really interested me, especially the certain part of the film when I change the point of view and I go in the point of view of the parents and especially of the mother.

If I would’ve done a film about a teenager doing prostitution as a young director — I mean ten years ago — it would’ve been a totally different film, because I would’ve done something closer to my generation. And actually to do prostitution is easy today. I mean with the internet it’s very easy to find people to have sex with. So I think my film would’ve been totally different back then. But now I understand the point of view of the parents more. I think I was more violent, more aggressive when I was younger. I think it’s normal, when you are younger you are searching; you want to find your place. So very often you say things very violently. And maybe now I’m able to give more complexity to the situation, more ambiguity, which interests me. And I don’t want to shock for shock’s sake, you know. So I try to think how to place the spectator in a position to think about the situations of the film.

I had a different ending in the script. And I shot two endings. So I showed the two endings to friends and I asked them “Which one do you prefer?” I knew the one I prefer, but I wanted to be sure that it was good for the film. So it was quite interesting to show that. And I was quite surprised to see some women of my age who have a daughter, they were so shocked by the film, but in a good way they were shocked. And just after the screening they said to me, “I have to call my daughter. I have to speak with her.” I think if the film was so successful in France it was because it gave the opportunity to many parents to speak with their children about the absence of the lack of discussion and the conversation between parents and children.