Under The Skin and the Problem with the Adjective “Kubrickian” 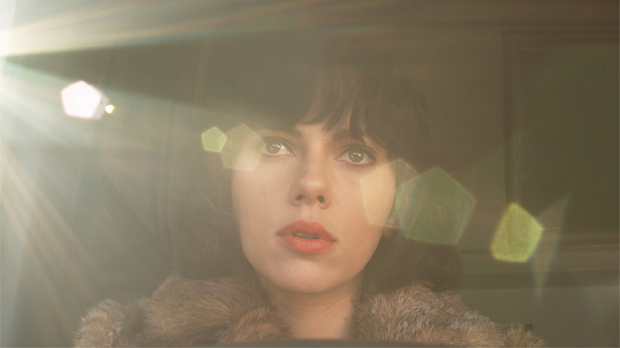 Jonathan Glazer, Under the Skin

As unclassifiable and startlingly original as promised, Jonathan Glazer’s Under The Skin has an obvious experiential agenda. Scarlett Johansson’s unnamed alien rides around Glasgow, picking up men, bringing them back to her pad for sex, then harvesting them for meat. As sound designer Johnnie Burn told Ashley Clark in an interview Filmmaker published earlier this month, the intensely fussed-over sound mix literally took years. In the mall, at the club or on the street, different snatches of ambient sound compete for attention, with normally unexamined noises briefly coming to the fore. The movie is totally successful at defamiliarizing ordinary actions and objects. When Johansson’s alien tries cake (her first taste of normal food), a long close-up follows her fork as it moves with painful slowness towards her mouth; it’s like nothing of the kind has ever been filmed or experienced before.

The opening montage — seemingly the creation of a cosmos, eventually revealed as the construction of an alien eye — has drawn 2001 comparisons, which mostly speaks to the lack of plentiful Big Bang reference points. Glazer is often pegged as “Kubrickian,” a stock adjective that normally signifies fast-moving Steadicam tracking shots vigorously following someone in motion: Danny riding his bike through the Overlook Hotel in The Shining is the prototypical example. The director admittedly brought this upon himself, if only because of his A Clockwork Orange-referencing video for Blur’s “The Universal” (not to mention hiring Steadicam inventor Garrett Brown, who worked with Kubrick):

Conflating a director’s entire style, ethos and thematic preoccupations with the introduction of a specific piece of technology is the kind of reductive association a suitably theory-minded scholar could have a field day with. A more meaningful definition of “Kubrickian” would be to consider his films as architectural projects: the enormous Overlook and the entirely fabricated New York City of Eyes Wide Shut are formidable concrete realizations of a universe created top-down. In that respect, Glazer couldn’t be less “Kubrickian”: Under The Skin floats through as-is Glasgow, mediated by a limited dose of entropy. (Johansson drove the van and had agency in deciding where to drive.)

As Jonathan Rosenbaum noted in his contemporary review of Eyes Wide Shut, Kubrick’s desire to be surprised by his one work led him to make efforts to not “impose interpretations on his stories, striving to keep some particulars of his stories free from his intellect, and ultimately letting his unconscious do part of the work.” Allowing room for thematic opacity was key to preserving mystery: most obviously in 2001 but consistently in his otherwise extremely controlled work, any kind of analytical decoding process must stop at a certain point. They’re not puzzle films to be solved: they have the enigma of heavy metaphor without a tedious one-to-one relationship to concrete meanings.

[Spoilers follow] Glazer threw out most of what Michael Faber’s book was actually about (capitalism, exploitation, etc.), while co-writer Walter Campbell didn’t read it at all; conscious effort has gone into distancing the film from its source’s concerns. On its most obvious level, Skin meta-ishly foregrounds Johansson’s seemingly intrinsic sultriness and makes it her character’s defining attribute; as a broader take on gender relations, though, Under The Skin is willfully perplexing. (My viewing companion had the most cogent take I’ve heard so far: Johansson is perceived solely as a sexual object, and once she removes this part of her identity she’s killed.) Whatever’s at the film’s core, it seems built to be inaccessible even to those making it: its thematics are as unknowable as our world is to the alien. That’s not an evasion, just the preservation of mystery.