Give the People What They Want: Niche Web Series as Sustainable Filmmaking 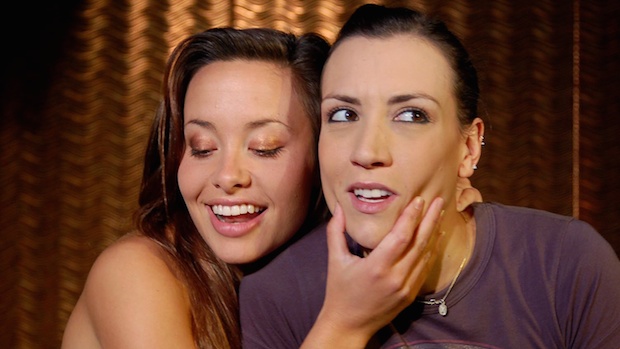 by Julie Keck and Jessica King
in Filmmaking
on Jun 13, 2014

Like many filmmakers, early in our career we were seduced by dreams of showing our first feature at Sundance or SXSW; rubbing elbows with Debra Granik, Lena Dunham, or maybe even Michel Gondry; and, soon after, signing on for our very own series with HBO (or a three-picture deal with Magnolia…we weren’t picky). But while waiting for the acceptance letters that would change our lives forever, we decided to dive into Web 2.0 and became our own homegrown social media marketing machine, the digital version of a mom-n-pop gas station, complete with the perfect snacks, a foreboding bathroom with surprisingly nice-smelling soap, and a pump with a sticky switch. We found yet another way to make it, we two, so we put on massive sunglasses, ready to face a dazzling career fueled by visions of millions of likes, shares, and YouTube views.

But as we built our stack of projects, we looked around and realized…we were lacking an audience. Sure, we could get a few hundred people to watch the videos we posted, and we were pretty good at getting people to show up for screenings at film festivals around the country, but we weren’t building the type of audience that would allow us to turn a profit or, ultimately, sustain ourselves as filmmakers.

We weren’t sure where we were falling short: we were making projects we believed in, getting better with each one, and we were also dedicating a good amount of time to social media. We were building our crowd. We were dancing as fast we we could. But we couldn’t amass the crowds we needed to make filmmaking a sustainable enterprise.

Imagine a sky full of millions of red balloons (totally environmentally-safe balloons that won’t interfere with goose flight patterns or weather instruments or airlines, balloons that won’t pop and fall into the ocean and hurt sea turtles…in fact, these balloons are made of sea turtle food… sorry, we might be getting off topic). Now imagine that those balloons are your potential audience members. As a new filmmaker, you might start with 10 or so in your hand: your best friend, your parents (maybe), your college roommate, that guy at work who laughs at all of your jokes, etc. But you want more. You need more if you’re going to have a real go at this job. You might be tempted to let go of those 10 in your hand in order to reach for those free floating millions with both of your hands. But how many do you really need for your film life to survive?

YouTube phenoms make audience gathering look easy. PewDiePie earns upwards of $7 million a year, and Charice used her YouTube sway to earn a spot on Glee. If they can do it, you can do it, right?

Perhaps, but only if you find an audience that wants what you have to offer.

What type of content are people looking for? Well, right now everyone wants to see cat videos, montages of Kristin Stewart making her ‘ew, that smells’ face, and home videos of little kids hitting their dads in the wang with tiny bats. And there’s no way you can compete with kitties, KStew’s face, and wangs. Unless you build yourself an audience first.

Bad news: it’s actually harder to gather a fan base than it is to corral the kittens in those videos. Part of the reason is that even though you’re looking for them, they’re not looking for you. You are like a middle child lost at the mall — no one’s going to notice you’re missing until they get home. And maybe not even then.

Like most artist-types, we resisted spending time doing the business-y side of creating. We wanted to be writing and shooting, not researching where our audience was or doing something tacky (and productive) like collecting their email addresses. Plus, the money part: it always seems crass, doesn’t it? No one likes asking, no one likes giving…it’s a bummer situation. But we had to find a way to make this happen, unless we wanted to be the filmmakers who lived in a box under the highway.

Then in 2010 we met Christin Mell, co-founder & CEO of tellofilms.com, a lesbian-focused video subscription service. Christin had what we lacked: a platform for stories with a clearly identified audience and a platform that made the money part seamless and even friendly. Most importantly: she knew exactly who her audience was (lesbians and fans of lesbian stories), and she had embraced her niche. Rather than grasping for all of the balloons, she was only going after certain balloons, balloons that were often tied together and bundled in little groups.

Luckily for us, we had something Christin wanted: a knack for rich characters, snappy dialogue, and stories that were the perfect size for her web series hub. And we also happened to be lesbians. Not that that was a requirement.

It wasn’t our goal to be ‘web series makers.’ We were filmmakers. But we soon realized that a) we needed to expand our definition of “filmmaker” and b) that web series were a great way to connect dedicated filmmakers and audiences. For filmmakers, web series give you a chance to make what you want rather than watering down your content to fit the latest TV spec craze. It’s also a way to have creative control and, potentially, get paid for your work. When was the last time you got paid for your film? We get checks monthly from tello that pay for our rent, car payment, and embarrassing hummus habit. (Don’t tell us the last one is okay, you enablers.)

At the same time, web series provide niche audiences with an oasis in the dry desert of mainstream television and movies that either ignore them or stereotype them. Sure, there are a couple of TV shows out right now that have gay characters at the center, but only a couple. Can you imagine if every network had a gay show, or if 10% of all programming was gay-centered to reflect the estimated 10% of the world population who is gay? We can’t either. We have a long way to go before that happens; in the meantime, there are plenty of web series ready to fill the void.

When cable and broadcast TV say, “Ok, hold up, that’s enough gay programming for now,” web series can keep going. And there is the potential for there to be lucrative web series channels for a variety of underserved audiences: gays, lesbians, transexuals, black people, Asian people, gamers, linguists, knitters, women (no forget it, no one’s going to market to them), people who love hats, people who like birds, people who love putting hats on birds…anything. If you like it, chances are there are other people who like it, so there…there’s your audience for it. When you realize that you’re one of the balloons, it’s easier to understand what to say to other balloons…er, people…to get them interested in your work.

Web series are great for creators who are brave enough and dedicated enough to tell stories for a niche audience. Look at the makers of the web series The Misadventures of an Awkward Black Girl, Broad City, and The Couple. None of those creators squandered their time writing Grey’s Anatomy specs or trying to cater to writing labs that only accept 10 people a year (and only if you know someone’s mom’s mom.) They made stuff for specific audiences that they knew had traditionally been neglected and poorly represented, put it on the web, and reached out to the audience that they knew would appreciate what they’d done. They put their noses to the grindstone, they put the pedal to the medal, they hauled ass…and they made something. And they made it well. Now all of them have TV development deals in various stages. All because they put their money where their mouths were. You can’t tell us it didn’t help them to have produced work to show when they finally got in the right room with the right person.

Making lesbian web series probably isn’t going to get us into rooms like the ones Issa Rae, Abbi Jacobson, Ilana Glazer, or the team from Black & Sexy TV have crashed: our demo is much, much smaller than any of their. Our most popular series on tello, I Hate Tommy Finch, hasn’t gotten millions of views. However, it has, in addition to the two other shows we’ve made for tello, earned us enough money for equipment upgrades, business-related travel, and, as of this month, our whole life. We are both employed full-time with tellofilms, which means we are full-time filmmakers. Is this how we imagined it happening? No. But we’re are very happy that we’re here.

The best part is that our series on tello have made our target audience happy and have made a difference. Countless tello subscribers have told us that seeing our shows have given them the courage to come out to their families, to accept their own differences, to pursue the loves of their lives. We are making stories that don’t matter to most, but are very important to a precious few.

We have our bundle of balloons. It may not be the whole million we saw when we first started dreaming of our filmmaking life, but it’s a sizable group, big enough to lift us up off the ground, just a little bit, and enjoy what we’re created. Now…back to work.