“Muscle Memory without Emotion”: The Rise of the Action DP 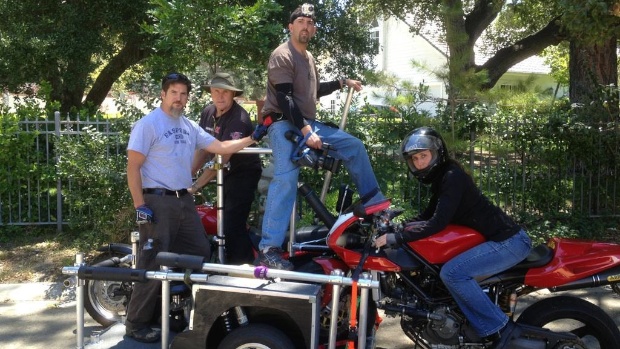 Lawrence Ribeiro (with camera) on a process rig.

by Lawrence Ribeiro
in Cinematography, Filmmaking
on Jun 26, 2014

Shifts in technology and global film production over the last several years have greatly impacted action films. Technology like the Canon 5D changed the game. More affordable and smaller HD cameras, as well as cheaper editing systems, have enabled many stunt performers and cinematographers to collaborate on and innovate new images together. This in turn has created a recent hybrid in action movies — the action DP, someone who specializes in shooting action, with a background in cinematography and stunts or action of some sort.

I came to shooting action through my own personal background. For me, it was a love of being on the edge, where the adrenaline kept pushing me into more extreme situations. High-speed chases, conflict areas, heli-logging — these are situations where there are no second takes, and it’s not the world of make-believe.

A lot of stunt performers and coordinators are ex-Olympians, national and world champions, and some come with an edge, some come with discipline. These are folks who can perform under duress, and have also learned to play to the camera. Sometimes there’s a fine line between being a top stunt performer and getting on a funniest home video. Prep, ability, background, and experience make the difference; herein lies the culture of stunts and the action world.

Stunt performers are highly conditioned and their lives are on the line every day. Let’s take the stunt performer’s point of view. When they have a crash or accident they will tell you the smallest detail with clarity and without emotion. They have all these skills available to them, and even more so, their perceptions are greater. Some of the fellows who fight in action movies have fallen tens of thousands of times in order to perfect that one fall onscreen. It is muscle memory without emotion. The stunt person has to convey the emotion physically whereas the actor has to convey the emotion, emotionally. Both performers serve a different purpose.

Not everyone can do both, but certain performers — like Tom Cruise, Jason Statham, Stallone, John Wayne, Burt Lancaster, Douglas Fairbanks — can and did both exceptionally, hence the Action Star.

The ability to innovate and collaborate has also spread to the editing world. Traditionally, you’ll find that not too many stunt coordinators/2nd unit directors are happy with the final product because what they envisioned, coordinated/choreographed and what was edited, often ended up differently. The 2nd unit has its own culture and identity, different from the 1st unit world.

For example, with the Fast and Furious movies, Spiro Razatos is at the helm as 2nd unit director and he is getting his edits in the movie. Edits are often done onsite and worked out right there, not weeks later in some dark editing bay somewhere in Los Angeles. Again, technology is enabling the creativity and innovation of the 2nd unit world to assert itself into the 1st unit world.

If you don’t provide the right shots and don’t have the right editor, the final product will surely reflect that. When shooting, I’m not concerned with rack focus, or the best color sampling, etc. I’m thinking, are these shots going to get the audience on the edge of their seat? Will the action serve the story? I’m a cog in the total picture, as are the performers, coordinators, choreography, equipment, cameras, lenses, and editor. All these factors can encompass what we call Action Design.

So when any one of these are not on the same page, that can become the weakest link. And in the 2nd unit/stunt world that can be lethal.

For example, having young people do a stunt with fresh bodies makes them a perfect candidate for a stunt performer. However, without the years of training, their adrenaline often gets the best of them. The adrenaline is so overwhelming that they don’t actually hear the director! This is dangerous. It can be even more life-threatening when an actor is used as a stunt performer, and can’t get a handle on his adrenaline. This can be even more amplified in the indie world where there isn’t always a budget for a full stunt team.

Veterans can make your life much easier as they’ve done it thousands of times. In some cases, you barely have to move. A-list stunt people are, frankly, awesome. I’ve worked with a stunt performer who doubles for Chris Hemsworth and Channing Tatum. He is probably one of the most talented, and easygoing performers in the business. He makes me look good. It’s two takes or less. A subtle nod and a quiet “yeah”…and he’s ready.

You see, you may meet some yahoos and they beat their chests and tell you how great they are. Some of these guys will take the stunt car, crash it, get fired but will be smooth enough to stop by craft services on the way out!

Ever hear of the movie Hooper? Burt Reynolds is the aging stunt man, with Hal Needham directing a part loosely based on his experiences in that field. Hal received the lifetime achievement award two Oscars ago, and unfortunately, left this world early this year. I mention this movie for a couple of reasons, as Hooper is stunt culture. You’ll find with a lot of stunt people, this is their favorite movie. Hal also did Smokey and the Bandit The Cannonball Run and what he was doing was conveying his point of view. Hal was one of the best stunt performers of all time and he revolutionized the industry. Then the ’80s brought us the Go-Big or Go-Home action film, and the ’90s brought the start of CGI. Now we have tent-pole movies dictated by financial algorithms.

Hal knew action but the cameras were massive back then. Could you imagine if they had these smaller cameras? Something Hal had discovered was the physics of shooting and camera movement with the terms “hyperkinetic” and “hypokinetic.” “Hyper” means faster and “hypo” slower. Then there is the speed which a lens can move, since if you move too quickly, the audience won’t be able to follow it. Since the Bourne movies, and now with gamers and their trained/quick eyes, the speeds have changed too. Essentially, the sensibilities for watching action have changed.

If we were to go back to The Wild Bunch you would se stylized filmmaking in the quick edits or Peckinpah’s trademark of shooting with 66 frames. Nowadays, everyone wants to “shoot it like Bourne,” a la Paul Greengrass’ documentary-like hyperkinetic style.

There are examples of bringing outside influences into the 2nd unit crew, for example, Oliver Stone’s Any Given Sunday. The 2nd unit director Alan Graf, played in the NFL, and within the movie was LT, Lawrence Taylor, Jim Brown and Dick Butkus — those guys are not only legends, but they actually changed the game! When you watch the footage, you get a sensation of being on the offensive/defensive line that is realistic and intense. The camera work was spot-on.

There are a lot of different personalities, talents, levels and attitudes in the 2nd unit/action world. Each brings something to the table. On my teams, if the performer or crew member doesn’t have the confidence level, but they have the right attitude and other skills, I will find an appropriate spot for them and train them accordingly. Jackie Chan built a paradigm where his team trains 5 days a week together. Razatos adopted a similar paradigm. As I mentioned before: in the 2nd unit world, you are as good as your weakest link. You need to know everyone’s strengths and weaknesses. There is no room for error and I want everyone to go home or to their families.

That is the essence of the 2nd unit/action world. We work together to push and support each other. And thanks to that culture of collaboration and innovation, where rules are broken and rewritten every day, some of the most dynamic imagery is happening in action today.

Lawrence Ribeiro is an action cinematographer who specializes in combining stunts, culture, movement and aesthetics. Lawrence has shot over 100 action sequences, from car chases and motorcycle stunts to fight sequences, and has been mentored by the top stunt coordinators in the industry – Garrett Warren, Gary Powell and Andy Armstrong. Earlier in his career, Lawrence also trained classically under well-known cinematographer Howard Wexler as well as Lane Leavitt, an innovator in the stunt world. He has written for ICG magazine and given talks on action cinematography at the Art Center College of Design and at Film Independent, and currently serves on the Advisory Council for the Previsualization Society. In April of this year Lawrence was privileged to be a judge for the Emmys.