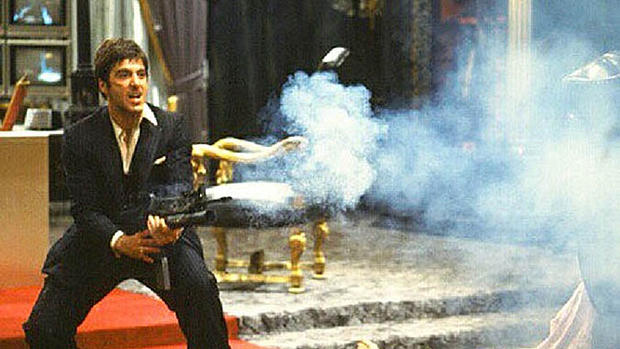 by Scott Macaulay
in Festivals & Events, Filmmaking
on Jul 9, 2014

“Say hello to my little friend!”

If you’ve ever fantasized unleashing your inner Tony Montana — or, more accurately, your inner ’80s-era Brian DePalma — then the latest crowdsourced art project from the Miami-based Borscht Corporation is for you. Borscht has announced Scarface Redux, a fan remake of the 1983 drug lord epic, with filmmakers from all over the world invited to direct and submit their own 15-second segment. The clip can be “live action, animation, puppets, legos, Chihuahuas, it doesn’t matter!”, the site says. The finished film will be screened at the Borscht Film Festival in December at a free event and then will be placed online.

Despite the seeming freewheeling nature of the project, there are some rules. Like: “Please refrain from using any loaded weapons or actual drugs while shooting your scene. If you are under 18, you are not permitted to film scenes with nudity, or while we are at it, any scenes at all. Lets keep this as fun and safe as possible.”

A statement of purpose is found at the site:

This project is organized by the Borscht Corporation, a nonprofit collection of artists with the mission to “redefine Miami in cinema.” For much of our history, this meant we were battling the spectre of this movie whose iconic imagery loomed large in every conception of Miami, both cinematic and real. The organization itself was founded with the belief that while the cocaine cowboys narratives of the city were real, there were other, equally interesting Miami stories to tell. We’ve spent the better part of the last decade telling these stories and have achieved some success, as the works have been screened at hundreds of film festivals around the world, museums, galleries, and TV while garnering millions of views online, slowly but surely creating a new cinematic identity for the city.

Now, through this project, we hope to engage the most influential Miami movie ever made. Whether you cringe at Pacino’s Cuban accent, delight in the style of cinematography, or just love the one-liners, there is no denying that Scarface is a fun, entertaining movie. We can’t wait to see you how re-imagine it!