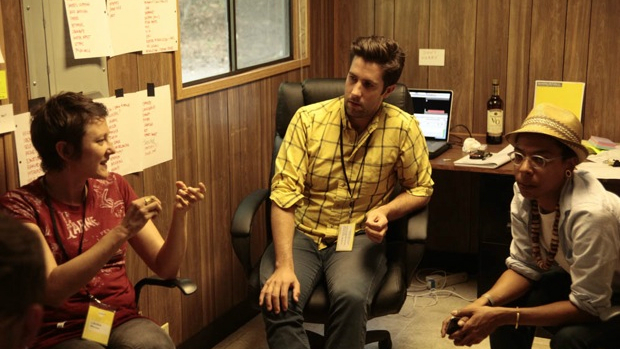 by Lyric R. Cabral and David Felix Sutcliffe
in Filmmaking
on Jul 21, 2014

[Below, co-directors Lyric R. Cabral and David Felix Sutcliffe share their experiences at the Sundance Documentary Edit and Story Labs. For more background on the team, read our 25 New Faces profile from last year.]

I have closely known the main character of our film for 12 years, and have witnessed, firsthand, many of the salient moments of his lengthy career as an FBI counterterrorism informant. We met while he was active in two separate international and domestic sting operations, and our trusting relationship has always been complicated by both government surveillance and the turbulence of his past. Because of his desire to reveal his story for a wide audience, I have wrestled with the balance of bluntly articulating my feelings toward our main character, and the journalistic obligation of telling the “reality” of his story without the interference of my moral judgments. Since David Felix Sutcliffe and I began filming (T)ERROR in January 2012, our emotions and feelings toward our main character have oscillated as he has increasingly revealed the depths of his character on camera.

After David, editor Laura Minnear, and I received our invitation to the Sundance Documentary Edit and Story Labs, the lab directors engaged me in intimate conversations about my relationship to our main subject and encouraged me to think about my voice in the film. Throughout the years that I have known our main character, this is the precise emotional terrain that I have avoided traversing. How will I categorize our relationship to explain the depths of access for an audience, to demystify assumptions that may be brought to the material? Will I include myself in the film (although I value cinema verité and letting footage speak for itself)? In the anxious days leading up to the lab, my mind raced with the emotional impacts of answering these questions, knowing that the result could afford the film strong clarity.

After a flight to Utah and a scenic drive from the airport to the Sundance Resort, we settled into a rustic mansion, nestled in the Wasatch Mountains. On the afternoon of our arrival, we met our acclaimed creative advisors and lab participants in a sharing circle, guided by Director of Documentary Programs Tabitha Jackson’s opening question: “Why do you do the work that you do?” After hearing each varied and insightful response, I was creatively inspired and excited to engage with the advisors and filmmakers throughout the week. The success of the group introduction somewhat calmed my anxieties about presenting our rough cut for the distinguished cohort; we were second on the schedule to screen the next morning.

Having bravely shared our rough cut with the advisors, we received a chorus of inundating critique – there were voices singing in harmony at times, and others wailing in discordant, resounding tones. After an hour I was creatively exhausted by the quantity of insight, but the advisors’ notes of overall confusion, and that the cut showed a lack of the filmmakers’ perspectives, hung in the air. Precisely articulated by creative advisor Jon Else, “There is tremendous underbrush that needs to be cleared out in this film.”  Advisor Joelle Alexis acutely predicted, “You are going on a complicated journey.”

Over the next few days, we came to know the creative advisors well as they shared presentations of their work and, visiting in our editing trailer, offered detailed notes on our rough cut and footage selects. I valued their diverse insights into our material and, increasingly, saw some advisors becoming personally invested in the success of our film. This became evident at mealtimes and in quiet moments, when they would pull me aside and continue conversations about (T)ERROR and outside interests.

On the third day of the labs, veteran advisor Lewis Erskine asked, “Would you like to take a walk?” The offer proved too good to decline, as the resort offered the opportunity to stroll towards a river, a waterfall, or the mountains. However the picturesque walk soon turned into an emotional “check-in,” where Lewis voiced some concerns about interactions that he had seen in our edit trailer. Lewis’ sage observations, based on a generosity of spirit and a desire for (T)ERROR to reach its full potential, moved me and led to a breakthrough for the film. As a team we needed to reconnect with the initial reasons that we started making the film, step back from the material, and reassess our priorities. By creating distance from our footage (days 1-3), we were able to think about fresh ways of conveying information to an audience, couched in emotional as opposed to intellectual context. This revelation enabled us to return to our material with new eyes, looking at the scenes with a re-determination of meaning and sensitivity.

On the third day of the labs, Jonathan Oppenheim, a creative advisor, asks me how I’m doing. His question is genuine, not just mechanical banter. I’m too discombobulated to describe my emotional state, but there is an idea that’s been percolating for the past day or so which I start to describe to him. It began as a simple, self-pitying query, somewhere along the lines of, “Why am I so dumb?” The sentiment arrived in the midst of our first day of feedback — not so much a direct response to the advisors’ critique of our project, but rather a lament that I was incapable of fully absorbing the avalanche of ideas and insights they had loosed upon us. A fraction of those ideas, I think, are penetrating the top layer of my cerebral cortex. The rest, however, are swooping past like pine trees on a slalom slope, so fast that I’m developing a case of intellectual whiplash.

I tell Jonathan that I am beginning to see my intelligence, talents, and abilities as an oppressively small country, one that I must escape from if I want this film to actualize its full potential. At times the advisors act as border guards: their criticisms reinforce the barrier before me, and send me stumbling back into a cluttered and confusing landscape. At other moments, they are kindly Samaritans, pointing out gaps in the fence where maybe I can wiggle through, offering nourishing praise to help sustain me as I explore this new territory. Jonathan chuckles as I speak, his laugh a mixture of wicked glee and sympathy.

“Use your limits as a starting point.” This notion has circulated in multiple forms these past few days. It’s an effective way of re-envisioning the creative and narrative challenges that our film presents. Specifically, our initial visual strategy for the film has become an obstacle to our main character, obfuscating rather than illuminating him. Rather than toss our ideas into the scrap bin, the advisors encourage us to preserve them. The goal is to craft a strategy that will not only motivate the film’s existing visual style, but can also clarify our central character’s acutely complicated interior. Guided by the advisors, we spend much of Wednesday sketching out a battle-plan. On Thursday, we sift through our mountain of footage, scavenging material that can help us accomplish our task. All members of the team take turns in the editor’s chair trying to solve the jigsaw puzzle before us, and we are aided in the task by assistant editor Mark Harrison.

On the night before Friday’s final screening, we ask Lewis Erskine and Tabitha Jackson to step into our trailer so we can test out our new opener on them before we wrap for the night. Three minutes in, Lewis, without looking away from the screen, stretches his hand through the dark to me, palm up. For a moment, I’m confused. Is he asking for a pen? And then I realize – high five. More than that, he is reaching across the border, pulling me, and pulling all of us, beyond our limits, and into a new beginning. I give a happy sigh as I put my palm to his.

I continued to watch the monitor, as we still had a few minutes left on the timeline before all went black. However I quickly looked over at Lewis and noted that, in the dark, his eyes had a glisten that I will herein interpret as a tear. In that moment I truly felt that we had accomplished something notable. We had successfully collaborated with a series of committed advisors and lab staff who helped to further, and were now bearing witness to, our film’s evolution. As Lewis later confirmed, during another emotional walk, “if I could do this all the time I would, when it works.”

It is a rare moment for me the following night when I step before the advisors and other fellows to introduce our work, feeling proud of what our team has achieved. As an intensely self-critical person, one who is motivated more by fear of failure than hope for success, creative contentment occurs with painful infrequency. It’s only a first step, but I’m thrilled by the progress we’ve made, and overwhelmingly grateful for the generosity that has been extended to us.

The final morning, as I say goodbye, Jonathan Oppenheim compliments me on our team’s progress. “It’s been incredible to see your process,” he says. “It really does feel like a laboratory.” I tell him that I’m uncertain if we were the mice or the scientists. Again he laughs, and again, it is tangled with something sharp, and something sweet. Either way, it’s been extraordinary. Thank you Sundance, and thank you Samaritans.