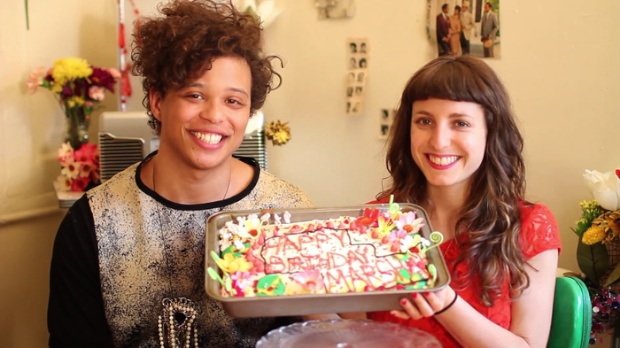 The following is a guest post from Sasha Wortzel, who is raising funds for her film directed with Reina Gossett, Happy Birthday, Marsha! on Kickstarter.

“We were ladies in waiting, just waiting for the thing to happen. And when it did, we were there,” Sylvia Rivera recalls in a radio documentary produced in 1989 – 20 years after the historic Stonewall Riots in New York City. It was the first documentary of any kind to examine the riots. Since then, there have been a handful of films that deal with this tremendously important event in LGBT, and I would argue, U.S. history, but none have told the story of the riots from the perspective of the trans women responsible for igniting the riots and fighting most fiercely against the cops that night.

It’s now been 45 years since the Stonewall Rebellion, and still the leading role that street queens, trans women of color and gender non-conforming people had during the riots hasn’t received the recognition it deserves. That’s why Reina Gossett and I are raising funds via Kickstarter to make our film, Happy Birthday, Marsha! We want to change that.

Happy Birthday, Marsha! is about legendary best friends and transgender rights activists, Marsha “Pay it No Mind” Johnson and Sylvia Rivera, in the hours before the 1969 Stonewall riots. It’s a hot summer day in June, 1969. Marsha throws herself a birthday party, but no one shows up. Meanwhile, Sylvia unsuccessfully introduces her lover to her family for the first time. The meeting goes so poorly that she gets stoned and forgets Marsha’s party. Throughout the difficult day, the friends navigate street harassment, police violence, and isolation before converging at the Stonewall Inn to finally celebrate Marsha’s birth. Unbeknownst to them, the NYPD has plans to raid the bar that night. Happy Birthday, Marsha! is the story of two brave best friends and the everyday decisions they made that changed the course of history.

Reina and I met one another through the first Trans Day of Action in 2005, where we also first learned of Sylvia Rivera and Marsha P Johnson. Shortly after we began collaborating on short films for the Sylvia Rivera Law Project. While I was directing my first feature documentary, Reina was undertaking groundbreaking work, researching and documenting the lives of little-known Sylvia Rivera and Marsha P Johnson. One day Reina and I got talking and decided to make a documentary together about Sylvia and Marsha. In 2012, we were awarded a fellowship with filmmaker Ira Sach’s Queer/ Art/ Mentorship, and, under the guidance of Ira (Keep the Lights On, Love is Strange) and Kimberly Reed (Prodigal Sons), we found ourselves writing a script based on Reina’s extensive archival research on Sylvia and Marsha’s lives. The film combines compelling archival material and documentary footage with scripted, highly stylized narrative scenes performed by actors. We like how this method of blurring fiction and non-fiction allows us to use archival documents as a point of departure to creatively re-imagine the events that took place that day.

Rarely do marginalized people drive stories about themselves on-screen, but this project is different. We truly believe how we tell the stories of our heroes matters, so we are drawing upon our community to make and fund this film because we have an opportunity to make a movie written, directed and produced by people living Sylvia & Marsha’s legacy through their work. This film is written, co-produced and co-directed by a trans woman of color, and will be the first of its kind to reach a wide audience with the support of our backers and community.

While this year we have seen an enormous increase in visibility of transgender people (for example, Laverne Cox on the front cover of Time Magazine), the National Coalition of Anti-Violence Projects also reported that this past year was the highest number of murders of trans women of color ever documented. Transgender and gender non-conforming people of color today are still navigating similar violence, harassment, and isolation that Sylvia and Marsha and trans women of their time were dealing with. This film intends to provoke discussion about why this is still happening. We are working to transform oppression through art.

When we launched our Kickstarter campaign, we were hopeful, but we really had no idea what to expect. We have since been blown away by an incredible outpouring of generosity. Superstar Laverne Cox even tweeted our campaign! The support we are receiving has confirmed what we felt already – the world is ready for a film that vividly depicts the rich legacy of our historical transgender figures, like Sylvia and Marsha, and their integral role in the modern LGBT rights movement.