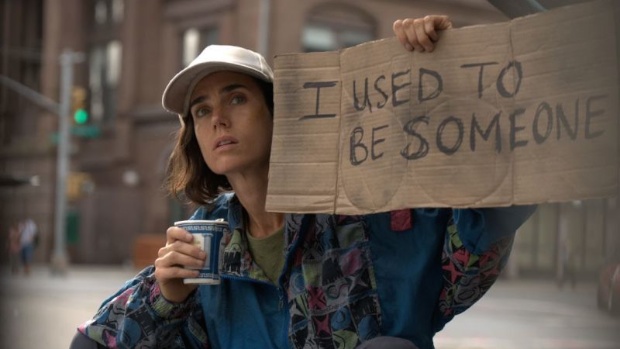 by Scott Macaulay
in Director Interviews
on Sep 11, 2014

Actor Paul Bettany makes his directorial debut with Shelter, a drama about homeless junkies on the streets of New York starring his wife, Jennifer Connelly, and Anthony Mackie. Although Bettany references below Jerry Schatzberg’s classic Panic in Needle Park, he also emphasizes that his film moves far from those gritty New York streets of yore, finding an unexpectedly beautiful visual style to capture the life of a new generation of Gotham addicts. Shelter screens at the Toronto International Film Festival on Friday, September 12. Below, I talk with Bettany about cinematic inspirations, city moments and directing his wife.

Filmmaker: There’s a rich history of New York-set films about life on the streets. Were any of these films particular influences on Shelter, and how does Shelter reimagine the genre?

Bettany: Jerry Schatzberg’s Panic In Needle Park, Martin Scorsese’s Mean Streets, Coppola’s The Conversation (although that is shot in San Francisco) were not only influences on this movie but, moreover, some of the films that made me want to be in the movie business as an actor. It is true that NYC has been shot and shot and shot — in fact, one feels the pressure to shoot it with respect and reverence. However, only tourists look up at its buildings; New Yorkers ignore the city and so we ignored it too, and just like in life, when you ignore something, it comes to you. I had in my mind an experience I once had walking into a deli. I gave the homeless guy outside the first note that came out of my pocket — it was a $20 and he went crazy blessing me, Jesus, and the stars. When I came out of the deli five minutes later he hit me up for some more money, and I reminded him I’d just given him the $20 to which he said, “Oh that was you?” I thought, of course — for him, the $20 was in focus, my hand maybe, but mostly the $20. And so we shot as much as we could with a very narrow depth of field trying to imitate that myopia — the next dollar, the next meal, the next fix. Later on in the film we widened out as the characters’ horizons become broader.

Filmmaker: What sort of preparation did your actors undertake in order to inhabit their roles?

Bettany: Mostly I think character preparation is the actors’ job. and I don’t like it when a director tells me how to go about it, just as I don’t tell a director where to put the camera or what lenses to shoot with. If I’m struggling as an actor I’ll ask a question, but mostly I like to prepare quietly and do what I need to do to be ready. However, everything was made available to both actors, and I know Anthony Mackie spent a lot of time at a shelter in Brooklyn chatting to the guys that would come and go. Jennifer Connelly also happens to be my wife so I know more about what she got up to — she did research with Coalition for the Homeless, and with a doctor who specializes in substance abuse. She became a card carrying member of NYC’s needle-exchange program and would often leave me at home with the kids and off she would go to meetings or to hang out at night in parks. She forged a very close bond with an ex-addict, which I believe was invaluable to her research. She also spent months gradually losing weight until she got to a pretty frightening place.

Filmmaker: Your d.p., Paula Huidobro, was one of Filmmaker‘s 25 New Faces several years ago. Could you discuss your collaboration with her and the visual design you worked out for the film?

Bettany: Pre-production was the worst part of this experience for me. It was totally alien, a part of film production that I had never seen. I hated it. It seemed to just consist of people telling me what I couldn’t do because we didn’t have enough money, or how I needed to shoot in the less photogenic archway because it was closer to another location. And just at the moment where I thought deciding to direct was the worst decision I’d ever made, Paula arrived. Immediately we started discussing what we could do and it was just a fantastic feeling. As I mentioned, I had this idea to start the film with a very narrow depth of field and shoot mostly in close up, widening out as the film and the characters’ horizons progress, finally reaching the point in the final act where they are fugitives, and we feel the whole city can see them and there is nowhere for them to hide. (This idea was finally compromised by having to shoot winter in summer and needing to limit what was in the frame). Paula and I started to shot list (loosely) the whole movie and soon arrived at the realization that neither of us wanted to shoot a gritty, granular film about homelessness. Why not afford a story about poor people the same visual beauty usually reserved for the “important” people of our world? Tarkovsky does this brilliantly — Ivan’s Childhood is a very dark movie about the loss of innocence and ultimately the child’s life, yet there are moments of such extraordinary beauty: the sequence where Ivan starts floating through the air, or the scene where he falls asleep and we enter his dream come to mind. In my script there were already moments like this, for example, Tahir and Hannah falling through a NYC puddle and swimming underwater together in a beautiful subterranean world. Paula helped me realize that idea and expand on it so that it felt part of the film as a whole. She has an extraordinary sense of framing and a beautiful aesthetic. I would find her shooting things in-between takes, things that at the time I thought were superfluous, like a kite trapped in some power lines. Well, in the edit room that kite trapped in the power lines became pretty damn important to me.

Filmmaker: Why was it important for you to do a picture about homelessness?

Bettany: I’ve lived in NYC for over ten years and have seen the number of people on the streets increase at an alarming rate. Also heroin is back on the streets with gusto. If you live in NYC you can’t help but see it. I didn’t want to make a film about homelessness being bad or drug addiction being bad because of course it is — I get it, it’s bad. I wanted to find out if there was something else to say. For me the way we judge homeless people is interesting, the way we assume they’ve done something wrong to find themselves in that position. It’s an almost aggressive position to take, because if we didn’t feel like it’s somehow their fault, we’d do something about it. But it isn’t only seen in our response to homelessness, it’s in our response to the world at large. The film being about a homeless couple is only because I happened to get inspired to write about a homeless couple that lived outside my building in Tribeca. But it’s really a story about judgment and forgiveness. In a world of increasing grey areas we are becoming more and more entrenched in these black and white positions, when in fact we are all innocents, all worthy of forgiveness and all deserving of a home. For me that was what the film is about.

Filmmaker: Your wife has been quoted as saying you and she barely spoke on set due to the fast-paced demands of independent filmmaking. Could you discuss your direction of her, and the shorthand you developed based on your relationship together?

Bettany: In the first place, it’s a slight misquote, but really I think she was trying in a lighthearted manner to express how pressed for time we were and, of course, the bit of the story that gets picked up and put everywhere is the bit that sounds juicy. The real story, however, is not one of “taciturn director shuns actress wife on set,” but rather the closest collaboration I could imagine and the extraordinary level of trust that being married to each other brought to the film. Jennifer went to places in her performance that I believe she could only have gone to for me, because we are married. The contract seemed to be, she would give me everything, nothing held back, no place I couldn’t ask her to go, nothing I couldn’t ask her to do and in return I would protect her performance with all of myself. Of course, what you always knew to be true turns out to be true, that if you only have a meager budget, but you are lucky enough to have abundant talent in your cast, they will make you look like you know what you’re doing as a director.