“Take What’s Useful from Your Teachers”: Denzel Washington and Antoine Fuqua at TIFF 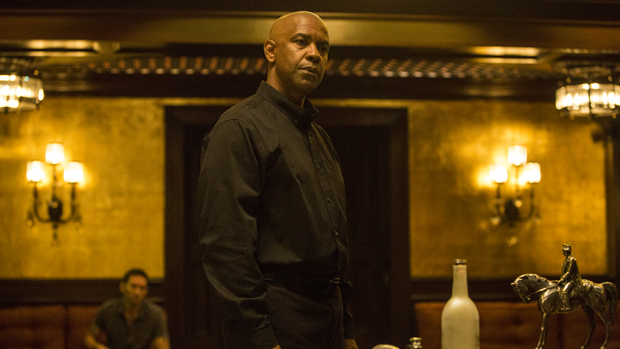 This week Denzel Washington and director Antoine Fuqua unveiled their new thriller The Equalizer at TIFF, but over the weekend they spoke at a 90-minute Mavericks conversation. About 500 fans packed the elegant Isabel Bader Theatre a few miles north of the TIFF Bell Lightbox on Saturday afternoon to hear Washington, who dominated the casual chat.

Several times, Washington implored the many actors in the audience to perform on stage, not film. “Acting is acting,” he declared. “I don’t know what film acting is. The truth is the truth.” His first love is theater; film was an accident in his life. “I wasn’t planning on it,” he said. “My goal…I wanted to be James Earl Jones.” In fact, Washington hardly watched movies growing up in a household run by his minister father: “I used to hear about movies from my friends [though] anything religious like King of Kings we could see.” As a teenager he adored blaxploitation flicks including Shaft and Superfly, but never dreamed of being in the movie business.

Then one summer, when Washington was working as a young YMCA counselor, he appeared in a talent show for kids. Someone said, “You’re a real natural on the stage. You ever thought about acting?” He switched majors at the college where he was flunking and landed key roles in The Emperor Jones and Othello. “I started reading and falling in love with Eugene O’Neill,” he recalls. “The pain he went through writing these plays, I was getting into it.”

Fuqua similarly entered the movie business from a sideways angle: he took art class where he first saw Akira Kurosawa’s storyboards. “Seven Samurai, it blew my mind when I saw it as storyboard, then I saw the moving picture, the film,” he recalled. Fuqua grew up adoring Bruce Lee movies like Enter the Dragon, “but there was something about the samurai and the fight for justice that was interesting.”

That led to working in New York as P.A. on music videos and TV commercials. One day on a freezing cold set in New Jersey, the young Fuqua suggested to the director to save time on a difficult shot by shooting a reflection off a car. The director scolded his P.A. at first, but later invited him to watch dailies to encourage him. “He’s got a good eye,” his mentor said.

That prompted Fuqua to started making his own music videos and commercials, which became his film school. “You start to learn cameras and lenses, and develop a relationship with them,” he explained. “Your camera becomes another cast member. In music videos you learn how to use them and stimulate people, and the power of a shot, and how quickly an audience can absorb something. In a commercial you have seconds for people to observe, focus and understand.”

Later in the conversation, Washington surprised the audience when he admitted that a few years ago he was disenchanted with film acting until he starred in August Wilson’s Fences on stage. “I was reawakened by Viola Davis,” who “blew everybody’s socks off” in rehearsals and forced Washington to dig deeper into his role. “It reminded me of the way I used to work in theater, because you can get lazy. That’s one of the reasons I did a play.” Both captured Tony Awards in 2010 for their work.

Another key moment in Washington’s career happened in the mid-’80s when he was offered a lot of money to make a movie he really didn’t care to make. “I felt sick about it,” he recalled. He phoned Sidney Poitier for advice, who “didn’t tell me what to do, but he said to me that the first three or four films you make will determine how you’re perceived in this business.” Washington turned down that role and instead appeared in the late Richard Attenborough’s Cry Freedom, which earned him an Oscar nomination.

Most audience questions came from actors and were the highlight of this conversation. An Hispanic actor asked Washington how he overcomes racial barriers to land leading roles as a black actor. “Don’t compromise,” was the answer. “You gotta be able to do Training Day for lunch and Julius Caseear for dinner.” He implored the young man to forget film and television, and act only in theater. “Film is a director’s medium,” Washington said. “It’s not an actor’s medium. You could be doing the best speech of your life and the director could be pushing into a bottle.” He paraphrased Bruce Lee: “Take what’s useful from your teachers, then create your own style.”

A young black actress asked Washington how he stays grounded. It evolved into a prolonged and philosophical exchange rarely seen in these conversations.  “I just try to improve as an actor,” Washington answered. “Don’t try to be famous. Be the best you can be. The rest is out of your control.”