NYFF ’14: David Cronenberg’s Maps to the Stars and Consumed 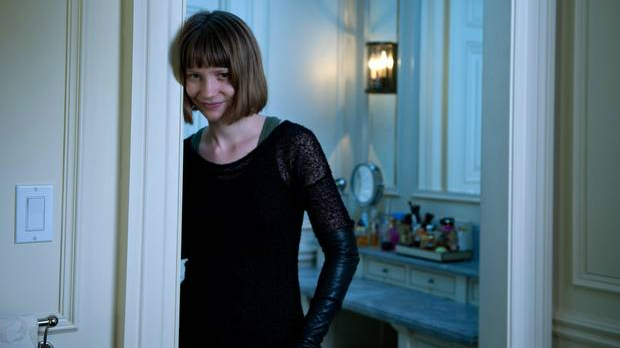 There’s something about anti-Hollywood satire that brings out the worst/most facile in otherwise great filmmakers. The prime example is probably Robert Altman’s The Player, which pretends to be aghast that studio executives have never heard of The Bicycle Thief and concludes that’s why everything sucks. Oddly, Scream 3 may be the only satire in this vein with real teeth, since its murderous mayhem is instigated by a need to avenge a decades-old casting couch act of sexual aggression, something of more consequence than the usual “those philistines rewrote my script by committee” japery.

David Cronenberg is decidedly not calling from inside the house: Maps to the Stars represents the proudly Canadian director’s first film actually (albeit partially) shot in the states, let alone to include footage shot in Hollywood itself. The satirical perspective is that of the fundamentally intolerable embedded almost-native Bruce Wagner, who’s made something out of a career of biting the hand that feeds him. His non-book magnum opus was the idiotic 1994 “event” mini-series Wild Palms, which combated Hollywood vacuity with smug references to deep cuts indicating that the writer is more learned than those he’s lampooning; it is, as far as I know, the only mini-series to namecheck Otto Preminger’s Tell Me That You Love Me, Junie Moon.

Maps to the Stars brings the news that actors are neurotic, child stars insufferably privileged, studio executives hypocritical bottom-liners and the entire labor force of Los Angeles just waiting for a big break that never comes. To hammer home the closed nature of this toxic cesspool, the plot brings in incest. There is a scene of actress Havana Segrand (Julianne Moore) constipated on the john, her farts loud and sterile in the way that careless post-sync sound tends to be. Satire! (If this scene needed to be filmed — and I’m not convinced — more resonance and echoing of anal wind within the bowl would really have sold it. This is one of the odder complaints I’ve articulated in prose, and I’m a little mad I even had to think about it.)

It’s been suggested that whatever Cronenberg is doing, he’s not simply Serving The Script but using it as scaffolding for something thornier, a more ambiguously charged drama where softball jokes are camouflage for the ghosts and frights murkily embedded within the script — that a sense of real hurt and damage is obscured but not impossible to pick up on. Another theory is that the thudding sound of each joke falling flat is a deliberate effect, some kind of ambivalently charged interrogation of the project’s fundamental fatuousness. But there’s little reason to believe Cronenberg is directing against a script or creating complicated harmonics with it: in an interview with Nick James in October’s Sight & Sound, Cronenberg says he had no “desire to do an expose of Hollywood […] in fact, I kind of avoided that. [I did it] because of Bruce’s script and my love of his work.” (Then again, at a TIFF screening he noted that if people didn’t like the movie, it was “because of the script,” so who knows how he feels about anything.)

Against this, it must be noted that Cronenberg has been for some time now a master of shot-reverse shot; his precision in collapsing and expanding space between people and executing rack focuses is Polanski/Fincher-level masterful. There’s a moment when Olivia Williams is exiting her bathroom; she turns and stares before gasping in shock at an unexpected intruder. The camera waits in the hallway the whole time like a stalker, cuing us to expect a jolt, but the amount of space and attenuated time it takes to get there is what generates a frisson beyond the expected. Still, I can’t get around the fact that this is a terrible script, and I’m not sure Cronenberg grasps that that’s an insurmountable problem. A salute, though, to Mia Wasikowska, in the year’s most thankless great performance.

I should also say a few words about Cronenberg’s debut novel, Consumed. Reviews of this have been good so far, which makes me wonder if I’m just functionally illiterate and haven’t learned anything in my life so far. This is an intensely self-aware book that knows what readers might expect from Cronenberg (the words “body horror” are dropped in to wink at us); its primary reason to exist seems to be to exorcise all the sick stuff that would take money that’s no longer available to visualize. It’d be an NC-17 production, so that’s a no go, and it certainly seems like the days when Cronenberg would be given a reasonable budget for gross F/X have been left behind, so here we have a lot of disgusting stuff rendered in predictably unflinching prose.

Watching Cronenberg’s grosser movies is a fine and worthy experience, partly because there’s an odd bedrock of compassion running underneath: the protagonists of The Brood, The Fly, Videodrome et al. may be (in many cases) bad people, but they’re also just trapped in a really awful headspace while being taunted by a hostile universe where nothing goes right. Consumed has none of that feeling of empathy with the harassed and those undone by their own bodies and ids: everyone navigating its complex conspiracy (which I’m not tempted to even attempt a summary of) is some kind of one-dimensional construct with their own agenda.

There’s a passage whose juxtapositions are presumably supposed to sum up the major components that must spring to mind when contemplating How We Live Now, but it scans to me like a bunch of Hot Topics vomited up in random order. “Yes, thought Naomi as she netted wildly, here it was: Weber. Capitalism. Vatican. Luther. Entomology. Sartre. Consumerism Beckett. North Korea. Oblivion. Apocalypse.” If you say so! The narrative expands outwards, eventually losing its central starting couple entirely; in many ways, Consumed‘s structure and up-to-the-minute technological worries make it resemble a much inferior gloss on demonlover.

A substantial portion of the book consists of detailed descriptions and dilations on technological gear, especially cameras. A representative passage: “So he was stuck now with the 24-70mm zoom on his primary camera body, the D3. How close could that thing focus? It would probably be good enough. And he could crop the D3’s image files if he really needed to be close.” What’s revealing about these deadly interruptions is that this degree of attention and technical geekery are exactly the traits, I suspect, that have helped Cronenberg keep upping his shot-reverse shot game. So these dull interruptions are very revealing, but that doesn’t make Consumed any more interesting to read. Not a good year for Cronenberg, then, but at least Consumed birthed the fantastic short film/teaser The Nest, so it’s not like the year was an artistic write-off.