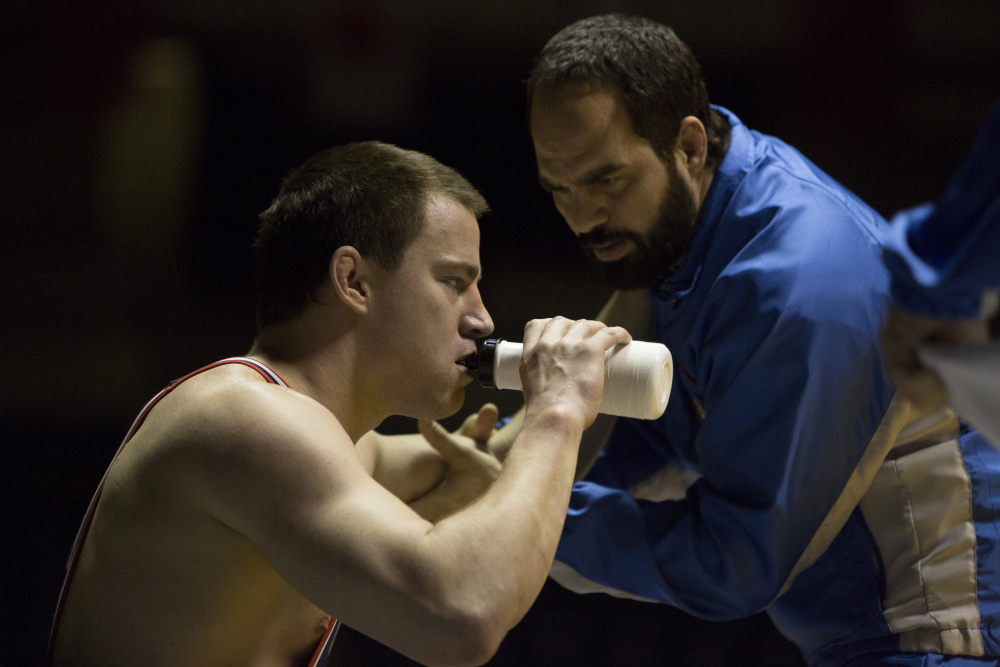 One of the more graceful film segments in recent memory, a literally winning one at that, takes place about an hour into the wrestling drama Foxcatcher, directed with patience and precision by Bennett Miller (Moneyball, Capote, The Cruise). In it, each of four males labors in his own way. Straight out of small-town Wisconsin, impressionable prole Mark Schultz (Channing Tatum), heavyweight Gold Medal winner at the 1984 L.A. Olympics, is already under the spell of wealthy, patriotic, and highly educated John du Pont (a career-best Steve Carell) — less eccentric than deranged, the middle-aged heir to the chemical fortune and a potential father figure for the young man. Mark is his bitch. (“It’s all there to see,” Miller responded when John Anderson of Newsday asked him about the only slightly ambiguous sex scene with Mark on his stomach, du Pont lying above him, on the mansion’s living-room carpet.)

Du Pont’s invitation to live and train on the eponymous family estate in Newtown Square, Pennsylvania — one later extended to enough men to form Team Foxcatcher — is skewed self-therapy. His desire for success in assorted hobbies and professions continually thwarted by issues only an aristocrat might have to endure, he opts for vicarious fulfillment. By showcasing the kid, Du Pont displaces the envy he feels for Mark’s fellow Gold Medal holder Dave (Mark Ruffalo), his confident, authoritative older brother and long-time trainer.

A patriarchal surrogate since their father abandoned them when Mark was two, Dave demonstrates without malicious intent his dominance over his much beloved younger sibling during a friendly tussle. What was supposed to be a casual teaching lesson ends up more impromptu choreography than conventional wrestling, a harmonious dance of synchronized musculature colliding adagio with du Pont as self-employed witness.

This leaves us with one more man. Here we must break the fourth wall and incorporate the auteur. Miller, with the aid of three editors, creates an elegant dissolve between a shot of the writhing siblings on a hotel hallway floor and one of the newly wise acolyte in official combat during a 1987 Olympics match in Clermont-Ferrand. When the bout is over, the referee raises Mark’s hand to certify Gold. The section ends with the otherwise inexpressive du Pont embracing the entire team.

Otherwise inexpressive? What an understatement! Half the time he looks catatonic. No wonder. He is trying to breathe without an air supply. Given that his elitist, authoritarian mother, Jean (a still alluring Vanessa Redgrave, campy in a wheelchair), is utterly contemptuous of what she calls the “rogue sport” of wrestling, and given that she has given him a deep-rooted inferiority complex, and given that he nonetheless gives his team the moniker of one of the family’s traditional pastimes, you could say that he is in a quandary. The situation devolves so far under the radar of ethics, you could also say it is ripe for a killing.

The plot rides on three slim narratives that head toward climaxes known to the public: the humiliation of Mark, the lead-up to Dave’s murder, and the disintegration of du Pont’s psyche. The relatively languorous approach allows Miller the time and breathing space to embellish them. His slow burn makes credible Mark’s transition in response to du Pont’s intense passive-aggressive behavior: from dumb rube with heavy whiff of machismo and Michelin-Man-ish posture into fey boy toy with hair dyed blond and gelled, sporting rouge and eyeliner, snorting coke and kicking back the athlete’s poison of alcohol. It enables us to buy into yet another reinvention of the character shown only in flash-forward after his brother’s demise, one that would seem merely Madonna-ish had we not experienced the one prior.

Du Pont plays Mark off his brother, and Mark buys into it. His benefactor promises to make the public recognize “the great Mark Schultz” as opposed to “the great Dave Schultz.” Mark begins collecting photos of armaments made by the DuPont Chemical Company, accepting at face value the glowing propaganda in a video made by the corporation about its historical significance. The young man has no safety net prepared for a fall. Du Pont exhausts the affectionate component of the relationship with a humiliating slap in the face in front of his teammates, calling him an “ungrateful ape” and terminating his role as team manager in favor of…his brother! (The act is more sociopathic than psychopathic, but genius in its execution.) Mark goes into a downward spiral.

We receive clues over time to help us comprehend du Pont himself, not dissimilar to the way Miller apportioned what lay behind Tim “Speed” Levitch’s manic monologues as a Gray Line Bus tour guide in his first feature, 1998’s low-budget indie doc The Cruise. Du Pont is obsessed with vintage military hardware. Anything jingoistic becomes a cri de coeur. He peppers the rah-rah-let’s-go pep talks to his jocks with head-scratching non sequiturs and ridiculous mixed metaphors that betray not only the short circuits in his brain but also the director’s leftist convictions, which come through with refreshing humor. Lined up in a Riefenstahlian-fascistic variant of a chorus line, heavily uniformed state police practice shooting rifles with him, anticipating the homicide after which some of their number will cart their misguided cheerleader off to jail, from where he will be tried and convicted of third-degree murder.

Dave is the one near-constant — almost immutable from innocent beginning until fatal finish, an affable, generous family man, who in dramatic terms lacks the neurotic edge to be sufficiently interesting to want to explore except in relation to the other two. For example, we learn something about du Pont’s character from his grimaces, the horror and jealousy he feels whenever he comes across Dave and his happy, expressive family. We of course first learn of Mark’s deep-rooted insecurity and need for approval through his contact with his older brother. Mark and du Pont are, in an absurdist world (double meaning fully intentional) the lives of the party.

Miller imparts information visually more often than verbally. It helps to have as your DP someone of the caliber of Aussie Greig Fraser (Zero Dark Thirty, Bright Star), equally at home indoors and out. A cinematographer on some of his own earlier projects, Miller makes certain the camera lingers longer, at least proportionally, on the faces of his principals than in other contemporary Hollywood films: for example, on Tatum when Mark is most bizarrely nellied up, and after he has bloodied himself by pounding his head against a mirror; on a bespectacled Ruffalo when Dave is baffled by his brother’s actions indicative of self-loathing; and finally on a seated Carell when du Pont thrusts his elongated prosthetic nose up in the air, mouth open just wide enough to indicate some sort of mental dysfunction.

Oddly, the immobile green trees on the estate come across just as gray as the overall isolated surroundings appear silent, casting a sad, tragic tinge over the whole wrestling enterprise. And an enterprise it is: “Bought” is a word that keeps popping up. (Initially resistant — “Dave can’t be bought,” Mark tells du Pont — Dave eventually caves and moves his family to Foxcatcher.) For the murder scene, the film flashes forward to winter. A thick white sheet of snow blankets the property. Ironic though it may seem, Miller amplifies the stillness, the better to foreground the three loud pops that pierce the air and sound the death knell for Dave.

The filmmaker rarely shifts into rapid gear, but to such heightened impact. For the make-or-break Seoul Olympics, he jacks up everything: tilts shots, hones in on details, shooting only parts of a whole, only to let it all crash down with Mark’s ultimate denigration. An opponent holds high in the air the ankles of this subjugated foe and forces him to walk on his hands like a pack mule across the ring. Meanwhile in the corner, trainer Dave and purely ceremonial overseer du Pont simultaneously mourn and empathize. Though not the end of the film, the scene could serve as an epitaph for the oddest of menages a trois: Mark Schultz, Dave Schultz, and John du Pont. Many a winding turn, indeed.