ITVFest: Is Independent TV More Than a Bridge to Mainstream TV? 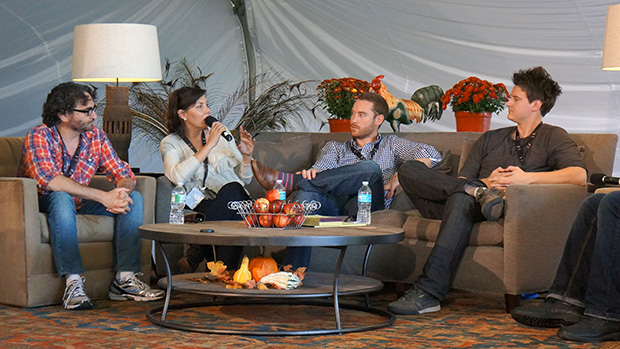 In a small Vermont town on the edge of the Green Mountain National Forest, an hour and a half from Albany NY, the Independent Television and Film Festival (ITVFest) holds its annual get together. Taking place in the fall, ITVFest is very similar to a film festival, with screenings, panels and talks given by content producers. But rather than films, it focuses on TV and web entertainment. ITVFest started in L.A. in 2006, then moved to Vermont in 2013.

I attended some of the screenings of web productions in a large tent set up for the event, as well as a couple of the panels. All four panels had a focus on the business of TV/Web content, with topics including: “Where Digital Content Creates Revenue,” “Independent TV & Web as Big Business” and “Creating Independent Content for the Art or the Money?”

I found the panel “Independent Television: More Than Just A Bridge To Mainstream TV” particularly interesting as the panelists wrestled with what to do if they were given $20,000. Should they make a pilot and shop that around for more money, create a series of episodes and build a following, or pursue some other route? 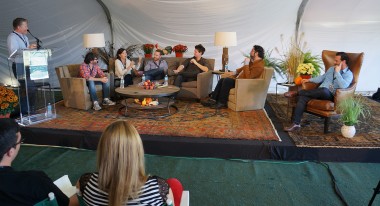 “If you were handled a bucket full of money and it was in the range of $20,000 and someone said, ‘Go make a success,’ what would you do?”

“That’s a lot of money for web. If you get $20,000 and [were] going to make six episodes of a web series I would say, ‘Don’t do that, make a pilot.’ [You] make a pilot to try to find more money or to bring in somebody like Starz to fund it. If you do your own web series and you don’t get a couple of million views on each one, you’ve wasted your time because nobody is looking at it. Nobody cares what you did, unless it’s a specific niche. Then, sometimes, numbers don’t matter.

“At the same time, do something you love. That’s really important, whether it’s the tone or the niche or whatever it is. If you’re looking to do it as a hobby, sure do six web episodes and have fun. But if you’re looking to make it a business, you try to do the TV model: do a pilot, a short five minutes to show a proof of concept.”

“My first instinct would be, I have $20,000, what types of content can I make, and what are all the distribution windows that I can find to monetize it? Whether it’s an on-demand video platform or a Netflix or a Hulu or a pay-per-view model.”

“If I were given $20,000 for a project I would just accept off the bat that none of that money is ever going to come back to me. It’s actually an interesting number because to help fund the second season of our show [Transolar Galactica] that was actually around the number raised through crowd funding.

“A big chunk of that went to investing. We [invested] in equipment and advertising to help spread the word, and also a chunk of that money to invest in an app as a different model to distribute.

“We invested in camera equipment that we knew we would need and use for the rest of the episodes, so it became not so much a budget for the episodes of the show but investing in the project.”

“I would spend more time anticipating future technologies, trying to incorporate them into the storytelling because I don’t know if there’s a specific model [that’s] going to be the same in five years. I think things are going to shift, and if you want to do narrative stuff I think you have to think in larger world terms. Things that can run a long time and draw an audience.”

“I always say this: the pre-production, production and post-production is about 20%. The marketing, the social media is about 80% of your project.”

“Audience cannot be understated. I’m going to disagree a little bit on the pilot because I think that if someone brings me an awesome pilot, sometimes it’s harder for me to crack a show.

“I’m looking for someone who knows how to talk to their audience, and it doesn’t have to be on YouTube. It could be Vine, it could be Twitter, but if you take that $20,000 and everything that’s been said is true, it has to be authentic, it has to be passionate, it has to be smart, it has to be good. But if it’s really connecting with an audience and you’re able to stretch those dollars and you come to me with a million Twitter followers and a great idea and you say I can move these Twitter followers wherever I need them to be, that’s valuable to me.” 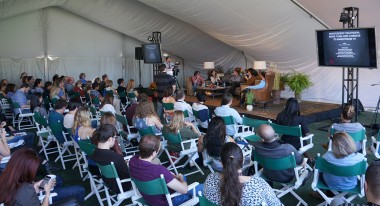 There was also some discussion about audience and monetizing that audience and the increasing important of interacting with the people who are watching your content through social media.

“You have to look at your audience. We were one of the first channels on Roku, and we got [about] 200,000 subscribers. But Roku is not a sharing vehicle. It’s a place to watch, so know what your show is and know where you want to put it.”

Another topic was whether a successful Kickstarter campaign translates into an audience.

“How big? What’s the audience? Are you talking 100,000 people donated, or 500 people and your mom donated $5,000? I look at those numbers and if I see one big number and a few friends you can kind of start telling those things…”

“We are finding that it’s not necessarily a good indicator for follow-on engagement, which is interesting. If you bring me a series that people Kickstarted because they want it and then I distribute it and they don’t show up to get it, well, what happened? There’s a disconnect. They wanted it in the way that you presented it to them in Kickstarter, but they’re not going to go buy it on some other platform, so it’s not necessarily a tremendous indicator.”