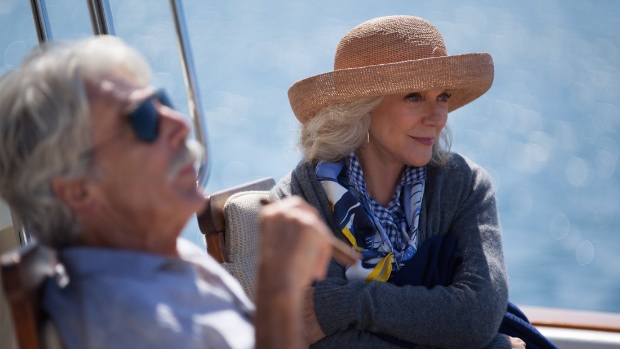 Rob Givens reteams with The New Year director Brett Haley with I’ll See You in My Dreams, a drama starring Blythe Danner as a retired widower suddenly adjusting to the loss of her dog. The film screens in the Premieres section beginning Tuesday, January 27, and below Givens discusses his ongoing collaboration with Haley, why he chose to shoot on the Sony F55, and getting out of the way of the actors.

Givens: Brett Haley and I have been collaborating on films since our early days of film school. We connected as friends along the way and Brett’s infectious excitement for his projects has alway inspired me. He called me in 2008 to come down to Florida to shoot a microbudget film and he sent me the script. I read it and immediately knew it was a project I should take the time out to do. That was The New Year, and for us as a director/D.P. team, it really helped to solidify our collaborative style. We developed a shorthand and a better understanding of each other as filmmakers.

Brett came to me again with the script of I’ll See You in My Dreams and again I had the same positive feeling after reading it; only this time, we would be working with a far more substantial budget. I had been working in the indie film world in the meantime and now that Brett finally had a garnered a solid producing team behind him, it was the perfect opportunity for us to team up again, only now with more experience under our belts.

Givens: It was our goal from the beginning to get “out of the way” of the characters on the page. Cinematically, we agreed that the script would be best served with a very naturalistic, non-flashy style. It was very important to Brett that nothing about the execution should call attention to itself. The goal being that the audience would be able to gently step into Carol’s world without feeling anything thrust upon them stylistically. So with that set of parameters; restraint, subtlety, and communicating a sense of emotional vulnerability were the goals of the camera work. This led us to using a mostly “classical/studio” style, with only very subtle dolly moves, and the occasional handheld work when the scene asked for a little more spontaneity or vulnerability.

Givens: One of the most significant challenges was simply the page count within the tight schedule. The script was at nearly 120 pages with significant amounts of dialogue. This meant, like most indie films, that we had to pack a lot of coverage into every shoot day and we had to make our days no matter what. This necessitates a very economical way of shooting. It also means you have to plan your lighting and coverage meticulously in prep. That lighting plan from prep has to work on the day because there’s very little time to back peddle and try something different. Luckily I had a wonderful crew and the locations worked out very well for us, so making the days wasn’t ever a problem. The pressure was always on but Brett & I knew when to combine shots or simplify to keeping the days right at 12 hours.

Brett and I spent a lot of time in the house location ahead of time and utilized the experiences we’ve had in prepping together on past projects to plan out our coverage very specifically. We wanted Carol’s house to be a character in the film, a vehicle to represent her as much as, say, her wardrobe would. Our production designer Eric Archer really helped that process and taking that time in the space helped us work very efficiently on the day.

Givens: We shot the movie with the Sony F55. After doing tests with the camera I was quite impressed with the way it rendered nuanced skin tones within the S-Log2 Gamma. We shot 1920×1080 HD-SR 4:4:4:4 Uncompressed RGB to the internal SxS cards. I was lucky to have a fantastic DIT, C.J. Miller, who was a great confidant in helping make sure we had things within the low contrast range I was looking to preserve. Shooting at the native 1250 ISO really allowed me to light to my eye and gave a me little more flexibility for the night exterior work.

The lens package was comprised of Zeiss CP.2 Primes and two CP Zooms [15.5-45mm & 70-200mm]. The work horse lenses were the 50, 85, and 135mmm primes. The Zeiss lenses tended to be very sharp so we wore Classic Soft filtration the whole film to take the digital edge back.

Givens: Along with the naturalistic camerawork, the lighting needed to be nearly invisible. For most of the day interiors, we worked with larger sources coming in from outside and passively returning bounced light. I tend to work a lot with “book lights” so our hero setup was a 400w Jolico [Joker bug + Leko Lens] bounced into a showcard across the room and slowed down through diffusion.

Also, the name of the game was simply embracing what a location gave us and augmenting from there with our own subtle keys and edge sources. Kino’s in the florescent environments and bounced HMI’s [with ¼ CTO] in the daylight scenarios. It was a delicate balance, but overall, soft and complimentary was the goal.

Givens: The scene that comes to mind is the police scene on the neighborhood street. This had become a bit of an orphaned scene because of scheduling and the challenge of finding a location that could work for it within close proximity to our existing locations, to minimize a large company move. Brett and I scouted the area around our retirement home location at night and searched for a spot with some pre-existing lighting to help justify our scene and save me from having to light a giant night exterior!

We found a small store building with no sidewalk next to it (lack of sidewalk being a necessary story point). If my crew could have roof access, I knew we could hang practicals from the building to justify some light for the scene. The art department provided these small china hat lights and the scene turned out wonderfully. The flashing police car lights and police flashlight helped spice things up a bit and blend our created exterior. Overall, mostly because of the hilarious performances, this is one of my favorite scenes in the film.

Givens: The look of the film was predominately “baked in.” I relied on my DIT, CJ Miller, to help dial a subtle low contrast look into the dailies and the monitors on set but overall we didn’t stray very far from the original images out of the camera. I had very little hesitation with people watching the rough cuts and seeing my work in its original form. I was very precise with my lighting on the day and tried my best not let any details slide.

But I must say, I’m incredibly happy with the color correction process we had with Color Collective in NYC. Owner/Colorist Alex Bickel and his excellent colorist Mike Howell really helped sweeten the film’s look, elevating the final product in a wonderful way. Mike was able to protect and adjust the skin tones in such a delicate way without effecting other parts of the image. He could do everything with such speed that we were able to really take our time with the scenes to finesse the small details.

We colored the images with a “Generic Film” Colorspace and then over laid a 4K Scan of 64 ASA Kodak Print Stock grain structure. This gave the clean Sony image a lovely texture reminiscent of shooting on the Kodak 50D. It lent the image a slightly diffused look and provided the spontaneity of the moving image we recall from shooting film. Again, subtlety was the key ingredient.