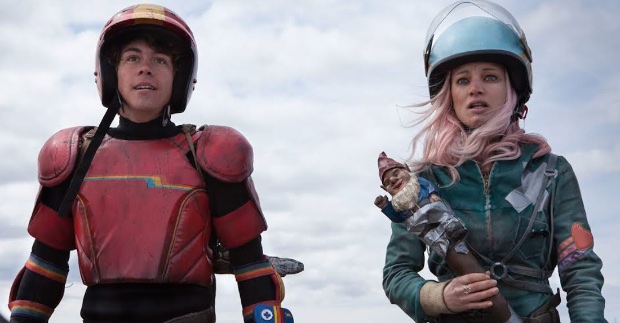 From the RKSS filmmaker’s collective (Anouk Whissell, François Simard, and Yoann-Karl Whissell) comes the Sundance Park City at Midnight selection Turbo Kid, described by the directors as like “some lost crazy kids’ movie from the 1980s that’s somehow has just been rediscovered.” Post-apocalypse gore, BMX bikes and Michael Ironside — Turbo Kid looks back to iconic ’80s kids adventures to inspire, again from the filmmakers, “a whole new generation of warped kids (and crazy adults).” Below, cinematographer Jean-Philippe Bernier talks about how he got those retro looks and summoned the requisite nostalgia on a small budget. Turbo Kid premieres Monday, January 26.

Bernier: Actually, the members of the collective RKSS and I have been friends for a long time now, and I’ve been collaborating with them on projects since 2005. The project “T is for Turbo” initially started for the contest “ABC’s of death”. We had to make a short film with a title that started with the letter T which lead to “T is for Turbo”. We were first in the public votes categorie, which caught the attention of producer Ant Timpson, that’s when the idea of the feature film was born. As soon as the project started, RKSS suggested to the Montreal producers Anne-Marie Gélinas and Benoit Beaulieu that I work on the film and there I was part of the project.

I must say tought, the relationship I have with RKSS is very different than any other relationship I have with other directors. They get me involved as soon as the writing process starts and they give a lot of space for my opinion regarding the general look of the film. That’s why every project I do with RKSS are really personal and very special to me. I know what they like,what they don’t like and I understand their humour and all their references.

Filmmaker: Turbo Kid is based on the nostalgia of the 80s (BMX Bandit, The Goonies, Mad Max, Escape From New York, E.T., The New Barbarians, Cherry 2000, Never Ending Story, La Guerre des tuques…) My ultimate goal was to really capture the specific aesthetic of this era without making it look like a parody or a pastiche. The goal wasn’t to make the audience think the movie was made in the 80s, but it was meant to bring back great memories from the cinematographic era we grew up in, all the movies that made us want to make some ourselves.

In my opinion Super 8 from J.J Abrams & shot by Larry Fong was a great reference. This movie pays tribute to masterpieces such as Close Encounters of the Third Kind, E.T., The Goonies but also keeps a touch that is very actual. Super 8 even though its budget was miles away from our project was for me the best example of what I wanted to achieve lookwise. RKSS and I watched a whole lot of classics from our childhood and we analyzed what was the recuring aesthetic of all these movies; the lighting, the frames, the movement of the camera…

From the begining I knew I wanted to frame in 2.35 and do most of the film on tripod and dolly. I wanted to keep this very classical approach of the 80s family movies. I also went for a more indie and actual approach for the cute love scenes between the two lead caracters by using an hand-held camera very close from the actors. That way we could really be with them in those very intimate scenes and feel their lovestory. For the two major action scenes, we decided to do it with a shaky and nervous camera to get that look from today’s action movies and to get right in the heat of the action. This choice was partly motivated by the small budget we had and the fact that we were under the mercy of the day light, since the location was under the horizon we absolutely had to be fast and effective.

Bernier: There was a very small budget for this film, so we had to work shorter shooting days than usual (between 8 to 10 hours a day in average) and we also had a very small team. It was a substantial challenge to really express RKSS’s initial vision since they like to make extensive shotlist. On our smaller projects we used to do about 50 set ups in a day with only one camera, so for the film we had to simplify a lot and sometime modify the shotlist right there on set. But a cool fact about RKSS is that they have animation background, so they can give you a new storyboard in 5min.

Bernier: When we shot the short film three years ago, I used a Canon 5DMK2 (a camera I had at that time) with an anamorphic adaptor made for the MiniDV DVX100. I really wanted to use the lens aberration of the adaptor to break the video feel of the 5DMK2, in my opinion, the cinematographic beauty of the 80s resides in the signature of the lenses, mostly in the imperfections.

For Turbo Kid, my options were narrowed down a bit since we had an imposed rental house. Right from the begining I had to illiminate the anamorphic lenses that I love so much for their imperfections and specific attribute. So I decided to test the different series of lenses that were available for me to find which ones could give me that retro look. I chose the Zeiss Ultra Prime series as they were the most appropriate for the look I wanted to create. I’ve always been a big fan of the Zeiss lenses, I’ve often worked with the standard prime and the super speeds.

For this film I knew that with the budget and at the speed we had to work, I would have to shoot at a T2 or T2.8 stop and the older Zeiss would be a little too soft for my taste for this project that was captured in 2K Proress for the big screen. After a whole lot of tests, I fell in love with that retro look that the ultra prime gave me at a T2.8 and at a wide open stop without losing any sharpness or any details in the image. I also had a Zentury zoom 28mm-70mm that I only used to do some zoom actions like in the good old ninja movies, or in the spaghetti westerns. I finally ended up doing most of the film at a T2.8 stop with the 28mm, 35mm and the 65mm for the close ups.

Another classic signature from the 80s cinema, was for me, the split diopter (as seen in Brian de Palma’s cinema). On one of the test days, I showed it to RKSS and they instantly fell in love with this look that really allows the use of deep focus without the video look that the T11 gives with the digital cinema cameras. And of course, you get a lot of aberration with those.

Again with the idea in mind to make a nostalgia movie, I think it would’ve been the perfect project to shoot in film, but I knew that I had to go in a different avenue because of the costs and the time that is required for shooting in film, it would be impossible for this project. So I opted for the camera that had the closest look to film, the ARRI ALEXA.

Bernier: Approximately 60% of the film was shot in natural light by using the sun in back light when possible. Once again an inspiration from the 80s movies which used a lot of strong and assumed back lighting. I used the same approach for the interior scenes. Using a strong backlight that was then reflected to create a soft key light.

For the Video Club scene I was inspired by Dean Cundey’s night looks from Halloween 2 and Escape from New York. A saturated blueish night with an orange fire like light and pronounced contrast. Once again my goal with this classic night look was to express the nostalgia that is everywhere in the script of this film.

Bernier: I think the scene, or let’s say the scenes that gave me the hardest times were the ones in Zeus’s Lair, the bad guy played by Michael Ironside. All these scenes were shot in an old disused train shed in which there was also an old empty 15’ pool that was used for a fighting arena. We had to shoot there three days in a row to work inside and outside the pool, on a mix of dialogs, combat scenes, stunts, and gore special FX. We were sprayed with fake blood while it was humid an very cold. It was like torture.

But in the end, even in this ice-cold temperatures, the exhaustion and the intense discomfort of being covered in fake blood, there is nothing more motivating than seing your team laugh at a comic gore FX, to see the actors loving and having fun with their characters, notice the directors jump sky high from the pure joy while watching a cool shot and a great performance by the actors on the monitor. It’s basically because everyday was filled with this energy and this passion that we could get trough the harder days and that made them easier, fun and amazing.