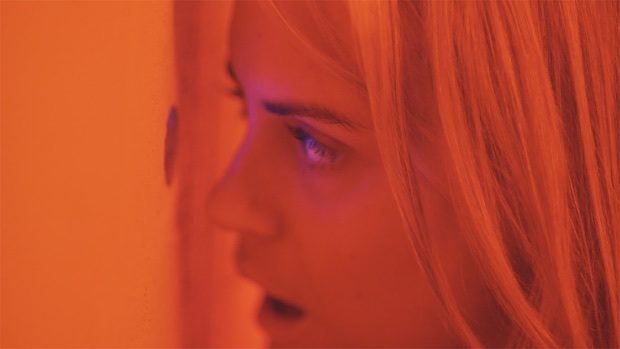 Taylor Schilling in The Overnight

Following 2014’s Song One and 2013’s Breathe In, cinematographer John Gulesarian returns to Sundance with his third film in three years, The Overnight. Directed by Patrick Brice and starring Adam Scott and Taylor Schilling, the film is set during a long Los Angeles night, one in which a chance encounter between two families leads to what the program calls “a painfully funny take on sexual frustration and parenthood.” The film premieres Friday, January 23 in the Dramatic Competition. Below Gulesarian talks about small crews, practical lights, and how a $10 piece of equipment can save the day.

Gulesarian: My wife was attached to the movie first. Our producer Mark Duplass, who she was working with on a television show early last year, gave her the script and she loved it. Mark then asked if I wanted to read it as well and shortly after introduced me to the writer/director Patrick Brice. Patrick and I ended up spending most of March sitting around my house watching movies together and shot listing, and then we shot the movie in April.

Gulesarian: The Overnight is a comedy, so we needed to be aware of what was going to be funny as well as best tell the story. The movie is also very much about the relationships between the characters; sometimes they are becoming closer and sometimes they are pulling apart. The camera should always be reflecting those relationships, but with comedy you also need to know when to see everything and when to hold back. On top of that, the story takes place in one night and the situations our characters are presented with get weirder and weirder as we get deeper into the night, and we wanted the lighting and camera work to reflect that emotional change.

Gulesarian: We shot The Overnight on a very short schedule of mostly night shoots. We were often shooting up to 10 pages a day while racing the impending daylight, and because of this we chose to shoot with two cameras as much as possible. This is always a challenge to me because I believe every shot is telling your story and nothing should ever feel arbitrary. I also think some scenes work best as a single shot, and having a second camera around can give us all a “let’s just shoot it so we have it” attitude. Patrick and I decided early in our planning stages that we would avoid that way of thinking. We always wanted to know ahead of time where we were going to put the cameras, and why. In the end, using multiple cameras really helped us to get through our days without missing any moments.

Gulesarian: Our primary cameras were Canon C500’s with Zeiss Superspeed lenses. The C500 performs amazing at high ISOs and when used in conjunction with such fast lenses it gave us the ability to shoot sharp clean images in very low light situations. We also use a Canon 5D MKIII with a Lomography Petzval art lens and a GoPro for some underwater scenes.

Gulesarian: My approach to lighting is usually simple. For The Overnight we used practical sources as much as possible so that the performances, blocking and camera could be free to move through the spaces without too much “movie” equipment getting in the way. I worked with the art department ahead of time to determine where and what type of lighting could be placed around the set and appear on camera, and then supplemented as little as possible from off camera. Some of the scenes in the movie were lit using unconventional sources such as children’s nightlights, consumer black light tubes, and low-powered novelty strobe lights. The high ISO of the C500 allowed us to push this further than I ever had before. We were working with a small crew, and due to our time restraints I wanted to be rolling the camera as much as possible, and never waiting around for lighting.

Gulesarian: There is a montage in the middle of the movie when all four of the characters are in a pool. We knew that we wanted portions of this to be shot underwater, but on our tight schedule I didn’t want to slow down the production with the complicated logistics of putting a camera and operator in the pool, so I had the idea to put a GoPro camera on an old $10 monopod and just dunk it in the pool and follow the action around with it. We couldn’t monitor the image as we shot so we just rolled as long as we could and hoped for the best. Simple but effective.

Gulesarian: We shot Canon Log with the C500 to retain as much information as possible without using an external recorder. I chose to use the WideDR LUT (REC709 with an extended dynamic range) built into the camera to view on all of the monitors on set. We knew we would be grading a somewhat “low con” look with a lot of shadow detail in the DI and this was a fairly close representation of what that would be. We graded the movie with Aaron Peak at Tool and Dye in LA.