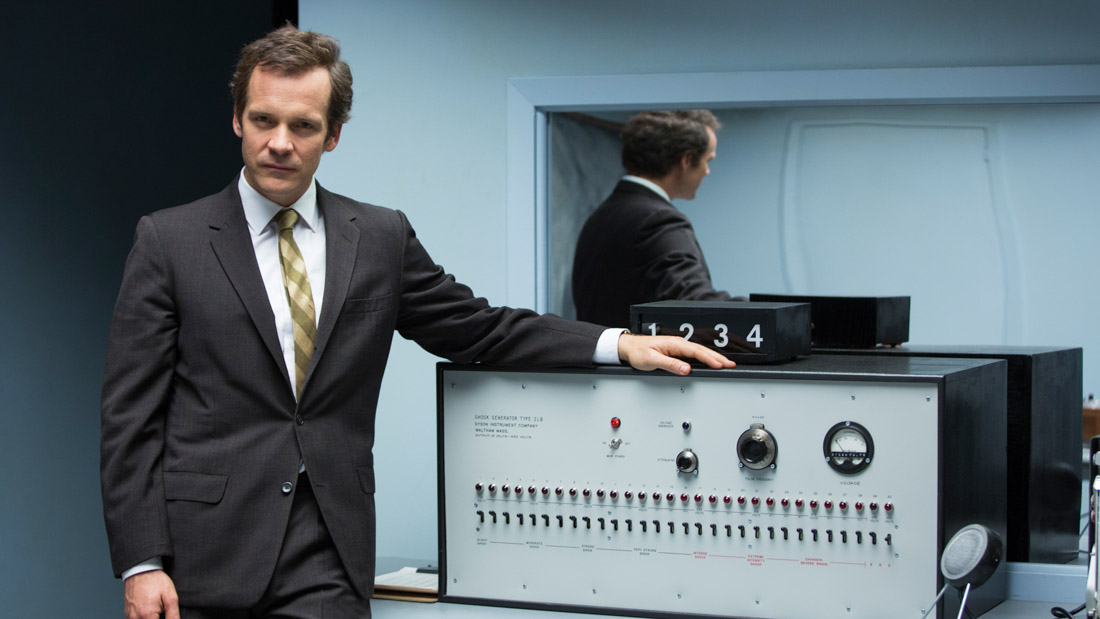 A happy surprise in the Premiere section of the 2015 Sundance Film Festival is a new feature from the prolific independent filmmaker Michael Almereyda. And yes, while Almereyda always seems to be releasing striking and important work, his new feature, Experimenter, does count as a surprise because in recent years that work has been mostly short films and documentary essay films. (One, the excellent Sundance winner Skinningrove, can be watched here.) Now, with Experimenter premiering at Sundance and the new Shakespeare-themed feature Anarchy, starring Ethan Hawke, opening soon, Almereyeda is seeing two theatrical releases in as many weeks — a subject we talk about below.

Experimenter is a biographical drama about the famed ’60s-era social psychologist and researcher Stanley Milgram, best known for a series of experiments about the nature of obedience and social control in which participants were prompted to induce painful electric shocks in other subjects. Almereyda’s film stars Peter Saarsgard as the researcher and features a strong supporting cast include Winona Ryder, John Leguizamo and Taryn Manning. Experimenter has its world premiere Friday, January 25 at the Eccles in Park City.

Filmmaker: Why did you decide to make a film about the Milgram experiment, and why is the experiment relevant to today?

Almereyda: The movie starts with Milgram’s obedience experiments but goes on to depict and acknowledge his other work, experiments that reflect a great deal of curiosity about, and insight into, all kinds of human behavior. His experiments were like precursors of performance art, what Tino Sehgal now calls “constructed situations.” Milgram was incredibly inquisitive and perceptive, observant and creative. His range is a big part of what drew me to him, as well as his playfulness, which isn’t necessarily the first thing you think of when describing the obedience experiments. In any case, the obedience studies constitute Milgram’s first and fundamental contribution, and they’ve left an indelible mark. When you ask about the experiments’ relevance, my response can’t avoid being a bit school marmish. Initially, Milgram was trying to come to terms with the Holocaust. (Relevant enough for you?) More recent history provides plenty of other demonstrations of people blindly obeying authority, following orders that can be considered malevolent, tainted, toxic. When you factor in the current moral vacuum surrounding government-sanctioned torture and surveillance, you don’t have to look far to register Milgram’s relevance and resonance.

Filmmaker: The Milgram experiment famously places its subjects in fraught, morally vexing situations. What strategies did you use with your actors to elicit the complex emotions that would have come up in these real situations?

The question seems to assume that “complex emotions” stirred up in Milgram’s experiments are of a different order than the emotions on display in ANY dramatic situation, in ANY movie. My approach was and is simple. I cast the best actors I can find, provide them with an open and receptive working environment, then do my best to get out of their way. We talked, of course. I shared Milgram’s documentaries with most of the cast, particularly a 1974 BBC program Milgram scripted and narrated, You Do As You’re Told. But this material was applied as an index, a reference. None of the actors delivered direct imitations of their real-life counterparts. At any rate, the movie sets out to ask questions, as Milgram did, about empathy, identity, performance, free will. We were all aiming, it’s safe to say, for a basic emotional truthfulness. The obedience subjects were played by Anthony Edwards, John Leguizamo, Taryn Manning, Anton Yelchin, Tom Farrell, Frank Harts, Danny Abeckaser, Diego Cortez, Greg Kotis, Gameela Wright and Adriana Randall. All hugely interesting people as well as wonderful actors. All hugely interesting people as well as wonderful actors.

Filmmaker: For several years, you’ve concentrated more on documentaries and shorts than features. Now, you have two films — this and Anarchy — screening (one as a festival premiere and one in theaters) within a couple of weeks of each other. Are features a form you’re turning back to now, or was the focus on documentary and shorts simply a result of the funding environment?

Almereyda: “The funding environment,” as you call it, had been inhospitable for a few years — otherwise you’d have seen many more features from me. I’m feeling lucky now; the tide seems to be turning. In any case, yes, over the years I’ve managed to get considerable satisfaction from working with friends, making self-financed documentaries and shorts, and it’s possible that these are as exciting, as substantial, as my features — but of course shorts and docs don’t have an easy place in the marketplace. I’ve also been invited to make essay films – two so far, both twenty minutes long – for the Criterion Collection, included as DVD extras on recent releases. I hope to continue with these and other short projects, even if I pick up the pace directing features.

Filmmaker: Tell us about the formal qualities of Experimenter? Have you employed any documentary techniques in terms of telling this dramatic tale?

I’m more than a little excited about what the folks at Lincoln Center are calling “the art of the real,” and I’ve made things that fit in this category, the threshold between fiction and documentary, art and life. But in most respects Experimenter is NOT that. It’s a straightforward movie that happens to be scrupulously based on particular events in a man’s life and work, events that get played out through conspicuously artificial means. Milgram (Peter Sarsgaard) talks to the camera a fair amount. There are flashbacks and a crucial, abrupt flash-forward. Rear-screen projections occasionally supplant conventional backgrounds. We were aiming to highlight the way some experiences, rituals and routines, are inherently artificial, and to show the strings, as Milgram would have it, that define various kinds of behavior. In a few places we were able to collage in footage from Milgram’s own films. One of the only nods to actual documentary practice came when we re-created Milgram’s “crowd crystal” experiment on a Manhattan traffic island on West 23rd St. Actors stared up at a fixed point in space, a non-existent “something” – and pedestrians would slow, stop and stare at this shared non-event. (We use just a bit of this in the movie.) Otherwise, you could say there was a documentary impulse behind inviting Milgram’s younger brother, Joel, to appear for a brief cameo, and there’s a more poignant guest appearance made by Sasha Milgram, Stanley’s wife, now in her 80s. She calmly stood by, in late afternoon sunlight, gazing up during the re-created crowd crystal experiment.