Five Questions for Rick Alverson of Sundance NEXT Premiere, Entertainment 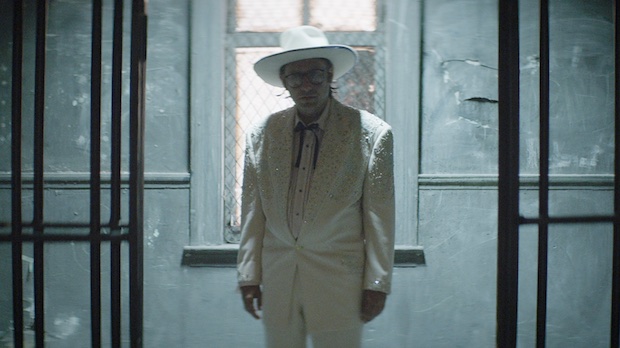 Let’s all be inspired by Rick Alverson and agree to ban the very concept of “sympathetic character” from our movie-viewing brain. We’re all fixated on this idea, that we have to “like” characters and “connect” to them. Instead, let’s just decide to be interested in watching what is put before us, and let’s let ourselves enjoy having our expectations for how we want to feel while we’re sitting in a movie theatre get subverted once in a while.

Alverson — a musician as well as a filmmaker — has made three feature films before this, his latest, Entertainment. Each one is about a man driving himself into a place set apart from the rest of the world. In the second, New Jerusalem, Will Oldham (aka Bonnie Prince Billy) played an overbearing Evangelical Christian, hell bent on saving a newly-returned veteran. In The Comedy, Tim Heidecker (“Tim & Eric”) played a trust funder driven mad by the way that money takes away any consequences for his actions — the worse he behaves, the less it matters, so the worse he behaves. Now, in Entertainment, Gregg Turkington, a legendary comedian well-known for playing the character Neil Hamburger, makes his way to Los Angeles to meet his daughter, meanwhile navigating the dingy swirling drain of small-town comedy clubs. John C. Reilly, Michael Cera, Tye Sheridan, Tim Heidecker and Dean Stockwell also join the cast.

We’re living in a world in which most of the movie-going public believes that “likeability” is an actual word. Rick Alverson’s beautiful, broken heroes just might save us all.

Entertainment premieres in the NEXT section of the 2015 Sundance Film Festival on Saturday, January 25.

Filmmaker: One of my favorite Sundance moments ever was the Q&A at the premiere of The Comedy, where (I’m paraphrasing) someone asked if the title was ironic, and Tim Heidecker said, “Oh sorry, we forgot the quotes.” Entertainment seems like a nice sequel, title-wise and perhaps subject-wise. Are the two movies related, for you?

Alverson: Initially they were only related by an obsession I have with a kind of relentless American utopianism. Both Entertainment and The Comedy look at the imagined end of something. In The Comedy, that end is manifested as the realized American dream of inert leisure. That was coupled with the formal idea of a negative protagonist who would challenge the viewer’s capacity for sympathy. In Entertainment it’s the inverse: the struggling individual who has become psychologically incompatible with the fuel of the American dream and turns on it. Even the title is an inverse of The Comedy. The title Entertainment is a perfectly sincere, indisputable descriptive of the movie and its subject matter. I got a lot of flak for violating the contextual wall in The Comedy, intentionally letting the irony that saturates the characters in the film poison the title and bring doubt to the sincerity of the film itself. That seemed exciting to me, and added a layer of contention and vitality to the framing. It also violated what some viewers and reviewers saw as a holy compact of trust between the honest “author” and the audience. It was both tiresome and rewarding and certainly touched a nerve. I became more interested in the methods we use to watch movies and imbibe entertainment and our increasing reliance on trusting context and “authors,” whether that is the meaningless “terms and conditions” box we check without consideration or our insistence that “good” films play most adeptly and efficiently by the rules or violate them in a way that is friendly to us. So I suppose the two movies are inevitably related. They’re very different creatures to me though, with very different objectives and aspirations.

Filmmaker: How did you meet Turkington? Did you develop the project with him, or cast him after you had a script?

Alverson: I wrote Gregg an email asking him to play one of the friends in The Comedy. He wrote back a very polite, articulate and kind blanket-refusal based on his disgust for those characters and the world they inhabited. It struck a chord with me and I insisted he be involved for that very reason. He was gracious enough to let me insist. I saw him perform as Neil Hambuger, for I think the second time, at a show in my hometown of Richmond, VA. All I could keep thinking of was how sad it would be to see that character step off stage and trudge into the world at a snail’s pace, overcome by fatigue, with a glimmer of hope in his eye. I approached him about a film and he and I talked about Two Lane Blacktop and El Topo, followed by an endless litany of things we hate. Between those many conversations, a road trip with Tim Heidecker through the Mojave desert, and two years of pacing around a backyard in Bloomington, Indiana the script came together, only to be locked a few days before we headed off to shoot. We borrowed the character and set a variation of him off into the wilderness of the prototypical American west.

Filmmaker: Are you a stand-up fan? Would you ever do it?

Alverson: I am not, actually, and no I’m afraid I wouldn’t.

Filmmaker: I’m going to ask the age-old question: why are comedians always so miserable?

Alverson: I venture they are only as miserable as any of us. We just don’t expect them to be.

Filmmaker: The small-town comedy circuit is such a specific scene, so achingly sad, but so many comedians do it for years and years. Why do you think people fall into it? I see it almost as an addiction.

Alverson: I really know nothing about the comedy world at all but what I’ve gleaned from Tim and Gregg over these last few years. I learned virtually nothing about it from making Entertainment. I was interested in other things with both movies. I’ve been to several Neil shows, a few of Tim’s. I understand and love what they do, it makes sense to me. I have fond memories of watching comedians like the Smothers brothers and Bob Hope with my father, but it’s difficult to separate any appreciation of the those types of things from nostalgia. I respect Richard Pryor and Lenny Bruce but wouldn’t consider myself a fan. I find my limited exposure to other stand up to have been scarring. It largely felt cheap and mechanical, like a kind of pornography in its relation to its audience. I find much of it now just as reliant on a particular response as I did when I was a child. Most of it is devoid of confusion and with that devoid of a kind of joy.