The Treasure of the Sierra Madre Underwater: Kevin Macdonald on Black Sea 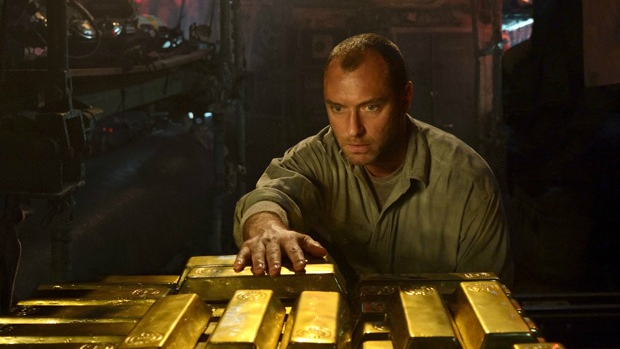 Kevin Macdonald’s Black Sea is a wonderfully entertaining action movie for adults, a hybrid of morality play and thriller that recalls the smart, terse genre films of John Huston and Raoul Walsh while referencing more contemporary issues relating to recent downturns in the global financial markets. It tells the story of recently laid off submarine captain Robinson (Jude Law), a man who has given his life to the sea and suddenly finds himself with no purpose and no way to make a living. When he hears about a WWII-era German U-boat filled with gold just sitting at the bottom of the Black Sea, Robinson sees a way to spring back into action and get rich in the process – the only problem is the eroding loyalty among the team of men he assembles, and the eroding structure of the sub that they’re all stuck in. Tense, involving, and poignant, Black Sea is another of Macdonald’s movies (including One Day in September, The Last King of Scotland, and Touching the Void) about men under extreme pressure. When I sat down with him to discuss the film, I began by asking what inspired it.

Macdonald: For me the starting point was when the Kursk, which was a Russian submarine, went down in an explosion over ten years ago. It was a famous disaster where a lot of people died instantly, but some stayed alive for a while in the sub as the oxygen slowly went out before rescuers could get to them. That just seemed like the most horrible way to die, but after I heard about it I thought, “That could be a movie: guys stuck on the bottom of the ocean in this terrible ordeal.” So once I had that premise, then I had to decide who these men were and what they were doing there. When I decided they were civilians and not military, that’s where the idea of doing a contemporary Treasure of the Sierra Madre came from. I gave the idea to screenwriter Dennis Kelly and he just ran with it – for him it was all about character, so he started with Robinson and explored that man, letting the story build out from there.

Filmmaker: I definitely thought a lot about Treasure of the Sierra Madre while I was watching the film. That and Das Boot.

Macdonald: I looked at Das Boot, which is one of the greatest of all submarine films in its depiction of day to day life on a sub. I also looked at William Friedkin’s Sorcerer and the movie that inspired it, Wages of Fear. Both of those movies are about desperate men who have been thrown on the scrap heap of life and are willing to undertake an extremely dangerous mission. There’s also this sense in Sorcerer of men struggling against these rusting, hulking machines. I actually showed the actors Sorcerer and said “That’s who you are, you’re these guys.”

Filmmaker: What else did you do to prepare the actors? Was there a rehearsal process?

Macdonald: Yes, we took a week before shooting so that everyone would know their characters and know what they were doing. I showed the actors the Friedkin movie and went through the script scene by scene with them, then I had a couple submarine experts come in and give lectures. After that the experts took the actors aside individually and trained them in their different roles – showing the navigator where he would be on the sub and what he would be doing, etc. That way when we got to the sub where we were shooting everyone would know their spot and have a sense of purpose. Jude did his own preparation before all that as well, training with the Royal Navy – he went off with them for a week and lived on a real submarine, fully immersing himself in that life.

Filmmaker: I thought he was terrific in the movie, but he’s not the first guy you think of to play a macho action hero.

Macdonald: Yeah, it was a big decision because he’s not everyone’s idea of a masculine blue collar worker, but I had seen him in a Eugene O’Neill play where he’d done something similar, so I knew he could do it. Dennis and I worked with him on the character for several months, and he did his own work in terms of deepening his voice, learning a regional Scottish accent, putting on the right kind of muscle, and doing what he did with the Royal Navy. Once I had Jude it was great, because I didn’t need to have any other movie stars; we had enough money to pay good character actors, but not so much that there was pressure to cast big names.

Filmmaker: You were just able to go after who was right, which is so important in an ensemble like this.

Macdonald: The only person I cast earlier than Jude was Michael Smiley, this Northern Irish actor from Kill List. Did you see that movie?

Filmmaker: Oh yeah, I loved it.

Macdonald: It’s great. I had seen him in that, and then I met him at a ceremony where he was getting an award for Kill List. I loved how he could be threatening and funny and all these other things, and I went up to him and said “Look, I’ve got this movie I’m planning” – I didn’t even have a script yet – “and I think you’d be perfect for it.” His dad was a submariner, so he took to the idea right away. After I had him and Jude, then it was just about casting the best – and the right – people one by one.

Filmmaker: One problem I could see arising in a movie like this is a difficulty in terms of telling the men apart, but that wasn’t really an issue here. How did you avoid it?

Macdonald: The main thing we did was cast really good character actors who could define themselves subtly and quickly, but then we also tried to keep them very separate in terms of wardrobe and would often give each character one distinctive thing that would register with the audience. Also, people had very different regional accents, aside from the Russians, who all looked very different from one another. It helped that we weren’t making a military submarine film where everyone has a buzz cut and looks pumped – these guys are have supposed to have lived different kinds of lives and have a lot of experience behind them.

Filmmaker: That experience is really palpable. One of my favorite things about the film is how completely convincing all of the actors are in this pressure cooker situation. Aside from what you mentioned regarding prep, how did you cultivate that kind of tone?

Macdonald: It definitely helped that we shot for ten days on a real sub. When Dennis and I were researching the script we thought we’d look at some real submarines, and we fought out that there was one only an hour or so outside of London. It had been bought by this collector of odd things who thought he could turn it into some kind of tourist attraction, but he never made it work so the thing was just out in the middle of a river rusting away. Occasionally the guy rents it out for events and crazy people go out there and party. As soon as I saw it I thought it was too incredible not to shoot on.

Filmmaker: From a logistical point of view that must have been a nightmare. How do you get practical things like dressing rooms and hair and makeup and all that on the sub?

Macdonald: We had to build a pontoon all around it that housed offices and changing rooms and toilets and all that. Inside the submarine there was only absolutely essential crew – the camera operators, me, a sound guy with the rest of the sound department up above recording. It was so complicated getting in and out. If you suddenly needed a mic or something it was a half-hour wait, so we had to be really prepared. It was difficult and added to the budget, but it was worth it for what it gave to the actors. I planned the material on the real sub very deliberately as the first thing in the schedule, because I wanted the actors to experience what it was really like to be encased in a small space and smell diesel in their nostrils and be cut off from the outside world – we were above water, but you couldn’t tell because there are no windows. I know these things are unquantifiable, but I think it made a big difference in the performances. I never regretted it for a moment.

Filmmaker: So after that ten days you moved to a set?

Macdonald: Yes, a set based heavily on the real submarine where we shot. I didn’t want to do that Tony Scott thing where you open up a whole side of the stage and can put your camera anywhere. I was very strict about building the set the same size as a real submarine even though it presented a lot of problems in terms of where to put the actors and where to move the camera.

Filmmaker: How do you keep the frame from becoming visually static or boring?

Macdonald: Shooting in widescreen helps, in that you can have all of the actors in the same frame playing off of each other, which keeps it more interesting than playing it all tight. Our director of photography, Chris Ross, lit it so that it felt authentic but had a certain amount of visual depth and richness. Of course, the real Russian submarine was such a wonderful, textured piece of Soviet design. When it came time to reconstruct it on the stage we tried to keep the sheer quantity of pipes and gauges and buttons and lights, all of which are details that help it feel visually rich.

Filmmaker: You also have some carefully placed flashbacks that serve as a respite from the claustrophobia.

Macdonald: We toyed with not having them and keeping the whole thing underwater, but ultimately I thought you needed moments of something softer – that wide open sky comes as such a relief when you’ve spent so much time in the submarine. It gives the movie scale too. Ultimately it’s all about balance – you also want it to feel somewhat oppressive, so you’re constantly playing one off the other. You want it to be claustrophobic, but you don’t want to overdo it.