“FOR THE BIBLE TELLS ME SO”

Daniel Karslake, For The Bible Tells Me So, Sundance Film Festival 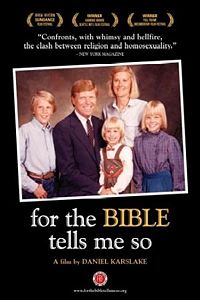 With more eye-catching docs coming out of Sundance in 2007 (Manda Bala (Send A Bullet), Crazy Love, My Kid Could Paint That, No End In Sight, War Dance, Zoo, ect.), Daniel Karslake‘s For The Bible Tells Me So was lost in the flurry, but this interesting look at how decades of religious anti-gay bias is based almost solely upon the misinterpretation of the Bible, the film should certainly be in the conversation as one of the best docs that came out of Sundance ’07. Hailed at festivals around the country and getting an impressive release through First Run Features, this traditional doc brings clarity to an issue that’s been covered numerous times and unveils a film that’s as informative as it is touching.

Known mostly for his work as a producer on the Gay and Lesbian newsmagazine In the Life on PBS, in his debut feature Karslake examines how one section in the Bible, Leviticus 18:22, has been the end game to the issue of homosexuality for most Christians — “You shall not lie with a male as with a woman. It is an abomination.” But with interviews by respected religious figures such as Archbishop Desmond Tutu, Harvard‘s Peter Gomes, Orthodox Rabbi Steve Greenberg and Reverend Jimmy Creech, we learn that sometimes the words in the Bible should not be taken at face value.

While the film debunks myths, it also highlights five families, all from different lifestyles but all believing that homosexuality is an abomination, until one of their children tell them they are Gay. One family highlighted is that of former House Majority Leader Richard Gephardt (his family’s on the cover) whose daughter is a lesbian and how she helped in his run for the presidency in 2004.

If there’s one thing you come away with, it’s that the words of the Bible are so powerful to some that it will blind them from common sense and as it has with women and African-Americans in the past, alienates a group of people. And sadly sometimes causes worse actions.

DVD includes an interview with Karslake. It hits streets this week from First Run Features for $24.95.