“I Don’t Particularly Like Networking…. I Just Care About Making Good Films”: Shih-Ching Tsou on Producing 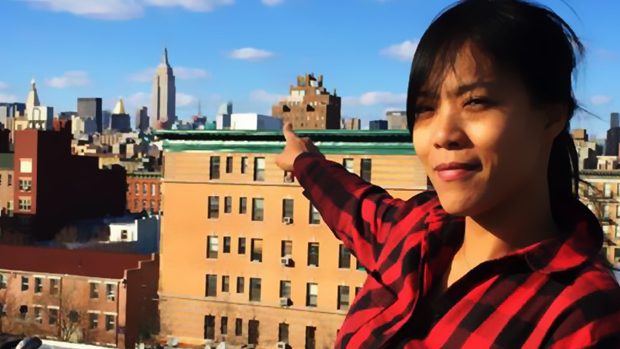 I’m walking up the ballroom steps of Berlin’s Ritz Carlton on the third night of the Berlinale. Around the circular balcony are crowds of men, drinks in one hand, cigarettes in the other. Between sips and drags they survey the arriving guests. The scene is worth checking out — it’s a mix of German film celebrities, socialites and a smattering of film industry who are seduced less by the scene than by the promise of free food. But the sustenance provided during the first two hours is limited to frosted flutes of vodka and second-hand smoke.

Feeling starved throughout a slew of greetings and introductions is a fatal combination. Then again, I often find large social events overwhelming. The people around me seem to find solace in their cigarettes. iPhones serve a similar purpose in New York. These distractions provide little relief for me. I find the self-presentation, particularly after a full day of socializing, tiresome. Especially at a film festival, the whole ritual of networking feels manufactured.

A producer friend of mine recently texted me, “schmoozing…#producerproblems #networking,” so it’s not novel to question the value of the practice. Many justify the charade as a well-intentioned means to build a community of support and collaboration, but the more rebellious find ways to rebuff the frantic exchange of business cards and game of subtle name-dropping.

At the Berlinale gala, I eventually settle in, refreshed by a small group of friends and a table with lots of food. When the DJ starts playing Fresh Prince of Bel-air, I welcome the impulse to dance. Schmoozing may be an obligatory game, but there’s no point to a game without fun.

Preparing me for the social onslaught I find at the Berlin Film Festival was, just a couple weeks prior, Sundance. During my final day in Park City, one particular interaction surprised me. I was included in a circle of introductions on Main Street when I barely noticed Shih-Ching Tsou, confidently hovering on the outskirts. It wasn’t that she was disinterested in meeting those around her, it’s just that she seemed more comfortable quietly taking in the surroundings. When someone acknowledged her as a producer of a festival favorite, Tangerine, Tsou’s aloof humility stood out as extra unusual from the Sundance standard. We shared a brief exchange, and she conceded (borderline unwillingly) to film festival code by sliding me her business card. What surprised me most was her expectation of follow-up: “I’ll wait for your email,” she said. The connection was brief, simple and welcome. Hers was the only business card I needed leaving Park City.

Shih-Ching Tsou was born and raised in Taipei, Taiwan. In her first series of collaborations with writer/director Sean Baker, Tsou co-wrote and co-directed the award-winning film Take Out, which premiered at the Slamdance Film Festival. She went on to executive produce Baker’s fourth feature Starlet and most recently produced Tangerine, which premiered at the 2015 Sundance Film Festival and was picked up by Magnolia Pictures. She has a Master’s degree in Media Studies from The New School.

How did you become a producer?
I fell into filmmaking. I never had producing or directing in mind. When I met Sean, we wanted to make something true to life. We were both into the Dogme 95 wave. It was always just about making something to explore, to discover an unknown world, and share it with an audience. I’m also a graphic artist, which gives me a creative edge, different from other producers. I work in an advertising agency from time to time to pay the bills between films.

What distinguishes you as a “creative” producer?
I was born an artist type, so the business side of producing isn’t natural to me. Creatively, I help Sean put his vision — the look and feel of it -— together.

It’s interesting that you exclusively produce Sean’s films. How did that collaboration begin and how has it lasted?
I came to New York to get my Masters in Media Studies from the New School. In Avid editing class, I met Sean, and we’ve been working together ever since. For me, making film is not about making money. It’s about making a vision come true. It’s hard to find people you can work with because everyone has different visions and creative thoughts. It’s important for me to have a shared vision with similar taste and creativity. I found that in Sean. When you grow out of school, it’s harder to find that connection. We are great friends, like family almost.

And your real family is all back in Taiwan. Has it been hard living in New York without them?
I’m very used to living alone. Since I was thirteen, I lived by myself to be closer to my school. If I lived in my hometown, the train would have taken over an hour. I don’t really miss my family the way regular people may miss their families. I am very independent, and I visit them once a year in Taiwan. When I was at the New School, there were a lot of international students. Most people go back to their home countries. A lot of the American students move away. New York is a transient city. People don’t stay. They have families and they move away. New York is too expensive to have a family.

Do you think you’ll move away, to L.A., Taiwan, or somewhere else?
I don’t know if I’ll move to Los Angeles. If the traffic changes, I may consider it, but it can’t compete with New York — the history, the buildings, the streets, the culture, the museums, the galleries and art. Everything comes to New York. You don’t have to go out searching for culture. The plan is to stay in New York as long as possible. But you can’t really plan because anything can happen, so we’ll see.

Do you ever pause to plan or envision your future?
I don’t plan my life. In the future I hope to still be making movies. It’s really fulfilling, making people laugh, making them think or feel good about life, going to festivals and seeing people’s reactions. You feel like you accomplish something. I don’t think any other day job can compare to it.

What do you like least about producing?
The paperwork — dealing with insurance, credit approvals, the DGA, WGA, scheduling, contracts with actors. I am on set every single day to help with the little details. When you ask generic producing questions, it doesn’t apply to my work with Sean. We have such a small team, and each of us wears many hats, so there’s really nothing we don’t do together.

Did you also handle the sale of Tangerine to Magnolia Pictures?
Mark Duplass negotiated the sale on our behalf and ICM did the deal. Otherwise, Mark and Jay [Duplass] are very hands-off as executive producers. They really trust the team and Sean’s vision.

Who else makes up the core team? Any other women?
Chris Bergoch is the longtime writing partner of Sean so I work closely with him as well. Other than me, the team is male, but I don’t think about that. Gender doesn’t really affect anything. Personality is more important to me. Sean and Chris are both very easy going. I’m drawn to them because they are playful — it sometimes feels like working with kids, so it’s fun. I’m very different, especially because of my background, being from a totally different culture.

Is cultural difference something you feel regularly? How does it effect your work as a producer?
I didn’t grow up in America, so many culture references are alien to me. Sometimes this contributes to the distance I feel. But I kind of like to be different, not just in personality, but also in taste. For example, I really like world cinema, and a lot of Korean and European films. Being a little different, I can reach further. But in terms of the film industry, sometimes if you aren’t in the circle you may not get noticed.

You aren’t in “the circle?”
I’m not a very “social” person. I’m an introvert. I don’t particularly like networking. I just care about making good films. Of course, if you want the film to be seen, you have to play the game.

Do you see yourself ever playing the bigger, more Hollywood or commercial game some day?
I’d love to work with a bigger, or rather, a proper budget. But I’ll always want to maintain the same sensibility, and to make good films.