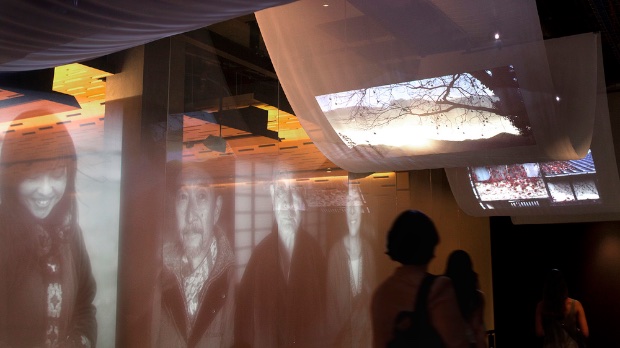 Part conference, part festival – and packed with live events, workshops, parties, and even a “Tech Playground” – FilmGate Interactive uniquely combines cutting edge storytelling with a laidback Miami Beach vibe. I must admit, after reading my colleague Randy Astle’s fascinating interview with FilmGate Interactive founder and executive director Diliana Alexander, my mind’s bar was set high for this young transmedia fest, but this three-year-old event still managed to exceed my expectations and then some.

Along with an enthusiastic grassroots team, producer/programmer Alexander — a world traveling Bulgarian and recent Miami transplant — has an uncanny knack for making FilmGate Interactive feel both global and hyper local. And while I pretty much sampled most of the program over my five days attending — from seeing digital vet Mike Knowlton of Murmur present the ITVS series Futurestates at the cozy O Cinema, to watching Orlando-based CineDrones’ hardware take off at the “playground” exhibitor space inside the massive Loews Hotel — several events specifically stood out for being thoughtfully and expertly curated.

That would include Jake Price’s The Invisible Season, which played FilmGate as a work in progress last year. Produced by POV Digital (and through its hackathon), Price’s meditative web doc is an attempt to return the stories of the Fukushima disaster and its aftermath to the Japanese citizens who lived through it and can recall a time when their beloved city was not simply a synonym for nuclear meltdown. A veteran American producer for the BBC, Price delivered an enlightening presentation of the piece at the Miami Beach Cinematheque, an Art Deco jewel with not only a screening room, but a café, a gallery, a bookstore and even a small library. He discussed the impetus for crafting an interactive doc told through the eyes of four residents — “When people face hardship they lose their identity, become a cliché” — and his unapologetic belief in getting involved with his subjects. (He considers himself a filmmaker before a journalist.) Price also offered his thoughts on changing the language of transmedia to make it more welcoming to traditional filmmakers. “HTML 5 is no different than using a lens,” he observed.

The following day I made my way to the Art Deco Welcome Center on the beach for Price’s accompanying exhibition, an ambient-sound-filled installation that included screens of translucent mesh on which scenes of Japan’s post-tsunami coast were projected. Considering that the artwork featured videos of the survivors, and documentation of dangerously rising sea levels as well, it also deftly served as a wakeup call for places like Miami, forever at the mercy of nature’s tides.

Another worldwide threat simultaneously specific to Florida’s waters was brought to light during the StoryCode Miami Chapter Kick-off at the Cinematheque, featuring presentations by not only StoryCode NYC co-founder Knowlton but Filmmaker columnist Lance Weiler and “25 New Face” alum Elaine McMillion Sheldon. Sheldon, the whip smart creator of the She Does podcast among other outside-the-box ventures, is currently living in Miami while working on her latest interactive project and doc feature about the lion fish — an invasive species with no natural predators that is quickly eating up marine life like a school of aquatic zombies.

No zombies (or robots for that matter) could be found at the MIT Open Documentary Lab seminar on location-based storytelling with Roundware, an open-source mobile platform being developed by sound artist Halsey Burgund. Along with doc filmmaker Sean Flynn (who in addition to his work at MIT is the director of Camden International Film Festival’s Points North Documentary Forum), Burgund delivered an interactive presentation that allowed those of us with iPhones to download his app and then trek outside to wander the neighborhood and collect audio snippets to upload in real time. Though currently being used mostly for museum experiences, Burgund also views his design as a tool to create individual doc “story-spaces.” (Indeed, Price told me that he couldn’t wait to put Roundware in the hands of his own doc subjects, allowing the Fukushima residents to tell their location-based tales in real time as well.)

And lest you fear FilmGate was all tech geek sobriety and no geek geek play, there were also the Miami-themed parties. Though I missed the kickoff soiree, I did manage to swing by The Cabaret, a red-curtained bar with a piano and musically inclined staff for the Miami Vice 30th Anniversary Show hosted by local actress/comedienne Kristy Webb (who studied at Upright Citizens Brigade New York). Billed as an “intellectual re-mystification of visual icons, narrative genius, and male shoulder pads” the night was really more “Hey, kids, let’s put on a show (with shoulder pads)!” The highlight for me wasn’t so much the campy staged readings of several cult episodes but Webb’s mash-ups of the Miami Vice theme song with the openings of other ’80s shows (the resulting YouTube clips projected on a hastily installed screen). Think Golden Girls (bizarre) and Diff’rent Strokes (downright disturbing). Who knew a Jan Hammer ditty could seem so subversive?

Subversive — though sweetly so — is also the word that comes to mind when encountering Raven, a hirsute South Beach legend and the titular subject of Robert Raven Kraft: Unstoppable. A fairly straightforward doc about an unconventional avid runner that played one early afternoon at the Cinematheque – accompanied by a photo exhibit in the gallery – the screening also featured a Q&A with the bearded and wiry Raven, who can be found every single day at 5:15PM at the Fifth Street lifeguard stand. For the past 40 years — come rain, shine, hurricanes or food poisoning — and wearing the exact same outfit (black shorts, one black glove, a black headband), Raven has jogged eight miles up and down the beach, never missing a day. What’s truly heartwarming and inspiring, though, is the fact that since 1975 nearly 3,000 runners from 82 countries — some facing personal demons and struggles with addiction — have run right alongside this remarkable man. (These numbers included, evidently, the majority of the packed, sneaker-wearing audience; one guy in attendance claimed a record 1,700 times!) Notably, the screening was programmed to allow for Raven’s run afterwards, open as always to any and all. And that, digital readers, is some interactive entertainment.