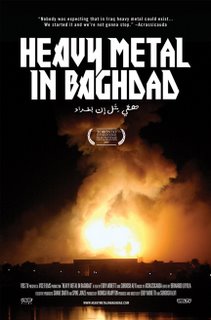 Highlighted in The New York Times as well as our magazine during it’s impressive run through the festival circuit that included Toronto, Berlin and SXSW, Eddy Moretti and Vice magazine creator Suroosh Alvi‘s documentary on the only heavy metal band in Iraq is a gripping account of survival and the escape that music can bring.

The band, Acrassicauda (English translation: Black Scorpion), is comprised of a group of twentysomethings who learned how to speak English through watching Hollywood movies and listening to bootleg tapes of Metallica and Slayer. Moretti and Alvi first heard of the band soon after the fall of the Saddam regime when MTV‘s Gideon Yago went to Baghdad and came across Acrassicauda practicing. He would later write about them in Vice. The filmmakers stayed in touch with them and went to Baghdad a few years later to see if they were still alive. They were and what they captured would be their final performance in their homeland.

The film then hop scotches from Baghdad to Syria where a majority of Iraq refuges are moving to as we see the band members survive in a world that doesn’t want them. And not because they play loud music. It’s also filled with surreal moments in Baghdad that you won’t find on the evening news like an interview poolside at a hotel next to a man swimming laps, but in the background there’s constant gunfire.

Acrassicauda leaves their families in Baghdad and reunite in Damascus. There they put together a concert at an Internet cafe, the first time they’ve played since the final Baghdad gig. The reaction they get from the crowd, and the support of Vice magazine, motivates them to record three songs in hopes to get a record deal. 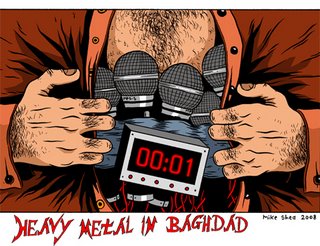 The film concludes with the band looking at some of the footage Moretti and Alvi shot in Baghdad and leads to an explosion of emotion from the group when they see their old rehearsal spot in rubble from a U.S. airstrike.

The strengths of Heavy Metal In Baghdad (which is executive produced by Spike Jonze) is its unflinching pursuit to not only highlight the remarkable drive the band has to charge on in light all the obstocles, including not being able to get visas because they’re from Iraq, but while in Baghdad they shoot in areas that Western audiences have rarily seen, showing the city in a real, unfiltered light.

DVD is currently on sale through Arts Alliance America for $19.95. Disc includes a featurette picking up where Baghdad ends, deleted scenes, 3 live performances and an 8-page booklet including the Yago piece on the band.