“As Spare and Sparse as Possible”: Peter Suschitzky on Maps to the Stars 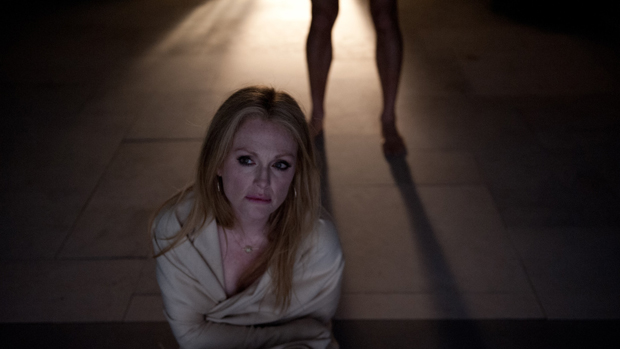 by Matt Mulcahey
in Cinematographers, Interviews
on Mar 10, 2015

Before David Cronenberg evolved – or rather, in keeping with Cronenberg’s preoccupations, mutated – into a respected auteur, he rose to prominence as the purveyor of a distinct subset of genre films labeled as “body horror.” At the heart of his early tales of transmogrification, decay and disease lay an innately human fear of mortality.

In Cronenberg’s latest, Maps to the Stars, the director explores a uniquely post-millennial form of mortality he has christened “pre-death.” In a culture obsessed with recording and sharing, to not be photographed is in some sense to cease to exist. That existential crisis runs through the damaged Hollywood denizens at the center of Maps to the Stars – a fading actress (Julianne Moore), a trouble child actor (Evan Bird) and a physically and emotionally scarred young woman fresh off the bus in Tinseltown (Mia Wasikowska).

Like every Cronenberg film since 1988’s Dead Ringers, Maps was photographed by cinematographer Peter Suschitzky. The British d.p.’s credits also include The Rocky Horror Picture Show, The Empire Strikes Back and multiple collaborations with John Boorman, Peter Watkins and Ken Russell. Suschitzky spoke to Filmmaker about Maps to the Stars’ austere style, his less-than-satisfying experience with the Sony F55 and whether Maps might be Cronenberg’s last film.

Filmmaker: Your father, Wolfgang Suschitzky, was a noted cinematographer in his own right, lensing the cult favorite British gangster film Get Carter and a series of documentaries for Paul Rotha. How did his occupation influence your interest in photography?

Suschitzky: I was very aware of it from my earliest years of consciousness, really. My father would take his cameras out and photograph me a lot, so I got used to their sound and the smell of the leather bags [he carried them in]. As I grew up very occasionally he would take me to a shoot. He was mostly involved in documentary movies in those days when I was very small. It was all very exciting. He had a dark room, which was a mystery room to me and I wanted to find out what happened in there. He’d let me in for short periods of time until I got bored or until he couldn’t work properly.

Filmmaker: At what point did you start taking your own photographs?

Suschitzky: I was pretty young when I was given my first camera. I know today that’s not unusual, but in those days it was unusual. I was given a box Brownie, which was like the Model T Ford of cameras — they were produced in millions. I think I was probably five or six when I was given that camera because I still have photographs that I took of my parents that are from a very low angle, a small child’s point-of-view.

Filmmaker: Was moviegoing an important part of your youth?

Suschitzky: Going to a movie was pretty unusual, but I can remember my first two movies [in a theater]. They were both Walt Disney animated films: Dumbo and Pinocchio. The first films I saw were probably Charlie Chaplin films at home. On my birthdays, my father would ask a colleague of his who had a small projector — probably a 9mm projector — and a small collection of films to come around and show the children some Charlie Chaplin short films. Those have stayed with me all my life.

Suschitzky: It was a thrilling time. The Nouvelle Vague films were just coming out when I was there. I was in Paris at the same time as the opening of A bout de soufflé. It was just the right time, especially when I saw Hiroshima Mon Amour, which seemed to break all the rules of editing and how to treat space.

Filmmaker: You’ve been a major contributor to the work of a contemporary auteur with your collaborations with David Cronenberg. How did you first begin working together?

Suschitzky: He got to a point in his career many years ago after he’d just made The Fly when he needed to change cinematographers because [Mark Irwin], the gentleman who had been photographing his films, left Toronto and decided to try his luck in Los Angeles. [Cronenberg] had a short list of four or five people that he wanted to meet and I was lucky enough to be on that short list. I got on very well with him and we became friends and colleagues.

Filmmaker: You’ve now been working together more than 25 years. How has Cronenberg changed as a filmmaker over that period?

Suschitzky: When I first met him he shot fairly unusual subjects, but he approached them in a classical way in that he would shoot a wide shot, a medium shot and several close-ups for each scene, covering the scene from each angle. Slowly over the years he’s become increasingly economical until we got to Maps to the Stars, when he became super economical and shot very few angles, sometimes only one or two [set-ups] in a scene. He would almost challenge himself to be as spare and sparse as possible. We never covered a scene [from the beginning to end] in each shot. He was certain about what part of the scene he would use in the edit, so we only covered that bit. We only did one or two takes per set-up, which put the actors on edge because after a while they realized they were not going to get another take. He would always reply to their question as to whether we shouldn’t do a second [take], “No, I’m very happy with that one,” in that gently firm and friendly way that he has. [David] is a director who doesn’t like to do illustrative shots at all. He goes straight to the content of the scene. So even if I see a beautiful shot, if it doesn’t serve the purpose of the scene straightaway, he’ll say, “Well, maybe you can persuade me to shoot it, but I know I’ll never use it.”

Filmmaker: How much of that change in style has happened organically and how much is a result of the realities of making contemporary independent films?

Suschitzky: I’m sure that part of the reason we simplified our approach was the knowledge that we had to move quickly. Maps to the Stars was the shortest schedule that David and I have ever shot. I think when we first started to shoot together on Dead Ringers we had 12 weeks. And on [Maps] we had 30 days and we did it in 29. It’s a different world now, making independent movies. It’s always been hard and I’m sure that many of my colleagues have worked on shorter schedules.

Filmmaker: It’s also a significantly shorter schedule than you had on M. Night  Shyamalan’ After Earth. Did you enjoy working on a smaller scale after an effects-driven film like After Earth?

Suschitzky: I enjoyed both experiences, I have to say, but it’s a completely different kettle of fish. On a film like After Earth, you can’t escape the feeling of the machine behind the film. When I work with David it’s a more intimate feeling, working with fewer people and no nonsense, no star treatment or very little. Everything is directed toward getting the best material through the lens, onto the sensor and then onto the screen.

Filmmaker: With After Earth, you were one of the first d.p.’s to use the Sony F65 on a feature. How was your experience with switching to the F55 for Maps to the Stars?

Suschitzky: It wouldn’t have been my choice to shoot it on that camera. I wanted to shoot it on the ALEXA in RAW, but because it was a low-budget movie I was told that it was going to cost too much to shoot in RAW. We would have had to shoot ProRes. I’d never shot ProRes and I had a look at it and it’s not bad, but it’s not nearly as flexible as the RAW image. And I was told financially we could manage to shoot RAW with the F55. But it wouldn’t have been my camera of choice and I’d never go back to it, quite frankly. I don’t want to insult Sony. They made a wonderful camera with the F65, but the 55 had problems for me at that time. One of the main problems was the color rendition, the saturation of the greens and the reds, which needed a lot of post-production work on them. It seemed to me that even by desaturating the reds, the male actors still looked as though they were wearing lipstick, so I had to make windows for the mouths of every male actor [in post]. That’s boring and shouldn’t be so. The other problem was a slightly electronic feel.

Filmmaker: Did you choose to shoot Maps with Panavision PVintage lenses, which are rehoused Ultra Speed Prime glass, to combat that electronic feel?

Suschitzky: Yes, I chose them to try take some of the curse of the sharpness or the electronic look off of the image. I think that’s a general reaction I have to digital photography, which I love. As soon as I shot my first image with a digital movie camera I didn’t want to go back to film. But it is mercilessly sharp, so choosing lenses that are kinder than some of the most recent lenses is the way that I’ve gone up to now. Film can look wonderful, but all film is digitized and is going to be projected digitally so I feel I want to [capture the image] digitally. There are still disadvantages [to digital]. To me, the finder is still a disaster. I haven’t come across a digital finder yet that is as good as an optical finder on a film camera. I’m hoping that there’s going to be a digital finder with millions and millions of pixels in it which will be beautiful to use. But up to now, the d.p. really has to refer to the monitor and that’s a problem because if you like to operate — and I do — then you have to jump off the dolly to go and check the image.

Filmmaker: Maps to the Stars is very stylistically austere – employing long takes, minimal coverage and limited camera movement. You’ve talked in many interviews about your and David’s process of finding a film’s style on the set rather than in pre-production. How did Maps‘ style develop?

Suschitzky: David does have some kind of shot list in his head. He’s prepared, but he leaves a big space open for the feeling on the day that you get from being in the moment and I do the same. Of course, I have to have a vague plan of how I’m going to light an interior, because I have to order equipment, but I’m never quite sure what I’m going to do until I actually start doing it. David and I don’t need to talk about a scene very much at all. We watch rehearsals together and then the discussion is very brief after that. I just hope we make another film together.

Filmmaker: He has talked in interviews recently about concentrating on writing novels rather than making films.

Suschitzky: He said that to me, that he’s not sure that he’ll make another movie and that he prefers writing now. But we’ll see what happens, whether he starts to miss the world of movies or not. I’m concentrating on trying to find another [film] that I want to do and bringing out a book of my photographs, Naked Reflections, which is something that’s going to happen this spring from a Dutch publisher, Schilt. It’s a mixture of street photography from my early years until today, but the bulk of it is a series of black-and-white nudes that I’ve done.