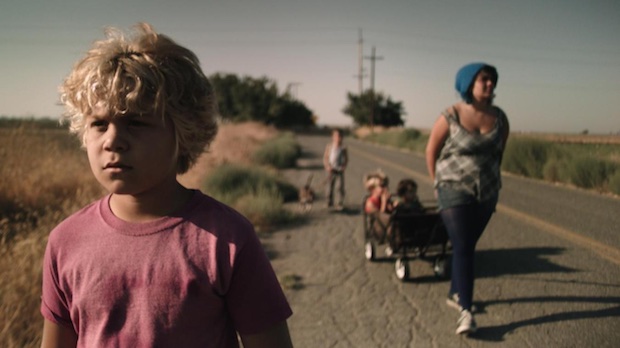 by Sarah Salovaara
in Director Interviews, Filmmaker Videos
on Mar 30, 2015

Winner of the Best Narrative Feature award at the Atlanta Film Festival over the weekend, Robert Machoian and Rodrigo Ojeda-Beck’s God Bless the Child is a naturalistic, quotidian portrait of five children roaming the streets and marshes of Davis, California after their mother skips town. Machoian and Ojeda-Beck capture their characters with both formal remove and striking intimacy, as their interplay suggests the nature of young bodies left to their own devices.

Though the Grahams — Harper, Elias, Arri, Ezra, and Jonah — exist in the film without any parental supervision, all five happen to belong to co-director Machoian, a relation which the pair were particularly mindful of during the production process. Filmmaker spoke with Machoian and Ojeda-Beck about observational scripts, drawing lines between set and home, and the continuity challenges that arise out of structuring a film in the course of one day.

Filmmaker: How did you two come to collaborate, and what is it that draws you to sharing directorial duties?

Machoian and Ojeda-Beck: We attended undergraduate together, met there and then, thanks to a professor who made us take an independent study course together, started making film together. After that course, it just made sense: we had the same work ethic and knew together we could make some awesome films.

We work together differently than the traditional directorial duties, for the most part it’s just to two of us on set. Whenwe are lucky, we talk a few people into working with us, like we did with God Bless The Child, where we had Kirstin Anderson and Robert John Thomas on set. But because it’s normally the two of us, it’s a collaboration all the way around, and directing is just one of the many duties that goes into getting a film made from start to finish.

Filmmaker: The film is entirely scripted, but how did you, as writers, construct a script from such minutiae.

Machoian and Ojeda-Beck: The script came out of a lot of observations. Observing the kids for a really long time, with the idea of writing a script about them. After doing that, it was about taking things we had seen, and then structuring it into a story and a script form. I think to be very focused on minutiae, you have to really, really look and research the subject you are going to write about. We have a lot of interest in that.

Filmmaker: In directing a film almost void of adult influence, it seems the general intention is to portray children as they exist when no one is watching. Is that dynamic changed by the fact that Robert is their father? Or are those roles collapsed when shooting?

Machoian and Ojeda-Beck: Yes, it is the intention to see children portrayed as they are. Those roles collapsed when shooting started, since we both know the children so well, it was a process of directing them to be the characters we wrote for them to be. It was also important for there to be a divide between on set life, and home life, because location-wise they were the same. The kids needed to know that what happened on set was separate from what happened at home, and that they didn’t bleed together. Meaning they wouldn’t get in trouble with Robert as their father, because of something they did to Robert the director, and the same with Rodrigo as well. When we wrapped for the day, those frustrations on set needed to be done; otherwise the kids wouldn’t feel safe and it would have wrecked set, and home life.

Filmmaker: Related, do you find that you work with non-professional actors, or children, differently than you would with ‘pros’? Do you rehearse or workshop? 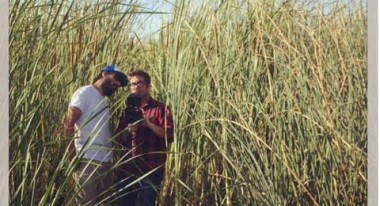 Machoian and Ojeda-Beck: Well in our career we have worked mainly with non-professionals, mainly because of access and finance, so it’s hard to make a judgement there. We worked with one actress on a short and it was amazing! There was this ability to alter takes and try different things with her. With non-professionals, you as a director have to be more precise about the performance you want. You the director have to be better prepared.

We shot digitally so a lot of the rehearsal was during the shooting, we did a lot of takes, because they needed to warm up. We have found it’s better to do multiple takes and let the actors know we are going to do a lot, so they feel safe as non-professionals to mess up and make us do 50 takes if needed. When they feel that safety, they warm up, and with us — depending on the actor of course — they normally nail it at take 11-15, and then what we have is something so honest.

Filmmaker: Production wise, what sort of challenges were presented by the fact that you were creating a film that is supposed to unfold over the course of one day?

Machoian and Ojeda-Beck: There weren’t too many challenges of shooting as one day, [since] we paid attention to light and time of day. When we didn’t have the right light, then we’d shoot the interiors scenes until we had the right light. What was more of a challenge was time. We shot for well over three months, with kids, especially these kids, because they are mixed race, they tan in the summer really easily, and get really dark, Elias and Boo’s hair goes really blond, so there were those challenges. Additionally, in three months, kids grow a lot a few inches, they’ll put on weight and then stretch out, and grow, so that was more of a challenge than the time of day. By the end of shooting, Elias didn’t really fit into his movie clothes because he’d out grown them, and Arri’s pants were high waters. Jonah started the shoot not really talking, and ended speaking in full sentences!  And one day about two-thirds of the way through the shoot, we found Ezra in the bathroom threatening to cut off his hair which would have been a disaster! We had a lot of crazy continuity issues, that is for sure.