Five Questions for The Girl is Trouble Director Julius Onah 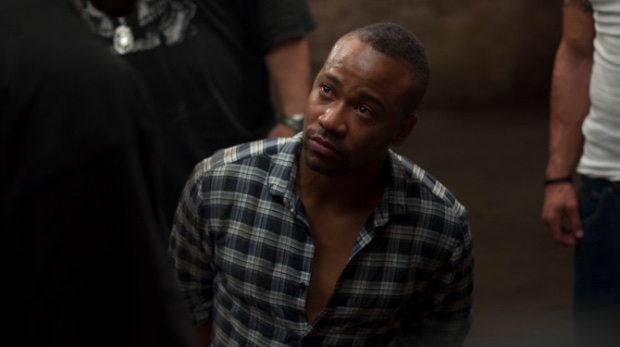 by Scott Macaulay
in Directors, Interviews
on Apr 3, 2015

One of Filmmaker‘s 25 New Faces, Julius Onah sees his first feature, a twisty neo-noir set in the immigrant cultures of Manhattan’s Lower East Side, reach theaters today via eOne. The Girl is Trouble stars Columbus Short (Scandal, and pictured above) along with Wilmer Valderrama, Jesse Spencer and, as the femme fatale, Alicja Bachleda. Spike Lee executive produced this tale involving an innocent DJ drawn into intrigue connecting a missing drug deal to the high-finance world of Wall Street. Below, I ask Onah about working with Spike, the film’s noir references, and a few of the things we talked about years ago as his film was in prep.

Filmmaker: Spike Lee is an executive producer on the film. What was his role, and what did you gain from working with him?

Onah: Spike’s support was integral to making the film every step of the way. It’s rare to be able to get the guidance of a world-class filmmaker, and my co-writer, Mayuran Tiruchelvam, and I really cherished our time with him. We had regularly weekly meetings with Spike for a few months as we developed the script with him. When it came to the moment to start putting together the film he helped us shape our initial budgets and schedules. Spike’s first feature was a contained low-budget film so he understands all the nuances of that type of filmmaking. From there his association with the film opened a tremendous number of doors, from casting to financing and eventually distribution. People took us seriously knowing Spike was involved with the film, and we could not have made our film the way we did without his support. Spike has been a real tireless champion for a lot of young filmmakers, and there is a whole contingent of us that have been able to start our careers because of his support. He’s a true believer in independent film and filmmakers.

Filmmaker: I remember reading the original script, which had a lot of Lower East Side history in it. How does the Lower East Side function in terms of a setting for the script?

Onah: I always wanted the Lower East Side to operate as our fifth major character in the film after our four leads. It represents the meeting point of all the various cultures that historically landed in America. In our film the idea was to see yet again how the mix of cultures clash and co-exist with each other to make the city such a vibrant and lively setting. It’s the reason our “femme fatale” is a visitor from abroad, our “man-in-over-his head” and our “detective” are immigrants, and we get to see how our “heavy” is descended from immigrants. The Lower East Side has historically represented one of the most unique melting pots on the planet and it still does, so it was a great world to photograph. On a personal level I’d lived in the Lower East Side for many years by the time I made the film, and as an immigrant I felt very at home there so it was really exciting to make a film in my neighborhood.

Filmmaker: Another thing you originally discussed in our interview was the script’s construction, which was as a series of short chapters that could be broken up as a web series. Web series weren’t so familiar five years ago, but they are now. Is the web series still part of this project as an alternate version? Why or why not?

Onah: At the time I wrote the script with my co-writer, Mayuran Tiruchelvam, we wanted to explore a non-traditional release for the film. As different parties got involved in the project in terms of financiers, sales agents, and other producers we had to back away from the idea since it posed concerns for the release of the film. That approach is something I still would love to explore for another project, perhaps one that is more conducive and controlled in its budget and scope. Advances in digital distribution have really made what were once unorthodox approaches all the more realizable, so I’m still excited about trying something different.

Filmmaker: Describe your film’s relation to film noir. What films were you influenced in, and what makes your take on noir a contemporary one?

Onah: One of the major influences was The Naked City. Outside of my window in my apartment I could see the exact same block on Rivington Street where Jules Dassin shot part of that movie and where I ended up shooting part of mine. In films like The Naked City and Pickup on South Street, I loved the working-class milieu, mix of cultures and the idea of people trying to rise above the position in life they were born into. So much great noir is about the inescapability of our fates. Those movies always seemed to touch on something very raw and elemental in the pursuit to better one’s self which is so essential to the American identity. Of course, noir was brought into classical Hollywood cinema by European directors fleeing pre-WW II Europe, and those immigrant directors brought their worldview and aesthetics into how they told stories in America. I’m an immigrant myself, and on some levels felt like an outsider telling stories in New York, albeit under quite different circumstances. Nonetheless, I was excited about expressing my point of view on this world as an outsider and to explore a completely different immigrant context that is now dominated by Latinos, Asians, and Africans. That shifted our noir into a contemporary vision of this type of story though the core idea of trying to improve one’s stock in life was still the same. The other key to our approach was that we were not interested in getting bogged down in too much overt homage or pastiche. I didn’t want our characters speaking in hard-boiled dialogue or lighting/staging that harked back to what classic noirs looked like. The goal was to make something that felt modern, alive and fresh that was more shaped by the spirit of the noirs that Mayuran and I both loved. The only direct quote was from the opening of another favorite noir, Kiss Me Deadly. It doesn’t get much better than a barefoot Cloris Leachman running down a dark empty road at night, wearing nothing but a trench coast. That’s maybe the most badass way to start a movie so of course we stole it!

Filmmaker: Between the wrap of The Girl is Trouble and this week’s release, you’ve made not another independent feature but have been attached to a high-budget studio film. What’s been your career path after making The Girl is Trouble? How were you able to move into the Hollywood world, and what advice would you give to filmmakers following in your footsteps.

Onah: After making the movie I signed with CAA for representation. My initial goals were to continue exploring independent projects in New York, and I did a lot of writing. I even had two other scripts under my belt by the time I finished the film. But my agents really believed in the movie and in me and said they wanted to field other opportunities in L.A. I was reluctant at first, but knowing how hard it is to put a film together, I figured why not see what else was out there? The film got me into a lot of great rooms on studio projects, and I found a few scripts I absolutely fell in love with, so I pursued those projects and got attached to them. It also lead to selling a pitch which was great because it gave me more freedom to pick what I wanted to do whether on the independent side or on the studio side. So if there is any advice I would give it would be to stay open to the possibilities. You never know who might respond to you or your ideas and what options that might lead too. And of course to stay prolific in generating ideas that excite you. I was helped by having things I was passionate about when I entered those rooms and without your own ideas you might not be able to fully mine the opportunities that come your way.