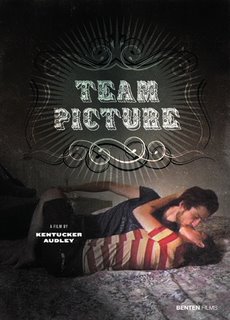 Named one of 2007’s 25 New Faces of Independent Film, Memphis writer-director Kentucker Audley‘s debut feature continues the mumblecore tradition of twentysomethings exploring life and love, but set out in the country where things are a little more laid back than the usual metropolitian mumblecore setting, Audley’s (who’s real name is Andrew Nenninger) tender tale of a young man on the cusp of adulthood is a loose, comedic look at a simple life that grows more complicated by the day.

Also starring as the lead, Audley plays a young musician who spends his days writing songs while lounging in his kiddie pool with his roommate (played hilariously by the film’s d.p. Tim Morton) until he runs into Sarah and goes on a road trip with her to Chicago where he falls for her. But will this puppy love last when they get back home?

Our own Nick Dawson writes an essay for the DVD booklet in the Benten Films release. He writes:

Team Picture feels incredibly real and intimate, and much of this stems from Nenninger’s ability to be uninhibited yet unpretentious in front of the camera. In the awkward interactions with his family, in the slowly burgeoning romance with the girl he meets next door, Sarah (Amanda Harris), or in the moments he sits silently and sadly alone, the camera is capturing — but not altering — his reality. One of Team Picture‘s great strengths is that it gives the illusion that we’re watching people just being themselves. Nenninger’s dialouge is scarily familiar, eschewing overly crafted Hollywood patter for the often comical idiosyncrasies of everyday speech. Tentatively signalling to Sarah that he wants to hang out with her, David tells her he has a kiddie pool. “Do you like enjoyment?” he asks, bumblingly. “There’s actually room for more than one enjoyer.”

Currently on sale, disc also includes director commentary, a new epilogue to the film, a short by Audley and deleted scenes. Cost: $21.95.