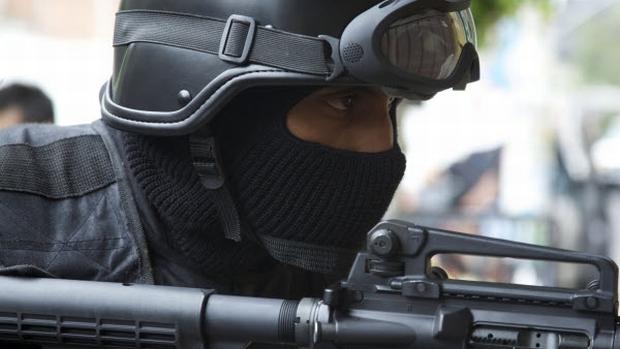 Tenoch Huerta in Days of Grace

by Howard Feinstein
in Filmmaking
on May 4, 2015

“Fate depends on a soccer ball?” Is it possible distributors were discouraged from pursuing the U.S. release of guaranteed cult sensation Days of Grace after hearing such a trite voice-over line? It has been four years since Mexican director Everardo Gout’s marvelous marriage of art and kinesthesis premiered to fine reviews in a midnight slot out of competition at the 2011 Cannes Film Festival. Admittedly naïve about the business end of the industry, I’m aghast that this magnificent power surge of a movie, driven by a zapping vector only occasionally slowed for (sometimes literally) pregnant pauses, has taken so long to reach an American audience.

In order to comprehend the significance of what seems such a banality, we must understand the role of football, or soccer, in Mexico and specifically in this feature debut. A comparison of two cultures might assist. In Australia, the Aboriginals designate as “Dream Time” an uninterrupted era when the world was created and fundamental myths took form. The concept is atemporal, spiritual. 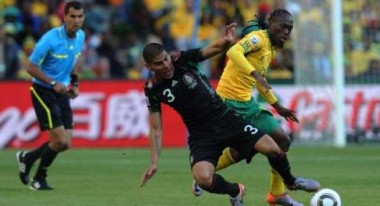 Mexicans, on the other hand, designate a month-long period every four years — “Sacred Time” — that at least sounds similar and could even suggest the same cosmological heft. The latter, though, is far from theological or metaphysical: It is grounded, secular. The weeks of the World Cup comprise this holy of holies. Overnight a spirit of teamsmanship invades a warped social structure. Rules are more or less obeyed. Crime decreases by 30%; the police slack off. The court is in session. The angel is in the details.

When “Sacred Time” is over, the collaborative spirit dissipates back into business as usual: tightly delineated friends and foes, as interchangeable as they are unreliable. Cops and crooks resume their prior oscillating positions. It’s as if sportsmanship occupies a tree’s core, but marred branches of vitriolic enmity thrust out overnight. Teamwork moves aside in favor of oppositions, for which there is but scant, if any, oversight. Criminal hierarchies are once again denied. Legitimate standard bearers are nowhere to be seen. Disorder, corruption, treachery take over again.

Gout questions how the sacred and the profane can exist so potently within the same social fabric. He peppers three interwoven Mexico City stories, in which ethics play little part, with almost relentless references to the sports of football and boxing. Athletics become the measure of a collective shared moral code, however temporary. Why is “Sacred Time” so brief and distinct? Negative social mores are clearly not carved in stone — even if the torture, blood, and guts at times depicted here so graphically may want you to mark off the downside as a total loss.

Boundaries can’t help but blur. The film has such a dubious ethical spine that our primary hero — an idealistic, honest hunk of a policeman named Lupe (the superb Tenoch Huerta, possibly Mexico’s greatest actor) — tells his worried wife and the mother of his newborn son that “being a cop keeps me straight.” Without batting an eye, she understands. She knows the culture. One of his top bosses, a crime boss himself, encourages him to break regulations: “Rules are for referees.”

Lupe’s Achilles heel is that, until he is tested beyond anyone’s threshold, he truly believes in what he does and how he handles himself. He could be the poster boy for Crimestoppers. He is stoic, enduring the pain of a meat hook through his shoulder when (much worse) he is sloppily kissed by an over-Botoxed, sleazy female mobster, The Madrina (Veronica Falcon), who warns him and by extension his young family, “Hell hath no fury like a criminal scorned.” (Another bit of borderline-camp dialogue that has to be sold.)

In a different setting, in other hands, Gout’s fancy footwork might appear exhibitionistic, gratuitous, like the overbaked City of God, to which Days of Grace has been frequently and unfairly compared (expedited editing does not create cousins). But to make some sense of the contemporary morass that is Mexican society, he has to pull out all the stops. Almost anomalously, Gout is a highly disciplined filmmaker. The material does not congeal on its own, without strict direction. Laid on so thickly that the film sometimes defies comprehension, the rule-bound sports scenes are the least of the checks and balances. He assigns guiding structures to control the chaos.

Gout has to deal with poor Lupe’s psychological crisis: He is attempting to synthesize his persona with the savage beast, not unlike the worst of the offenders he arrests, that he recognizes lurking within. And yet Gout has to keep all these elements in check. On top of that, the filmmaker makes clear that at least one of the characters could simply rewrite the entire scenario from a different point-of-view. This is but one example of the self-reflexivity running through the film, including TV scenes, videocassettes, movie references, and loads of photos useful for blackmail or evidence.

Gout pushes the distancing. From the beginning, characters act their parts. In the very first scene, Lupe pretends to be an abusive rotten cop to frighten the sons of his partner’s friend away from a career selling dope. He refers to himself as a hyena that guards its turf (his place of retreat is a dilapidated shack eerily situated next to rows of unmarked crosses in the desert outside Mexico City). Later, after vengeance overcomes integrity as his driving force, he sees himself as “a tiger who must play like a tiger.” There are all kinds of beasts.

Crooks feign legitimacy, respected professionals are complicit in illicit deals. The posing is manipulative. According to the voiceover of protagonist number two, teen Iguana, aka Doroteo (an excellent Kristyan Ferrer), a pugilist whose life uncomfortably straddles the universes of crime and humanity, “In Mexico you gamble with your life every day. Sometimes you win, sometimes you lose.”

The film so lacks chronology that a summary of  the action and events does it an injustice: We put the whole together. The particular crimes take place during three successive World Cups: 2002, 2006, and 2010. Some involve straight theft, others kidnapping. All have a strong dose of official injustice. There are many additional subplots, but at this point it’s best not to list them all. The film is nothing if not busy. I’ll minimize plot spoilers, but some information is required in order to understand Gout’s well-thought-out rationale behind his technical choices. Portions of the latter might not be of specific interest to some readers. Skip past them.

The style is so intricately entwined with the narrative that the storyline and formal overview can only be presented in tandem. The camera constantly moves, up, down, sideways, with long tracking shots, though Gout will go static or use Steadicam if the material demands it, plus slo-mo, animation, tight close-ups, aerial views. Not surprisingly, he worked with Baz Luhrmann  and has directed a number of commercials and music videos. The cutting (by Herve Scheid, whose credits include Delicatessen) is as free in its way as the cinematography (by Luis Sansans, from Y tu Mamá También and Romeo + Juliet).

With his expert crew, Gout sketches each of the three periods, in an effort to differentiate one from the others—and following all these stimuli coming at you simultaneously is a difficult task. Three different versions of Gershwin’s “Summertime” are a loose aural connecting thread. And the recording artists! Nina Simone, Janis Joplin, Scarlett Johansson. Gout must be a charmer.

As noted, the film begins with an important faked encounter between Lupe and two young drug dealers, including Iguana/Doroteo, who appears in all three stories. Lupe patrols the labyrinthine streets of a poor neighborhood with his burnt-out older partner, Melquiades (Mario Zaragoza). For his courage in reining in some exceptionally vicious suspects, he receives a commendation from Commandante Jose (Jose Sefami) and a coveted spot on his elite “Gold Squad.” Its corrupt officers indirectly involve Lupe’s family.

To follow Lupe closely, this segment is shot in the now-rare 16mm anamorphic format, with harsh light and an edgy style, and Nick Cave and Warren Ellis’s brutal music dominating. Gout told the DP to “follow the actors,” not the reverse. Sansans uses a wide 3:1 aspect ratio. He found uncoated Russian Lomo lenses that added special flares and texture to the images. 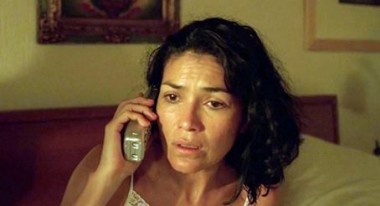 Victim X (Carlos Bardem) is kidnapped. Most of the story is told from his point-of-view. Iguana, now a confused adolescent, serves as his guard and reveals an empathy lacking in the other gang members.

A shift from confusion to coherence requires changing formats from Super 8 to Super 16 to 35mm spherical, with an aspect ratio of 1:1.85 throughout. The older stock creates scratches, double exposures, and moments out-of-focus. They use in-camera techniques. The images become more static as Victim X becomes more confined. Gout uses electronic music by Atticus Ross that he found to be both cerebral and visceral.

Wealthy businessman Arturo Lozano is kidnapped, but this time the perspective is that of his family, especially his strong wife, Susana (the piercing Dolores Heredia). She begins to feel duped by her brother-in-law and legal reps. She decides to go outside the law and manage the ransom on her own. At the same time, she discovers her husband’s infidelities and money-laundering activities. Her long-time pregnant servant — she will not tell who the father is — happens to be the older sister of Iguana, so she comes under suspicion.

Most of the work is done with Steadicam and telephoto lenses denoting entrapment, the eternal waiting for news from the kidnappers. They used spherical lenses here as well, with an aspect ratio of 2:3.5, which makes this section more psychological than physical. Gout hired Shigeru Umebayashi (In the Mood for Love) to compose soft, sophisticated music to help shape Susana’s femininity and strength against the pressures of time.

There is now some resolution (or disposal) for each of the principal characters. Their transformations, their journeys are extreme. Gout and Sansans leave nothing to chance. Besides the wide variety of formats, they use quite a few different stocks, including several color negative ones. Without such meticulous strictures, only an amorphous blob would appear on the screen instead of this obsessive masterpiece.