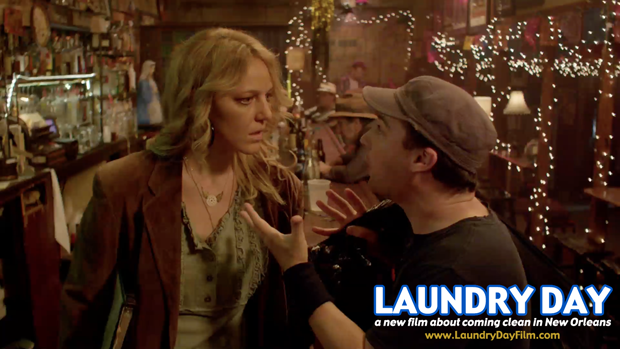 Randy Mack is in the final three days of his Kickstarter for his New Orleans-set Laundry Day, and with roughly three grand to go, he lets loose with an acerbic howl against the indignities of crowdfunding that, he hopes, might make you think and, perhaps…. donate.

People are the worst, and there’s nothing more humiliating than pandering to them. You became an artist to push back against sheeple’s sacred cows and conventional wisdom, and now technology has risen to empower… them. Not you. The Popular Ones. The last people on Earth who need empowering.

Popular people, remember them? The ones who dominated the gossip of your dullest classmates for no good reason. Charisma, perhaps, but so little substance. The exact opposite of — random example — your beloved A/V club (RIP).

Now you’re doing a crowd-funding campaign, very much against your will. You’re not a people person, you’re an ideas person. When Barton Fink talks about “the life of the mind” you laugh at him yet nod silently with vigor. Cheerleading, that’s for Other People; ya know, populists. Ew.

And yet you must. But how is a merciless observer of humanity supposed to engage them? As Dudley Smith told Ed Exley, “You have the eye for human weakness, but not the stomach.” You read Filmmaker, you’ve seen all the dashed-off crowdfunding sales pitches posing as essays, you’d never stoop so low. You are above manipulation: you have too much respect for the people you don’t respect to use the things they love against them, to give them things they’ll love.

That’s merely bad. Here’s where it gets sick: the fastest way to popularity (and social media clout) is to mingle with the already-popular. Behold: America’s tabloid media mindset infection. “Oh-em-gee that guy is so cool, he was at a party with Nikky Perri’s boyfriend’s best friend’s sidekick from that TV show I heard about on Conan.” Leveraging celebrity attention is a sycophantic ourosborus, an Escherian staircase of shame leading to ass-kissing ass-kissers who’ll kiss the ass of ass-kissers kissing higher ass. It’s blowing the fluffer for the opportunity to suck dick in public. It’s also Rule 1 of Celebrity: you’re nobody until somebody well-known admits you exist. God created Adam, but Adam could only name-drop a snake he barely knew, so he was velvet-roped outside Le Jardin d’Eden nightclub, oh never heard of it, don’t worry the bouncer sells blow to Joaquin’s assistant’s dog-walker’s agent, we’ll get right in.

The worst part is, it works. For the charmed, effortlessly. Pandering so natural it doesn’t even feel like it, a slight-of-hand so subtle it turns a blatant beg into friendly assist. Is it a weird side effect of Millennials’ total lack of independent thought, the ability to hit lowest common denominator without a twinge of self-consciousness? And who are to you to judge, when it clearly works for everyone but you?

Fine, shove this porcupine into a sheep’s costume, nobody will notice the pin cushion waddling around demanding a hug (while picking their pocket). No, forget it, it’s futile. You don’t know who Soulja Ménage is, you cann’t celebrate the catalogue of Young MC, you don’t wear ironically bad colors, and you’d rather talk to an old man than binge-watch anything. The only thing that works is “Be yourself” and yet the only other thing that works is “Entertain everyone compulsively all the time.” No squaring that circle, go home, leave filmmaking to the new PT Barnums.

And yet… And yet… There are those nights, in memory, of selling veteran crew members on a crazy Hail Mary of a no-budget film. Of bargaining camera houses down to day-for-week rates. Of holding court before a crowd of skeptical actors after losing half a day’s shooting due to incompetent production and inspiring them to give the best semi-adlibbed performances of their career. Of rallying an exhausted crew after four weeks of shooting to stay focused and on point. That’s the person you need to run this damn campaign. They didn’t give a damn about dignity or pandering because they were hell-bent on getting the job accomplished.

So find that inner person, figure out what motivates ’em, then strap on and take ’em for a ride. You can’t stoop too low, you can’t bend too far, you can’t leverage too hard. Face it, irony is dead, that’s why Tom Lehrer retired. It’s Poe’s Law: nobody can tell the difference between joke pandering and real pandering anwyay.

– don’t say it with words, say it with an image with words
– images must contain cats, food, Betty White, Mr T, Richard Simmons, a cartoon and/or a spaceship.
– celebrities’ words matter more than yours. If Tesla was alive today, he’d need Edison to RT him, and that’s why he’d only have 400 followers on telegraph-twitter
– there is one litmus test to know you have a true fake voice online: if you can’t figure out why you’re so popular, you have it. If you can’t figure out why nobody’s paying attention to you, you don’t.
– everyone loves a cheerleader, nobody likes a fake. If you have to fake cheerleading, you are worthless and you will die alone.
– subversiveness only works on old people and phonies
– aspiring to something beyond artisan beer is incomprehensible to millennials. Let them know your movie is hand-sewn by pregnant indigenous prisoners on whale-bone mandolins.
– old people want to think you’re the Dylan of film. Jujitsu them by saying your film is more like punk rock Leonard Cohen. It’s like flipping a turtle on its back.
– when in doubt, use the royal “we”
– there’s no longer any such thing as a stunt