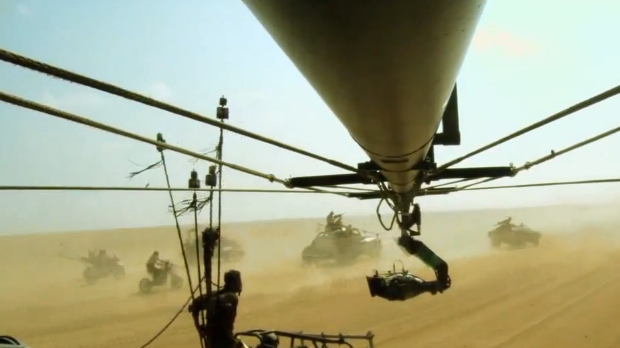 by Trevor Hogg
in Cinematographers, Interviews
on May 12, 2015

As much as Max Rockatansky (Tom Hardy) struggles to survive in a post-apocalyptic world where primitive warlords rule the desert wasteland and women are enslaved, Australian filmmaker George Miller had to battle financial difficulties, security concerns, and heavy rains turning the desert location into a landscape of wildflowers in order to bring the fourth instalment of the Mad Max franchise to the big screen. A further complication occurred when veteran collaborator Dean Semler left for personal reasons just before principal photography was to commence on Mad Max: Fury Road, leading to the Oscar-lauded cinematographer being replaced with Academy Award winner John Seale (The English Patient), who had previously worked with Miller on Lorenzo’s Oil (1992).

Seale: The film was developed on storyboards. It was hard in a way to keep up with almost thousands of little images. I couldn’t understand what was going on from one little drawing to another to see how it flowed. George and I went to work together in a car along with Guy Norris, the action unit director, and first AD P.J. Voeten who had hammered it all out. They were so far ahead of me again because they had been at it for 10 years and knew every stunt, where every truck went, what it was doing, who jumps off of the truck, and where it explodes. I was trying to catch up even though I was studying the storyboards. Every scene and shot was intricate. It is a very fast cut film. There’s not one shot in the film that doesn’t pay its way.

Seale: George is right. It is a good old fashioned Western with the Indians trying to get to the stagecoach. Some of stunts are extraordinary and have been worked out in a modern way. A lot of the times the truck and cars weren’t moving when the impact occurred. The cut had to be after or during the impact. It couldn’t be before it, because the car wasn’t moving, therefore not in continuity.

Filmmaker: How much green screen was there?

Seale: There was an enormous amount of green screen. The 40 to 45 percent of the film with the beautiful Charlize Theron and five beautiful girls in the backseat who are all involved in getting that truck to a certain point and back again is done without the truck moving. The visual effects boys built big hydraulics rams and could put the entire semi-trailer tanker onto rams and rock that thing. They could throw you off of the roof if they wanted to, which they nearly did a couple of times on-set! George and Dean, as far as I was concerned, had honed the use of simtrav [simulated travel] on the other Mad Max films. George has learned the value of wind. Whenever we did simtrav we had the biggest wind machines. They were stirring up dust, and making the hair and wardrobe move.

Filmmaker: What led to the use of the EDGE camera?

Seale: That’s a piece of camera equipment which is built in America. It’s a Toyota Tundra truck with a big engine in it with a lot of carbon fiber mudguards. It has a stabilized crane on the roof which has a stabilized camera on the end of it. It’s the most awesome piece of filmmaking machine I’ve seen in my life. What it could do was so good we got another one out. I’d say that Brooks Guyer, the operator on our main Tundra, would have shot 50 to 60 per cent of the movie on that vehicle. They had the trucks doing 50 to 80 kilometers an hour across the desert.

Filmmaker: How many cameras did you end up using?

Filmmaker: What types of lenses were used?

Seale: I’m a zoom man and always have been. We had a lot of Optimo zooms which everybody loved. The Steadicam boys and action vehicles carried them.

Filmmaker: What lighting issues were encountered?

Seale: In the initial instance when George was building his own 3D cameras from scratch to facilitate the use of them inside the cab of the truck, it had to be small enough to go through the side window of the truck. There wasn’t a 3D camera built that small in the world, so George started literally eight years ago to build his own cameras and they were awesome things. The chip wasn’t the best. The sensor didn’t have a good range. That was causing a bit of angst. When you have five gorgeous girls in the backseat you want to make them look good. It defeats the purpose of having them there if you can’t light them with a softer light. For some reason about two or three weeks after I came on in pre-production George suddenly said at our meetings, “We’re not going 3D. We’re going 2D.” He shattered everybody a little bit but it certainly freed us up. The liberty of the 2D cameras was incredible because the ALEXA sensor was much better and the ALEXAs are good battle proven cameras.

As far as the lighting was concerned, once we went to 2D I was able to use smaller units of light that were LED base. Creamsource lights are built in Australia and our gaffer Shaun Conway [The Great Gatsby] took those over to Namibia and they proved to be fantastic to light the interior of the truck. They were mobile. We can handhold them, and therefore fit them between multiple cameras. They had all of the power that we needed and were dimmable. Most of the lighting was simple. It was lighting to satisfy a desert film. There wasn’t that much there. There were a lot of interiors in the beginning and the end but that was done on a film stage in Sydney and a little bit in Cape Town. It was standard lighting that was worked out in pre-production by Dean Semler.

Filmmaker: Did George Miller make use of a video village during the principle photography?

Seale: Dean Semler and George were going to run the picture from a command vehicle which was setup with a RF contact visually to all of the cameras. George was going to be talking on what we call “the voice of God,” which is a speaker placed in the cab of the truck. His voice would boom out over the vehicle and everybody could be hearing what he was asking or thinking. When I came on-board I wanted to be an operator. I love operating one camera. Generally, it’s the third or fourth most important camera. My ideal world is to have freedom on that camera to be able to pickup little shots that we don’t talk about but try to make those of a value to the editor. But in those early stages George was doing the one camera deal so I wasn’t looking strongly. When George asked me where would I be when we were shooting, I said, “I would like to be a designated operator and I would be out on the flying bridge in the thick of it.” He said, “That’s where I’ll be.” For a while there, George was out on the flying bridge hanging on tight and rocking around at 80 kilometers an hour across the desert. But not too shortly after we started shooting George did find that the monitor in the command vehicle was all set up and he could sit there and watch. As we shifted into more multiple cameras George liked having the facility in front of him to be able to watch each camera; he slowly segued back into the command vehicle and left us out there to shoot it. Often Doug Mitchell [producer] was there with a few other people. Not many because it was a small truck. It wasn’t one of those elaborate video village type deals.

Filmmaker: How much of the imagery was altered during the DI process?

Seale: George’s manipulation of the image that I gave him is incredible and intense, and was always meant to be that way. George has learned by doing animated films the value of the computer and what it can do; he knows also the value of how live-action can be integrated into computer generated imaging. George bought his own Baselight. [For eight months] the colourist was grading the edited material. Visual effects would look at that, paint their images to match, send it back down to the colourist, he would then grade that in and it would all be seamless. To me it’s an interesting way to make movies and one that will catch on.

Filmmaker: Is there a particular scene that you are looking forward to seeing on the big screen?

Seale: There’s a scene in the middle that I’ve heard through the grapevine is quite emotional. In fact, some of the sound recorders were known to have been a little teared-up about it. If that’s the case this could be a really good one because it has an emotional plain to it that maybe the others didn’t have. When we shot it the scene was emotional, so I can’t believe it being any other way in the final film. It will be interesting to see that one.

Filmmaker: How does Mad Max: Fury Road compare to the previous instalments?

Seale: I was not involved with the early ones but certainly having watched them I believe that this one has gone back to the more simple Road Warrior [1981] where the survival of what was in that tanker is the name of the game. This one is the same except that it has a female Road Warrior [Charlize Theron] who steals the truck from the citadel and when she turns left onto Fury Road and the guy with the binoculars says, “We have a runaway.” That’s when the movie starts. But it’s the reason why she breaks away, it’s the reason why the emotional scene in the middle occurs, it’s the reason why the rest of the film takes place the way it does, and the results of those actions are more the mainstay of Mad Max: Fury Road than it just being massive wham bam stunt film.

Trevor Hogg is a freelance video editor and writer best known for composing in-depth filmmaker and movie profiles for sites such as the CGSociety, 3DTotal, Live for Films and Flickering Myth.