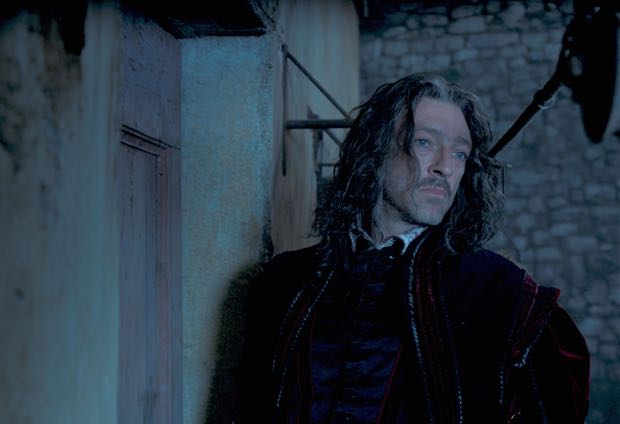 by Ariston Anderson
in Actors, Festivals & Events, Interviews
on May 22, 2015

He’s played a troubled youth in the Paris ghettos in La Haine, a vengeful husband in Irreversible, and an abusive ballet company director in Black Swan. One pattern is clear with French actor Vincent Cassel: he works with directors of a special breed who can’t be boxed up neatly within a genre.

His latest Cannes film is no exception. Cassel partnered with Italian director Matteo Garrone to play the role of a casanova Medieval king who’s always on the search for his next sexual conquest in Tale of Tales. Based upon the stories of Giambattista Basile, Europe’s original fairytale scribe, Garrone doesn’t leave out any of the graphic details that Disney usually scrubs from its animations.

Behind the king’s superficial exterior and obsession with flesh is a character deeply afraid of aging and being alone. It’s a role Cassel plays with a lot of humor, but equally with sadness. Filmmaker caught up with the actor in Cannes to discuss working with Garrone, Italian cinema and how Irreversible changed his career.

Filmmaker: Were you familiar with the works of Basile before signing onto the project?

Cassel: What really drew me to the project itself was very much the director. The rest was the material that he chose, and I was just happy to discover this author that I’d never heard about before. Actually, I don’t really care what it’s about. It could be anything. It’s just about the director, because you can tell any kind of story. If it’s well told, it’s interesting. There are what I call real directors, someone who has a real vision. To make a movie is not very difficult if you are a bit organized, but to make a good movie, it’s practically impossible.

Filmmaker: What surprised you in making this film?

Cassel: On paper it’s not an obvious project. It’s a very different kind of movie. It’s not like you read it and say, “OK, this is that kind of movie.” When you read it, it’s like what kind of movie is that going to be? Who’s the good guy, who’s the bad guy? I don’t know. It seems like even the ogre is nice at the end. Also, in terms of images, I was amazed when I discovered in the movie that you can say a lot with one frame that doesn’t move.

Filmmaker: How was it for you to make a film in Italy?

Cassel: I’m a huge fan of Italian cinema. I really grew up on Italian cinema. To me, cinema is Italian, or, eventually, Italian-American. No, but it’s true! There’s something in the sensibility. There is a sensuality about Italy. The Italian movies that I really like, from the Golden Era, they had everything. In the same movie there was humor, drama, social commentary. It’s very generous cinema.

Filmmaker: Do you feel like Italy has reached a new golden age of cinema?

Cassel: Matteo, to me, is obviously one of the, let’s say, three or four really good directors of his generation in Italy. But I mean, in Italy a young director would be Matteo [who’s 46]. In France, a young director is 23. I guess their industry doesn’t let young directors blossom. In Italy, and also in Brazil where I live, all the young directors are doing TV now. That’s the problem. They go straight to TV and then they ruin themselves doing it. It’s like the Mafia, you know. They take everybody and they crush them.

Filmmaker: How did Irreversible change your career?

Cassel: I knew exactly what we were doing. I have to say that most of the foreign jobs that I had were because of Irreversible. I think directors are in general pretty fascinated by Gaspar [Noé]. Sometimes it’s been totally embraced. In Asian countries it was, oh cool yeah, very nice. And then, in some very Catholic countries, people would totally freak out. I’m always freaked out when somebody comes up to me and says “I’m a huge fan of yours. I really liked Irreversible.”