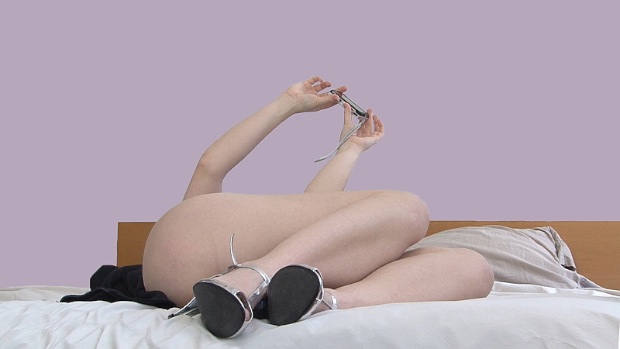 by Lauren Wissot
in Directors, Filmmaking, Interviews
on May 29, 2015

I’ve known Amsterdam-based, San Francisco-bred, Jennifer Lyon Bell ever since we met over half a decade ago at Brooklyn’s much beloved Monkey Town — back when a DIY, Williamsburg performance space could afford to host a Sunday brunch for CineKink Film Festival award winners. (Bell’s Matinée took the Best Narrative Short prize, while Un Piede di Roman Polanski, an homage to Roman Polanski’s foot fetish I co-directed with Roxanne Kapista, nabbed Best Experimental Short.) Since then Bell’s films have been both banned (Matinée from the Melbourne Underground Film Festival by the Australian Film Commission in 2009) and celebrated, most recently in the U.K. and Canada. Her latest, Silver Shoes, available from PinkLabel.tv, premiered at London’s Institute of Contemporary Arts and won the Feminist Porn Awards 2014 Movie of the Year.

Filmmaker: Could you talk a bit about PinkLabel.tv and why you’re so committed to working with them?

Filmmaker: I hadn’t heard about the Holy Fuck Film Festival until you alerted me to it. Is this the fest’s first year? It certainly wasn’t around when I spent time in Amsterdam a few years back.

Bell: Yes, the Holy Fuck Film Festival is having its very first year in Amsterdam. We filmmakers are pretty jazzed up about it. The last erotic film festival in Amsterdam was the one I co-organized from 2007-2009, the Rated X Amsterdam Alternative Erotica Film Festival. Before that, it was only the Wet Dreams Film Festival way back in the 1970s! Rated X had a huge buzz and sellout shows. We loved putting it on, and I think it significantly contributed to a deepened discussion about sexual representation in cinema in the film community. But our team all had other jobs and we just couldn’t keep it afloat as a full-fledged festival.

In making Silver Shoes I’m just trying to capture a very personal experience of what’s arousing to me — a woman who appears very feminine but likes to play with her masculinity, a fellow who seems surely gay but is not. As to whether these interests of mine are also popular with other viewers, I was relieved to see that the reaction to Silver Shoes is far better than I ever expected. It’s a gamble when you’re making unusual porn. People naturally like to know what to expect, and Silver Shoes is full of the unexpected. That’s one reason I worked hard to make a trailer (in two versions, PG and X) that would give a sense of what kind of people and relationships and sex you could expect to see. It’s getting a ton of views because I think people are curious.

Filmmaker: I recently interviewed Erika Lust, who you personally know, and who is also part of what seems like this ever expanding, grassroots, feminist pornography movement. There’s definitely been a backlash against female pornographers in the U.K., but as a longtime American expat in Amsterdam, do you feel it’s still easier to work in Europe? Or does the Internet make production location irrelevant these days?

To view Silver Shoes on demand visit PinkLabel.tv. Or buy the DVD at Amazon.