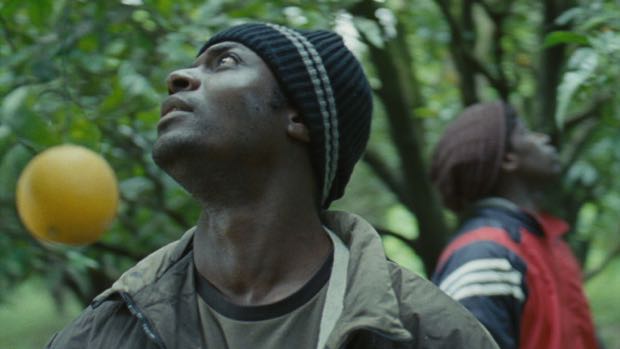 by Ariston Anderson
in Directors, Interviews
on Jun 8, 2015

Few films at Cannes were as reonant as Mediterranea, the first feature from director Jonas Carpignano. The film follows Ayiva (Koudous Seihon) and Abas (Alassane Sy), two men from Burkina Faso who board a migrant boat toward Italy via Tunisia and Libya. Their boat capsizes, and they are among the lucky that make it ashore. When they finally arrive to Rosarno in Southern Italy, instead of finding a land of promised opportunities, they discover only a hostile society and blatant labor exploitation.

Mediterranea is expanded from Carpignano’s short film A Chjana, based on the 2010 Rosarno race riots that shook Italy. Another character who features prominently in Mediterranea, Romani boy Pio, was the subject of his short film A Ciambra, which won the Discovery Award last year in Cannes. Carpignano’s next project will expand Pio’s story into a feature-length film.

The director’s exploration of the same universe of characters is no accident. He lives in Rosarno, where he shares a flat with Seihon. Carpignano, who worked on Beasts of the Southern Wild as a second AD, is part of the new spirit of collective filmmaking that focuses on the joys of collaboration rather than one man running the show. Rather than preaching, Mediterranea masterfully brings a human face to a grave issue in Europe, where constant stories of capsized migrants boats fill the evening news and societal racism often seems to be an accepted and ignored phenomenon.

A 2012 Filmmaker Magazine new face in independent film, Carpignano has proven himself to be a singular voice in today’s cinema landscape and we can’t wait to see which stories he unravels next.

Filmmaker: What was challenging about turning the short in to a feature length film?

Carpignano: A lot of it felt very, very similar to the way we made short films. We had the same crew, a lot of the same actors. We’ve sort of created our own infrastructure for making films down there. It’s our own family, so it felt very similar. The one thing different was that we had — let’s call it the babysitter this time. If we were a bunch of kids running around playing, this time we had a babysitter who was making sure we were home by ten. That was a little bit difficult because we’ve been used to just doing things however we wanted, whenever we wanted. We were able to do that to some extent but certainly less than with the short films.

Filmmaker: Do you plan on continuing to make films in a collaborative way?

Carpignano: Absolutely. I love it. It just feels great. It’s an extra added energy when it doesn’t feel like a job and when everyone believes in what we’re creating. It adds a completely different energy that I think can make you stretch your resources further than you normally would be able to, because everyone really, really cares. We’re not going to leave until what we need to get done is done. If it’s a more professional shoot it’s like, “Well, location’s gone, money’s out.” No, here everyone’s going to stay until it’s done.

Filmmaker: Was it hard to get a film about this topic made?

Carpignano: Definitely. I think that everyone’s very sympathetic because of the topic. No one’s going to say, “No, I don’t want to have that kind of film,” because that would just make you look terrible. But at the same time, with that kind of film, people didn’t think that people would be lining up across the country to see it. I think what surprises people with this film is that it’s not about the topic. You can have a very emotional connection and engagement with the story. So, yes, the topic is immigration but I feel it’s just much more about these two guys and their journey.

Filmmaker: Was there any day on the set where something went wrong where you had to adapt quickly to the situation?

Carpignano: I’m trying to think if there was a day on the set when something didn’t go wrong, and I don’t think so. It was crazy. Everything that could have happened did happen. It’s Italy. It’s a small town. A lot of things went wrong. It’s a part of where we shot. For the market scene, we’d been there shooting all day and there’s this huge disaster at this other place we needed to shoot, so we had to go shoot there right away. So, we packed up our stuff and left to go shoot. When we came back to finish the scene, everything had been stolen. Absolutely everything in that market had been stolen because no one locked the gate. No one was surprised and no one was upset. So, you know, terrible things would happen and we would just look at each other and laugh, like, that’s today’s story.

I think living specifically where I live has taught us to be kind of flexible. I mean, the first time we got down there we had our car stolen. Things like that have happened to us since 2010, since the first time we got there. Once you just adapt and know that anything can happen at any moment, you’re ready for anything.

Filmmaker: Do you hope this film will help change immigration policies in Europe?

Carpignano: I do, but I don’t know if it’ll change. The goal for me was never to make something overly didactic and to try and change policy in Italy. For me it’s enough if people stop looking at this as a group of migrants, or immigrants, and start thinking of them as individual people. I think that the more we can identify and see some of ourselves in their experience, the more compassion people will have. And I think that’ll help the situation.

But I don’t have overarching aspirations for policy change, because in Italy it’s a bureaucratic nightmare to do anything. So for me I’m really just trying to engage on a more human level. If more people can respond to this story, then I think we’ll be happy that we’ve done our job.